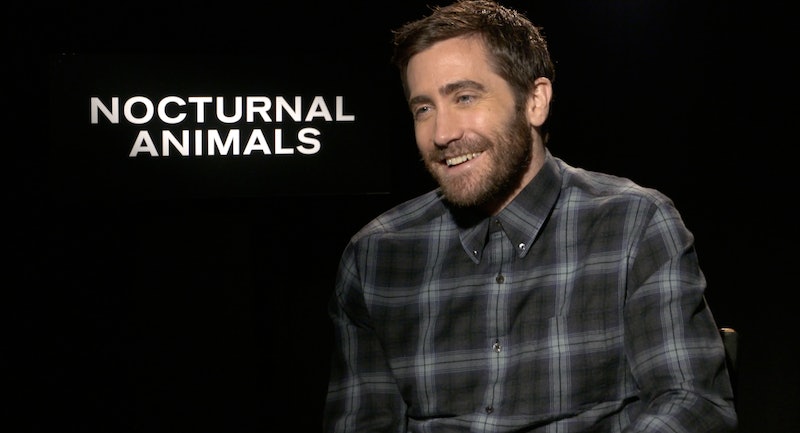 A seasoned actor since he was a child, Nocturnal Animals star Jake Gyllenhaal has had his fair share of talented female costars. In 2001 Gyllenhaal took on a twisted teen in Donnie Darko and shared the screen with Jena Malone. Since then, he's shared screen time with more than a dozen impressive women, including Jennifer Aniston in The Good Girl, Rene Russo in Nightcrawler, and Rachel McAdams in Southpaw . And now, Gyllenhaal acts opposite five-time Academy Award nominee Amy Adams in Tom Ford's stunning Nocturnal Animals. Not bad for a guy who got his start talking to an invisible, demonic rabbit.

Gyllenhaal's career has had an upward momentum since he began more than 15 years ago, but the seasoned actor realizes the road to success may have been more difficult if he was a woman. At the Los Angeles junket for Nocturnal Animals Gyllenhaal opened up about what he's learned from his female film counterparts, and expresses a newfound realization that misogyny exists more than he had ever realized in the film industry.

"What I've learned is that women are far superior in so many ways," he says. "[But] I've seen how hard it is to be a woman in this business in particular..."

And hard is an understatement. In 2014 The New York Times reported that less than two percent of directors were women in the top 100 grossing films. Not only that, but 95 percent of cinematographers, 89 percent of screenwriters, 82 percent of editors, 81 percent of executive producers and 77 percent of producers were men. Yikes.

Gyllenhaal goes on to talk about his relationships with the women in his professional life, and how they've helped him realize the differences in equality of the sexes, particularly when it comes to Hollywood.