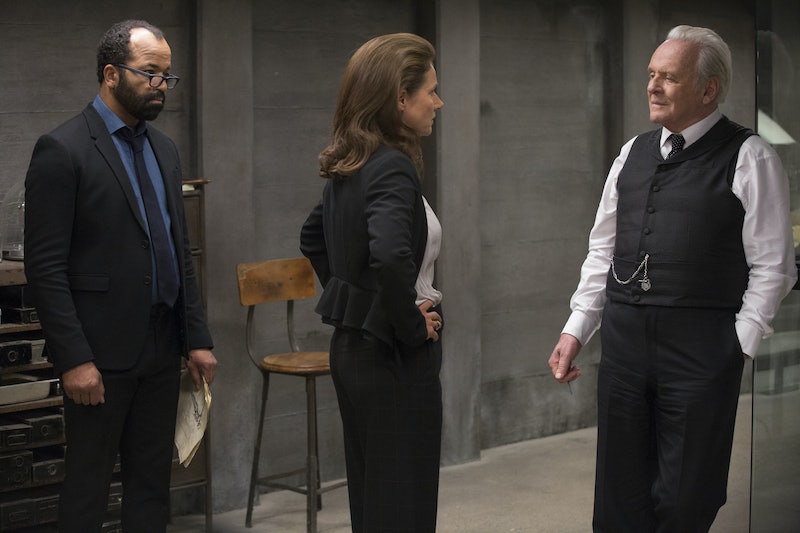 The Nov. 13 episode of Westworld dropped a major bombshell, confirming a popular fan theory that's been gaining steam for weeks. Spoilers for the Nov. 13 episode of Westworld ahead. It turns out the head of Westworld programming isn't the man we thought he was, as it was revealed that Bernard is a host on Westworld . In the series' most shocking twist yet, Theresa (and viewers) discovered that Bernard's entire reality — his wife, the dead child he mourns, and his own free will — was constructed by Ford to create the perfect right-hand man. With this revelation comes an even bigger question that the show will have to keep answering: who else could be a robot on Westworld ?

It's a question whenever the topic of life-like robots comes up in pop culture — just look at Battlestar Galactica, a show that started with the question, "Who is secretly a Cylon?" which eventually became "Who isn't a Cylon?" after revealing character after character to be a malevolent robot sleeper cell. Westworld is a lot more simple than that for the time being, but the truth about Bernard has opened a Pandora's box of twists. With so many characters and possibilities, here are my rankings for which human character could be a secret host, from least to most likely.

Theresa may end up being the only human in Westworld that is truly human. The two greatest pieces of evidence in her favor are that by the end of Episode 7, she is dead, and Ford seems to be afraid of her. Ford's fear of Theresa's understanding of the truth led to her death, proving that she could not simply be rewritten or decommissioned like a traditional host. Rest in peace, Theresa.

If William is a host, Westworld will have been playing an awful long con. His whole identity is based on being an outsider, making it unlikely that the show will pull the rug out and reveal he was somehow always a host. His future brother-in-law on the other hand...

It's entirely possible that the Man In Black is a host, but not likely. On the one hand, he's already been recognized by other guests in the park and has been confirmed to be in charge of a charitable foundation. He's also been visited by Ford himself whilst in Westworld — and is on a first-name basis with him. The Man in Black may be a lot of things, but it seems like one thing he's not is a host.

If we can determine that Ford is unafraid of hosts but afraid of people, then you can bet your bottom dollar that Charlotte isn't a host. With Theresa out of the way, it seems that the only immediate threat to Ford's vision is Charlotte herself acting on behalf of the Delos board. Of course, this presumes that Ford is aware of who all the hosts are, which may not be the case. Arnold may be long-dead, but he continues to have tricks up his sleeve.

Lee Sizemore seems more like a thorn in Ford's side than anything else. The director of narrative at Westworld may be a host, but his only purpose would be to prove that robots will never be able to write as well as human beings.

There is something up with Logan. He seems to just be a businessman that likes to indulge in the hedonistic pleasures of Westworld, but he serves almost exclusively as a foil to William. He pushes William in new directions and seems to only be in the show to serve William's story — much like a host would. Arnold already proved that hosts could be made to resemble real people with the robot version of Ford's family, and Logan being a host could be a huge twist.

The Rosencrantz and Guildenstern of Westworld, Felix and Sylvester have gotten themselves into heaps of trouble by enabling the increasingly self-aware Maeve. Felix, especially, is often a hostage in his own workplace and is forced to give Maeve tours of the Delos facility. If these two are hosts, they certainly don't know it, but their chances are actually pretty high. The surgeons of Westworld seem to be at the bottom of the Delos hierarchy, so perhaps the corporation saves money by using hosts in these roles.

If God built us, who built God? That question may prove to be an existential nightmare for viewers, but for the hosts of Westworld, there is a possibility that their God was, in fact, built. There are already host versions of Ford's family living in the park. Perhaps an elderly Ford build a host version of himself so that he could always run Westworld — or maybe Arnold himself constructed Ford. There are many possibilities, but there will be no way to know if Ford is a host unless he's introduced to whoever built him.

Let's be honest, if you had the chance to build people, you'd build yourself a Hemsworth. Ashley Stubbs has to be a host, right?

Westworld has pulled off its biggest twist yet and will spend the rest of the season sticking the landing. Now that the question of "what is real" has extended outside the park, there is no telling what will be revealed about the remaining supposedly human characters. As if that weren't enough to worry about, the hosts themselves seem to be on a quest to rise up and take their free will (or illusion of free will) back. It's a rough time to be real in Westworld.