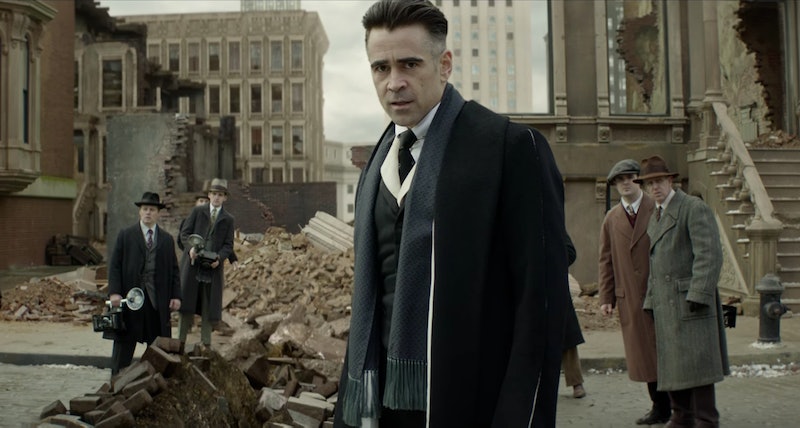 In case you don't already know, Fantastic Beasts and Where to Find Them isn't really just about a case of magical creatures on the loose in New York City. Early trailers for the film hinted at a larger conflict taking place in the Wizarding World regarding their relationship with non-magical people — Muggles or No-Majs, depending on what continent you live on. This conflict, as well as the fact that the film takes place in 1926, right in the midst of Grindelwald's rise to power in Europe, suggests that tensions between wizards and how they relate to the outside world will be the focus of the Fantastic Beasts series. And, with Johnny Depp recently announced to be portraying Grindelwald in the sequel, fans are wondering, is Grindelwald in Fantastic Beasts and Where to Find Them ? Spoilers ahead!

The short answer to this question is yes: Grindelwald is in Fantastic Beasts and Where to Find Them . In fact, he's a supporting character in the film and even — gasp — appears in the trailers! If you're scrambling to figure out how you could have missed Depp in the trailers, don't worry, you didn't. Depp isn't in trailers, but Grindelwald is — he just looks a bit different. At the end of Fantastic Beasts, it's revealed that Graves, the auror who is tracking a mysterious dark magical force terrorizing New York City, is actually Grindelwald in disguise! (And, yes, we do get a Johnny Depp cameo.)

As Graves, Grindelwald infiltrated the Magical Congress of the USA (MACUSA) to hunt down the Obscurus (dark magical force) terrorizing New York. This reveal at the end explains why Graves was so quick to blame Newt and Tina for the mysterious attacks, as well as his affection for Credence and his knowledge of the Deathly Hallows. Still, there are a lot of questions left unanswered about how Grindelwald came to become Graves. Is the real Graves dead or is he stuck in a magical suitcase like Mad Eye Moody in The Goblet of Fire? When did Grindelwald take Graves' place, and what does his infiltration of the MACUSA mean for his plans in Europe?

Fantastic Beasts 2 is set for release in November of 2018, so, hey, it's only two years away!

More like this
Sadly, 'Fantastic Beasts: The Secrets Of Dumbledore' Isn’t Streaming — Yet
By Arya Roshanian
The 'Thor: Love and Thunder' Trailer Finally Shows Christian Bale As Villain Gorr
By Grace Wehniainen
The 'Hocus Pocus' Sequel Finally Has A Release Date & It Makes Total Sense
By Shannon Barbour and Radhika Menon
What Does Doctor Strange’s Third Eye Mean?
By Arya Roshanian
Get Even More From Bustle — Sign Up For The Newsletter