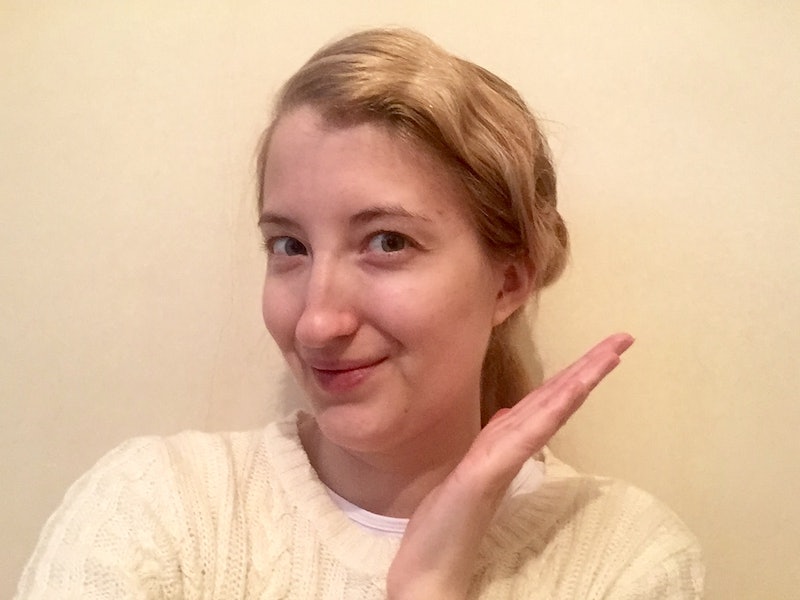 Sometimes the fashion and beauty world can rehash old trends trends, the kind that make you want to transport yourself back in time and live amongst people who loved doing glam things with their appearances. That's exactly why I tried finger waves to see how easy this look was to achieve without professional help, and if it's a trend you can wear in everyday life — despite the fact that it's 2016 and not 1920.

Although some people might be hesitant about the throwback finger waves hairstyle, I personally love it. IMO, finger waves look utterly chic and have an understated, luxurious aura about them. Of course, this hairstyle is reminiscent of the '20s and might bring to mind elegant characters in popular culture, such as Lady Edith from Downton Abbey . However, this glamorous look may seem as if it belongs at an opulent party thrown by The Great Gatsby, rather than sported at your desk while eating a sandwich on your lunch break.

But, the fashion gods have spoken and the message is: Finger waves are in. According to Vogue, finger waves were a "surprise trend," this season that, "...popped up in all four fashion cities and in varying guises — from lacquered curls to gently undulating fringes." My favorite finger waves were the ones created by Eugene Souleiman for the Stella McCartney autumn/winter 2016 RTW show.

So I tried to recreate finger waves IRL, to see how wearable this hairstyle was amid the norm of everyday life.

Models walking the Stella McCartney fall/winter 2016 show were spotted with subtle finger waves on one side, with the rest of the hair pulled back. The models with long locks had their hair tied back in a neat ponytail, so that all the attention was on the waves at the front of the face. IMO, this take on the finger waves trend is the best to wear in everyday life because it is chic and subtle, plus it would keep my hair out off my face.

After watching a few different tutorials on how to create finger waves, I settled on my own method that I believed would work with my naturally straight, thick, long hair, that would also utilize the hair tools and products I had at home.

To start, I separated the top layer of my hair that falls around my face and put the rest in a low ponytail. I used my heated rollers to create curls — I don't have a curling iron, plus I know my rollers work well with my strands. I kept these in for a good half an hour.

Next, I removed my rollers to reveal tight, corkscrew curls.

I brushed the curls with a paddle brush to make them more voluminous.

After this, I gave myself a deep side part and, in doing so, I swept the majority of my curls to the left.

Then the fun started! As I wasn't going for the "wet look" finger waves, I did not apply any gel. I went straight in with bobby pins to begin forming my waves. I would have used flat clips if I had them, so if you're recreating this look at home, I'd highly recommend using flat clips, as they're much easier to use.

I methodically formed a wave, used my finger to hold it, and secured it in place with a bobby pin, until I'd finished.

I secured the rest of my hair into a low ponytail, added a couple more grips for extra security, and sprayed a ton of hairspray on my bonce. Here you can see it drying.

After about 10 minutes, I carefully removed my bobby pins. Although my finger waves weren't quite as structured as some I'd come across (especially the authentic, vintage ones) I was still happy with the way they turned out.

I am certainly no pro when it comes to hair, but I was quite proud of my efforts. Although, I would have liked my waves to have been placed a little further down, perhaps resting on my face more. I'd been super scared that they weren't going to set, so I'd gotten a bit too trigger happy when it came to the amount of grips I'd used — which, I believe were to blame for my waves being placed further back than I'd wanted.

I must admit, I was feeling beyond chic sporting my finger waves while working. I even felt awesome undertaking tasks I usually find monotonous, such as sending emails, with my finger waves. I almost felt like a new woman: The preened and polished upgrade of me. TBH, when I wear vintage hairstyles when performing with my vintage girl band — usually victory rolls — I always feel perfectly put together and more professional than usual. I think there's a lot to be said for how a neat hairstyle can make you feel.

By the time I'd finished working, it was already ridiculously dark — that's the great British winter for you — so I wrapped up warm. I liked how, with my hair tucked in my coat, it looked like I had a bob like a real flapper from the '20s!

My first stop was to post a letter and I felt quite professional looking. However, I was beginning to feel increasingly androgynous in the dark, with my ponytail covered, which, as a feminine presenting gal, made me feel a bit out of sorts and unlike myself. It was also bitterly cold and having all of my hair swept back was not doing my ears and neck any favors.

I popped into a local coffee shop to escape the cold after running my errand and snapped a secretive selfie, when I thought no one was looking. Sadly, as you can see, I think the wind had slightly lessened the effect of my waves, as they weren't as rigid as before.

All that being said, I really loved wearing finger waves IRL. Of course, it's also a fabulous style to wear to a holiday party or a special event, but I felt it added a certain je ne sais quoi to my everyday appearance. Wearing finger waves in the midst of a normal work day made me feel polished, professional, and ready for whatever the day threw at me. I can imagine this would be a great look to wear at the office (I work from home), especially to a meeting or when having lunch with a client. This would also be a great style for moms as it gives the wearer a subtly elegant vibe, with moderate effort, plus it keeps your hair up and away from the grasp of little hands.

I'd recommend anyone who fancies flaunting a vintage vibe in everyday life give the finger waves trend a try! Daisy Buchanan, eat your heart out.