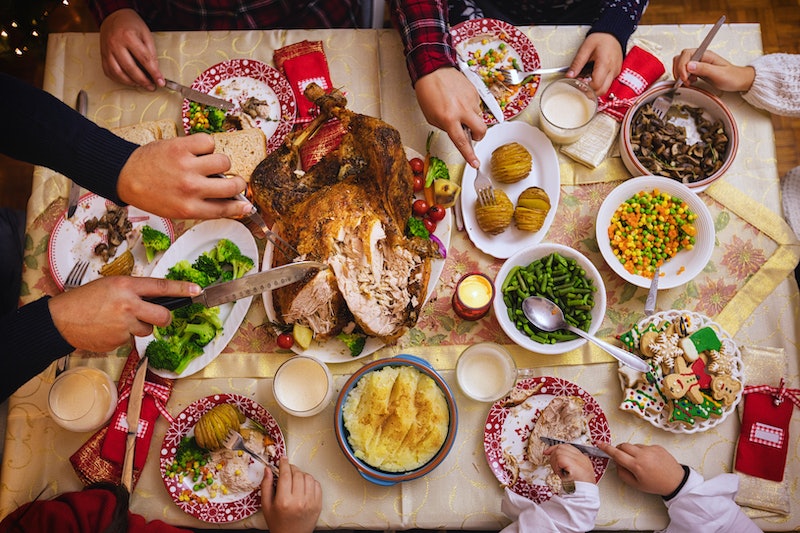 Oh, Thanksgiving: Only the most wonderful holiday of the year, am I right? Lots of family time, lots of revisiting your childhood home, and of course, lots of food. In between all of the mashed potatoes and awkward talk about politics, though, it's also fun to think about myths about Thanksgiving and whether or not we can debunk them. Sure, we pretty much all learned about the (so-called) history of Thanksgiving in elementary school — but like most things we learn when we are young, we missed out on a lot of the complexity and nuance at the time.

We also got the light version of the facts and that can lead to misconceptions and misinformation. For example, while we might have an image of pilgrims sitting down to a decorated table full of food while wearing black and white outfits with buckles on their hats and shoes, that's not quite accurate. In fact, according to History.com, buckles didn't come into fashion until later in the 17th century, and people actually wore a variety of earthy colors. Mind-blowing, right? All of those cartoons you colored about pilgrims in those funny buckled hats were far from the truth.

Check out some other common Thanksgiving myths, now debunked, below:

The First Thanksgiving Was In 1621 And Celebrated Every Year After

While it is true that what we think of as the first Thanksgiving did take place in 1621, it didn't automatically become an annually celebrated event; it was a secular harvest feast more than anything else, meant to be a one-time deal. What's more, Thanksgiving didn't become a federal holiday until 1863.

The Original Thanksgiving Took Place On The Fourth Thursday of November

Personally, I always thought this one was true, but alas, it isn't. According to History.com, the original "Thanksgiving" feast in 1621 occurred somewhere between the dates of September 21 and November 11. And — joy of joys — it was actually three days long! Which, if you ask me, is fine for us to return to. The rationale behind this timeframe was so they could center the feast around the English harvest festivals, which typically occurred at the end of September. It wasn't until the American Revolution that Congress suggested the specific date for Thanksgiving we recognize today.

Thanksgiving Is A Religious Holiday

While many holidays do have roots in religion, Thanksgiving actually isn't one of them. While History News Network notes that the pilgrims were a very religious people, History.com also explains that a thanksgiving (lowercase T) was actually a churchgoing holiday meant for thanking God for a particular piece of good fortune, like winning a battle. Indeed, as History.com explains, "the types of recreational activities that the pilgrims and Wampanoag Indians participated in during the 1621 harvest feast — dancing, singing secular songs, playing games — wouldn’t have been allowed" at what the pilgrims thought of as a thanksgiving observance. The harvest festival we think of as Thanksgiving (capital T) was secular in nature.

We've Been Eating Turkey At Thanksgiving Since The Very First One

Turkey is often the center piece for a typical Thanksgiving dinner, even if you're opting for a meat-free version. Interestingly, though, although people did eat turkey at the time, no one actually brought turkey to Thanksgiving. As Robert Krulwich explains at NPR, the Wampanoag guests brought deer and venison with them, and the English likely brought fowl of some sort — but not a turkey.

Thanksgiving Was Held Around A Big Dining Room Table

No matter what food you prepare, or even if you go out to a restaurant for dinner, we pretty much all celebrate Thanksgiving by sitting around a table, often with some decorative gourds accompanying it all. Robert Krulwich says, however, this would have been far from the norm during the first Thanksgiving celebration. In fact, Thanksgiving was likely held outside because the houses were too tiny to fit everybody inside for a meal.

Ah, the Thanksgiving dinner sides. They are precious, delightful bites of joy, no matter what your dietary tastes. And the desserts! These foods have charmed American tastebuds for years, so they've got to be authentic to the original Thanksgiving dinner menu, right? According to Krulwich, not quite. It's likely that people did eat pumpkin, but certainly not in the form of a pie; what's more, cranberries would have been eaten dried, not sauced. Instead, a typical menu would have included easy to gather local foods, like lobsters, clams, cod, eel, turnips, spinach, chard, roots, beans, and of course, various meats.

I know, I know. This is a lot to take in. Process it now, so you have time to bring it up when your great uncle makes a cringeworthy comment about the election at the start of Thanksgiving dinner. Happy holidays, all!