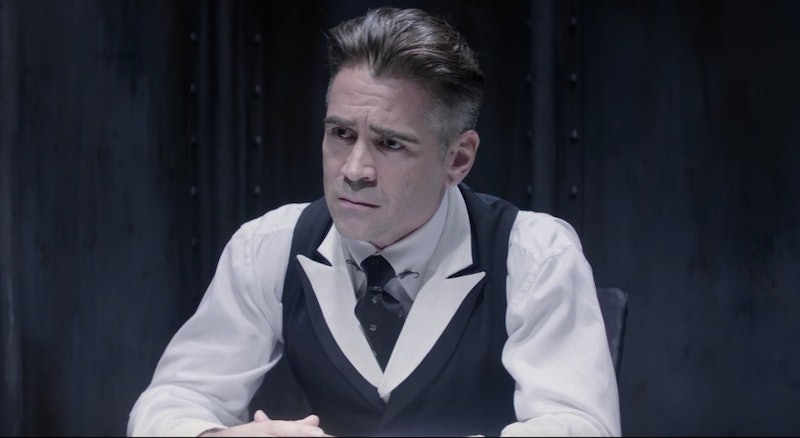 Percival Graves — with a name like that, you better be either a super awesome wizard or serial killer. Lucky for fans, in the case of Fantastic Beasts and Where to Find Them, we're looking at the former. Graves, played by Colin Farrell, is introduced early on in the film as a powerful auror working for the MACUSA (Magical Congress of the USA). But, trailers for the film portray him as threatening and ominous. Plus, Farrell has that bad boy vibe that doesn't really scream "innocent civil servant." Looking at him, it's truly hard to tell if Colin Farrell as Graves is good or bad in Fantastic Beasts.

Spoilers ahead. As an auror, Graves is famous for protecting both wizards and No-Majs. When there's something strange in your neighborhood, he's going to show up and fix whatever magical disaster has come your way. And yet, there's something not quite right about Graves. In the trailers, he can be heard saying such suspicious things as, "We have lived in the shadows for too long," and, "I refuse to bow down any longer." He sounds more like a Death Eater than an auror, suggesting that wizards should rule over their human companions instead of hide from them.

In fact, over the course of Fantastic Beasts, it is revealed that Graves is not a fan of how wizards are being kept in the shadows. On his downtime, he has recruited Credence, a No-Maj and Second Salemer, to help him find a young, powerful witch or wizard that holds the key to taking them out of the shadows. Later, he accuses Newt of trying to start a war between wizards and No-Majs by releasing magical creatures, which reveals his own personal plans to use the powerful young witch or wizard to announce to the world that magic exists. So, though Graves has done good work as an auror, he's clearly got some problems.

Graves is definitely not good in Fantastic Beasts , but he doesn't really take a turn towards evil until midway through the film, when he jumps at the chance to sentence both Newt and Tina to death without any kind of trial or second opinion. And, even then, he doesn't totally arrive at evil until it's clear that he's manipulating Credence, wants to harm wizards and No-Majs alike, and then is revealed to be Grindelwald in disguise.

So, no, Graves isn't a good guy. He's not even a nice guy. Hell, he's not even Graves! That said, it's unclear what actually happened to the real Graves, who, as an established auror, one would assume was actually good. He could be dead, or he could be stuck in a trunk somewhere like Mad Eye Moody in Harry Potter and the Goblet of Fire. Fantastic Beasts doesn't reveal what Grindelwald did with Graves before he took over his life, or how long Grindelwald has been masquerading as Graves to begin with.

The real Graves could be a perfectly great man, so here's hoping we get to meet him and decide for ourselves.

More like this
'Bridgerton' Star Nicola Coughlan Confirms Season 3 Will Focus On Colin & Penelope
By Grace Wehniainen and Alyssa Lapid
The 'Hocus Pocus' Sequel Finally Has A Release Date & It Makes Total Sense
By Shannon Barbour and Radhika Menon
What Does Doctor Strange’s Third Eye Mean?
By Arya Roshanian
Elizabeth Olsen's Chris Evans Friendship Update Was Accidentally Hilarious
By Grace Wehniainen
Get Even More From Bustle — Sign Up For The Newsletter