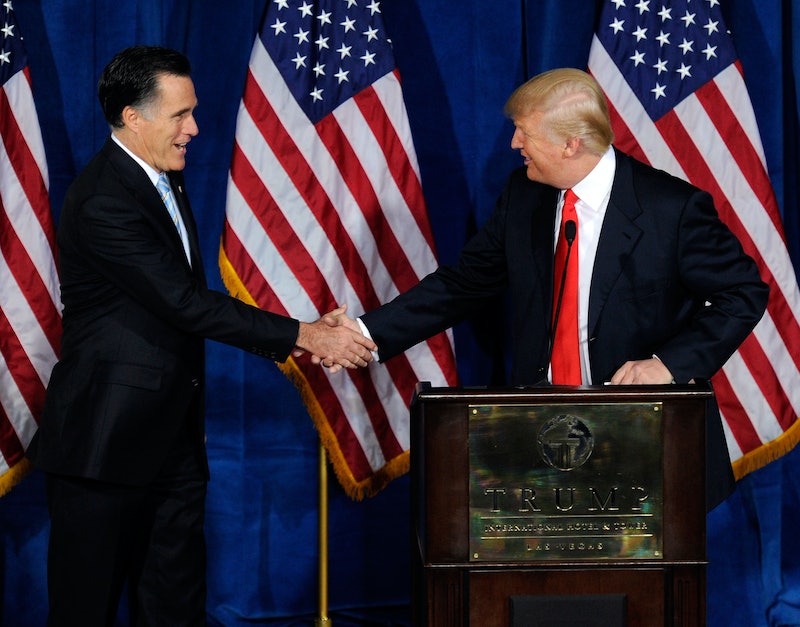 Mitt Romney and Donald Trump have never been each other's biggest fans, but, as CNN reports, the two will be meeting this weekend to discuss a possible cabinet position. Back in July, Romney said that he could see Trump winning the presidential election. However, throughout the campaign season, Romney repeatedly criticized and denounced the now president-elect, saying that "his is not the temperament of a stable, thoughtful leader" in a March speech at the University of Utah in Salt Lake City. Trump, too, has had his fair share of harsh words for Romney. Their relationship, though, seems to have taken a turn for the better. On Nov. 9, after Trump won the election, Romney struck a more supportive tone in a tweet wishing "our duly elected president" well.

Though Trump and Romney share the same political party, the two have many points of contention. For one, Romney told CNN's Wolf Blitzer in June that Trump's presidency would only legitimize racism and misogyny in America. Meanwhile, one of Trump's first acts as president-elect was hiring his famously misogynistic and racist campaign CEO Steve Bannon on as his chief strategist and senior counselor. If you think Romney and Trump's first post-election meeting will be awkward, no telling how the Romney-Bannon meeting might go.

Even if a Trump cabinet position is in the cards for Romney, which role would he take? Chief of staff is already taken by Reince Priebus, though Romney was not rumored to be in the running for that post anyway. In fact, from the New York Times to the Washington Post to Politico to BuzzFeed News, the former Massachusetts governor was not included on any major shortlists for Trump's potential candidate before Thursday.

That the two are meeting at all comes as much of a surprise, and only after news of their meeting was released did NBC report that Romney may be called upon to serve as secretary of state. If so, Romney's rumored competitors include former New York Mayor Rudy Giuliani, former U.S. Army General and CIA Director David Petraeus, and South Carolina Gov. Nikki Haley. Newt Gingrich, who was rumored to be Trump's pick for the job, reportedly told reporters at McClatchy DC that he won't be a member of the upcoming cabinet.

Trump spokesman Jason Miller and senior adviser Kellyanne Conway both refuse to hint at when the appointments will be set, but if Trump's tweets can be trusted (and they can't), he spent much of Thursday meeting with and considering possible candidates. Nevertheless, with the way speculation on Trump's nominees has changed from day to day over the past week, Romney's chances at this point seem as good as anyone's.