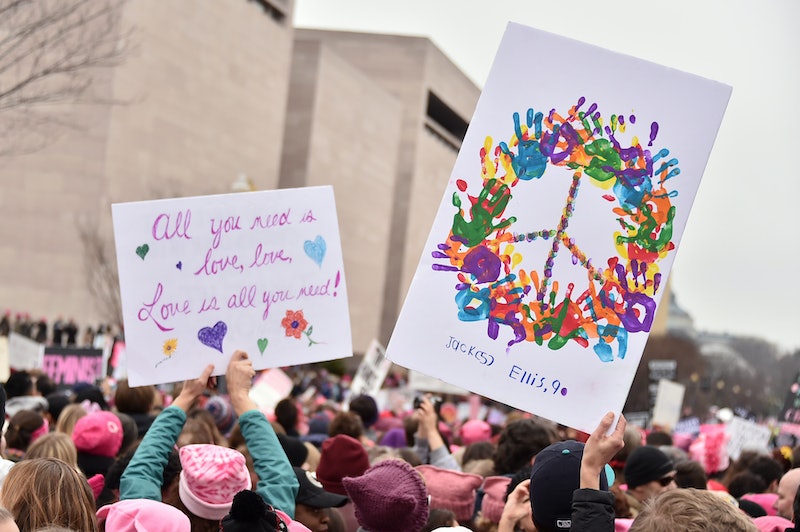 The 2016 election season brought out the worst in some and the best in others — and both in the aftermath of Nov. 8 and now on Inauguration Day, groups of people have gathered in every corner of the nation to protest. But while yelling and shouting may seem effective (and sometimes, they are), don't let anyone tell you that quiet but passionate gatherings don't leave a mark. There are numerous peaceful protests from history that made a difference, and we're still talking about many of them today. In fact, I think that the peaceful protests are largely more effective: There's something uncannily powerful about a group of people fighting for what they believe in — without actually fighting.

It goes back to the comforting saying that has become particularly famous as of late: Love trumps hate. You can't conquer fear with fear. Negativity with negativity. Anger with anger. Love, passion, understanding, forgiveness — these are the traits that drown out all of the bad.

Whether you're going to the Women's March this weekend, participating in any of the other protests happening across the country or the world, or gearing up for the next four years, remember this: If you think that the only way to get through to your "opponents" is to be bigger, louder, meaner, these peaceful protests from history might convince you otherwise.

This was one peaceful protest that came down to the simple act of refusing to ride the city buses of Montgomery, Ala from Dec. 5, 1995, to Dec. 20, 1956. Those who participated did it to protest segregated seating. It's considered the first large-scale protest against segregation that happened in the country. Just four days prior to the boycott beginning, Rosa Parks had been arrested and fined after refusing to give her seat up to a white man. Ultimately, the Supreme Court ordered the city to integrate the bus system. The protest also brought into the spotlight one of the Civil Rights movement's leaders: A gentleman by the name of Martin Luther King, Jr.

Although it makes zero sense, public breastfeeding remains a topic of controversy (because some people just can't handle the idea of boobs, apparently). But Brooke Ryan is helping change that. In 2007, she was sitting in the back booth of a restaurant breastfeeding her seven-month-old when a manager allegedly asked her to cover up — a violation of the law. (It's Not long after, women in 30 states held "nurse-ins," breastfeeding in plain sight. It worked. The restaurant released a statement saying, "This situation has provided an opportunity for us to work with our associates to ensure we’re making nursing mothers feel welcome. ... We will also accommodate other guests who would be more comfortable moving to another area of the restaurant."

In 1978, the deforestation of the Pureora forest in New Zealand had finally upset one too many people. To protest the deforestation, they went into the forest, built tree houses, and refused to leave them. The deforestation couldn't continue with people amongst the trees. But was it successful long term? It sure was. The government permanently stopped all logging operations, and the area was turned into a park. The Pureora tree sitters also inspired other similar events against deforestation.

Lawyer Inez Milholland Boissevain led more than 5,000 people down Pennsylvania Avenue in Washington, D.C. on March 3, 1913. This became one of the most monumental events in granting the right for women to vote, and the National American Woman Suffrage Association raised more than $14,000 to fund it. While a woman's right to vote wasn't granted until seven years later with the passing of the 19th amendment, this peaceful parade is still considered pivotal in the final decision.

It was on Aug. 28. 1963 when more than 200,000 people gathered around the Lincoln Memorial in Washington, D.C. They were there to protest segregation and demand equal rights for all. Martin Luther King, Jr. made his infamous "I have a dream" speech, and the peaceful protest, in large part, sparked a change in the nation, passionately reminding us that all people are created equal — full stop.

British rule previously said that Indians couldn't collect or sell salt — but that all changed in 1930, when Mahatma Gandhi rounded up a group of supporters to march 240 miles from his ashram to the Arabian Sea. The group grew bigger than they ever imagined. They collected salt from the ocean, and more than 60,000 people were arrested. They continued the protest until Gandhi was given bargaining rights during a negotiation in London. India didn't see freedom for another 17 years, but it helped make Gandhi a leader, as well as an inspiration for future peaceful protesters like MLK.

Estonia wanted to get out from under the rule of the Soviet Union, so they sang their way out. In 1988, 100,000 people came together for five nights, using singing and music to celebrate their culture and further establish their solidarity and independence. They had been under Soviet rule for decades; but in 1991, they regained their independence.