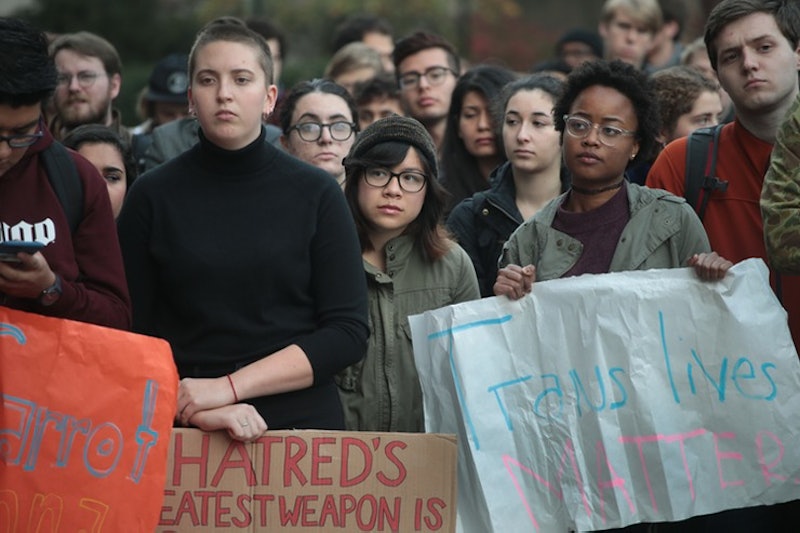 For some of us, there can be a pretty fundamental disconnect between our activist souls (this is unacceptable! I must do something!) and our socially anxious psychologies, which make us deeply afraid of talking to strangers or having unexpected social encounters. This is a conflict that's particularly pertinent at the moment, with protests erupting all over the United States and more planned for the future. People who aren't equipped, for whatever reason, to do the "traditional" modes of protesting — marching with placards, linking arms with strangers, cold-calling politicians, door-knocking for support — can feel inadequate and shamed. They want to help, but for good, solid psychological reasons, they're not equipped to go about it in the most visible ways. If you deal with social anxiety, can you still help out the protest movement?

The good news is that there are many ways to contribute to a protest movement that don't involve grabbing a placard and walking through the streets. There are more effective and less effective ways of getting your point across while protesting, but a heavy dose of social anxiety doesn't have to prevent you from getting things done or making a difference.

In fact, you should distance yourself from anybody who makes you feel as if you're a bad activist, or lazy, or not trying hard enough if your social anxiety makes it difficult for you to protest in traditional ways. You can still make a difference — from sharing skills to offering and obtaining support, the world of protest has lots of space for everybody, and that includes people who use the self-service checkout even when there are four people behind the registers.

Can't bring yourself to call your congressional representative, even though the information available to us suggests that it's the most effective way of reaching them and is more influential than writing or emailing? Form a partnership with somebody who can. Match skills. Write or discuss what you'd like to say, and tell them to inform the staffer on the other end of the line that they're calling on your behalf. Discuss what questions might come up over the course of their conversation with the staffer on the other end of the phone, and what points you'd like to get across. Using somebody else as your voice is a legitimate way of being part of the process without making yourself freak out. Hell, amplify your voice by having multiple people call and give your opinion.

If you don't know anybody in your immediate circle who would be willing to do this for you, reach out elsewhere in safe spaces: the Pantsuit Nation Facebook group of Hillary supporters, for instance, or the newly formed #NotMyPresident alliance of anti-Trump protest groups. In the wake of this election, there's been an upsurge of kindness, collaboration and energy; you'll likely be able to find somebody who'll be your voice.

Lucky enough to form a collaboration with somebody close to you? Focus on what you can give them as well as what they can do for you. They can use their magical Extroversion Powers to be vocal and shout; you might be able to spend time writing speeches for them, or doing research, or planning. Bring your skills together. Be the Captain Planet of protesting.

Add Your Name To Petitions

A lot of the focus at the moment has been on extrovert-friendly protesting, from joining marches to picking up the phone; but there are other, quieter versions of protest that can also be effective, if done in the right ways. As Kelli Bamforth explained over at Romper, petitions targeted at specific issues (like Steve Bannon's appointment) can be influential if they gain enough momentum.

Petitions done via the We The People engine at the White House require a response from the government if they gain over 100,000 signatures in 30 days. (In the UK, by the way, anything over 10,000 signatures on official government petitions will get a response, and selected ones will be debated in Parliament.) We The People maintains constant feedback on the government's response to petitions, directly and indirectly; a petition on the Dakota Access pipeline, for example, has links to the latest developments and announcements on the progress of the pipeline and its legality. Use petition engines that are directly linked to the government or otherwise reputable with a reputation for creating change, like Change.org.

Give Creative Support That Isn't Vocal

Skills beyond the vocal are very useful in protesting scenarios, and you can offer many of them. Come up with slogans and make materials for distribution at rallies and protests, from badges to posters: everybody needs a Love Trumps Hate item in beautiful colors. Do logistical research and arrange carpools for protestors coming from remote areas. Make food for people who are protesting, and give them a place to come and rest if you're nearby.

Media attention is also key; an expert guide from 2009 emphasizes the importance of engaging journalists and publications, including emailing journalists, coming up with strategies to catch media interest, and producing press releases. You could help out on those scores.

And your support can go beyond the protests themselves. Make and publicize art that makes a point; research and gather relevant statistics that those involved in this fight will find useful or illuminating; provide care and help and safe spaces for others; and reward yourself for every step you make outside your comfort zone.

If You Do March, Don't Go Alone

If you do want to march, do not do it alone if possible. Go in a group of people who will be responsive to your needs and let you rest or not engage if required. Don't know those people? Try to find some on FB groups and Twitter.

The act of protesting itself doesn't have to be particularly socially challenging, because you're not having a conversation with anybody specific: you're part of a large mass who are encouraging you to shout interesting things or just to walk along in solidarity. If you feel like being silent, gravitate towards people who are yelling and nod along vigorously. However, if large groups of people make you upset, claustrophobic, and anxious, be aware that this may not be the best route for you; always know where you are, be able to get home or to a safe place if you can, and note your own feelings and limits about how you're going at all times.

This isn't exactly an isolated problem. There are many people in your position right now: wanting to do something, but hating the idea of picking up the phone or getting out of the house and subjecting themselves to some of their worst anxieties. This can prove an asset to you. Anxiety protest groups are popping up worldwide; one was publicized in London in July, for instance. They may not meet in physical spaces, but they'll be full of people who are experiencing the same issues and want to work with them and contribute at the same time. These groups can be a very good idea for sharing tactics, experiencing support, and asking for advice; be open about what you experience, and you'll likely find that others are going through it too.

Recognize That Your Contribution Is Still Valid

In a prescient article in 2015, Everyday Feminism noted at length that there are many reasons why extroversion and leading protest marches aren't the only valid means of protest. Marching and protests, writer Michal Jones noted, are "one of many possible contributions – one of many ways to involve ourselves – but often the one we consider 'true activism.'" And that's a distinction you may well have internalized, without realizing it. Taking care of oneself and one's needs is a critical part of resistance, and anything that shames you into neglecting it is not an appropriate use of your time. If anything, the diversity of voices within any movement is what gives it strength; your ability to bring something different to the table is part of your value, not a detraction of it.

More like this
25 Inspiring Quotes From Black Women To Celebrate Black History Month
By Kyli Rodriguez-Cayro and JR Thorpe
These Are The Fastest Electric Kettles You Can Buy
By Margeaux Baulch Klein
24 History-Making Black Women You Probably Didn't Learn About In School
By Ayana Lage and JR Thorpe
15 Black-Owned Liquor & Wine Brands To Add To Your Bar Cart
By Alexis Morillo
Get Even More From Bustle — Sign Up For The Newsletter
From hair trends to relationship advice, our daily newsletter has everything you need to sound like a person who’s on TikTok, even if you aren’t.