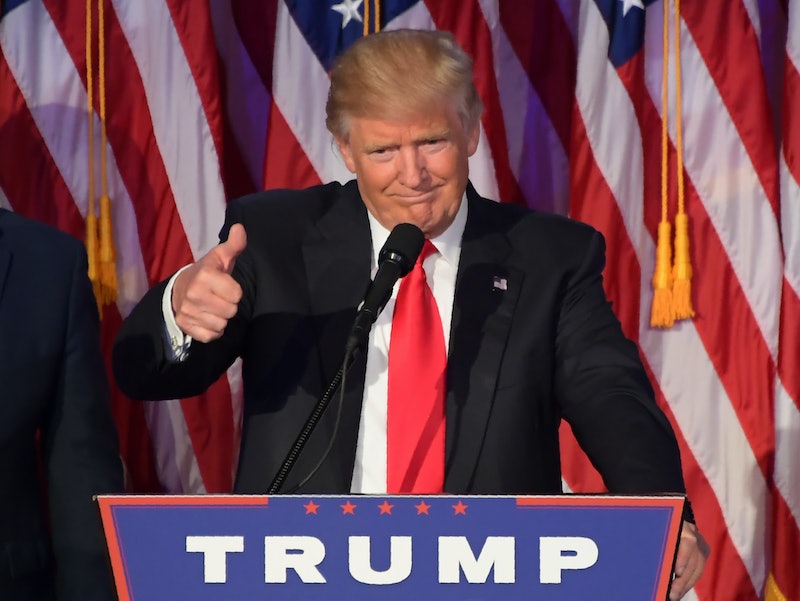 Remember those moments in the final hour of the election, when you realized Donald Trump truly was going to become the next president and all you wanted to do was actually, legitimately take off and run for the hills? Well, Gen Z has taken matter into their own hands with the "Trump's coming" challenge videos that have started trending on Twitter. To explain the meme, it's kind of like the opposite of the viral Mannequin Challenge, which involved large masses of people freezing in dramatic poses while Rae Sremmurd's "Black Beatles" played in the background. Except this time, there is no music — just a person holding a camera, who screams, "Trump's coming!" At which point everyone hits the deck and runs like their lives depend on it, because ... well, a lot of people's lives actually do .

The implications of Trump's presidency aside, the dark humor of this is especially poignant because, for the most part, the people participating in this challenge weren't of legal voting age; they're running from a man they decidedly did not put in the Oval Office. So while these videos do provide some comic relief by giving a voice to the collective brain-screams of anyone who didn't vote for Trump, it is a reminder of yet another group of humans who will be affected by this presidency who weren't given an opportunity to stop it.

At the very least, though, I'm feeling pretty great about what will happen when the teens in inherit the earth, because these are all pretty damn funny. Here are some worth your view:

One Where The Camera Guy Commits MAYBE Too Hard

The Most Exercise Anyone Ever Got In P.E.

When Not Everyone Is In On The Joke

Even Teachers Are Joining In

I'm looking forward to this getting as massively viral as the Mannequin Challenge did — but in the meantime, keep your ears peeled, and make sure you're wearing sneakers for the next few months. If you hear someone make the call, you're gonna want to be ready to run, y'all.