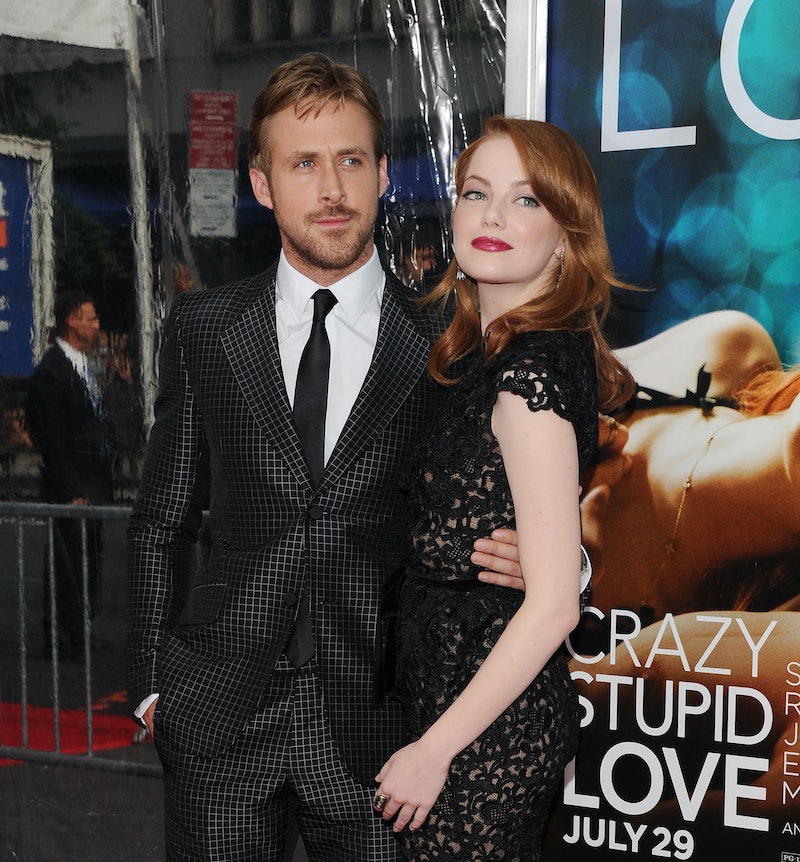 She played a whip-smart law student who melted his icy playboy heart in 2011's Crazy, Stupid, Love; then he played a '40s LAPD sergeant who fell for her seductive gun moll in 2013's Gangster Squad — and now, it seems that Ryan Gosling and Emma Stone are in talks to reunite for their third collaboration. In Damien Chazelle's La La Land , the duo would play a pair of "dreamers," according to Vanity Fair: Stone would take on the role of "aspiring actress Mia, who's lonely and desperate to fit in," and Gosling would nab the role of "cocky yet charismatic jazz pianist Sebastian." Even better, the film will be helmed by Chazelle, the 30-year-old up-and-coming director behind last year's surprise hit Whiplash.

Miles Teller was originally set to re-team with his Whiplash director in the role of Sebastian, with Emma Watson co-starring as Mia; but Teller departed the project for unknown reasons (presumably to film The Fantastic Five or Divergent Three-And-A-Half or something), and then Emma Watson left to star in Disney's live-action remake of Beauty And The Beast . While this was devastating news at the time, the blow has been greatly softened by the news that Gosling and Stone may be stepping in to fill the vacant roles.

If it's not yet incredibly obvious why this news is so exciting, here are seven reasons why La La Land should now be on the top of your must-see list:

1. It Stars Ryan Gosling. And Emma Stone. Together.

Just in case you missed that part the first couple of times I mentioned it.

Alone, Gosling and Stone are two of Hollywood's most talented, most attractive, most lovable young stars. Together, they make movie magic. If you need a reminder of what a dynamic onscreen duo these two make, re-watch the infamous Dirty Dancing scene from Crazy, Stupid, Love. (Yes, I said re-watch. I know you've already seen it at least a dozen times, don't lie to me.)

Which means we should get more electric interactions between the two stars like the pillow talk scene in Crazy, Stupid, Love or the meet-cute from Gangster Squad (as seen above). At the risk of ruffling a few feathers, it's my humble opinion that Emma Stone and Ryan Gosling have even more onscreen chemistry than Emma Stone and Andrew Garfield. (It's okay to admit that now that Stone and Garfield are officially "on a break," right?)

3. It's A Musical Romance

As if the prospect of Gosling and Stone wooing and flirting for two hours isn't enough to get your butt in a movie theater seat, there's also the fact that they'll be singing while doing it. (Who knows, maybe even literally while they're doing it.) Hopefully that means at least one scene of Gosling using his killer dance moves, which you can witness in this adorable video of pre-Mickey Mouse Club Gosling rockin' it out to Cathy Dennis's not-at-all-age-appropriate "Touch Me (All Night Long)."

4. It's Directed By Damien Chazelle

The budding filmmaker wow'ed audiences at Sundance last year with his feature film debut Whiplash, and rode that wave of critical acclaim and popular support all the way to the Oscars, where the film was nominated for five awards including Best Picture. Even better, it managed to win three of them — the only movie of the year to take home more than a single trophy other than the night's two big winners, Birdman and The Grand Budapest Hotel.

Chazelle's "Director's Statement," which he released to The Wrap, details his vision for La La Land :

I’d like to make a musical about the way L.A.’s peculiar rhythms can push its residents to the edge of their emotions–be they hope, desperation or love. Think the kind of teetering-toward-madness you see in The Graduate or Boogie Nights, and imagine if you were to push that further. In this case, the city pushes its residents all the way: it pushes them into song.

5. It'll Have An Amazing Soundtrack

Judging by the fact that Sebastian is described as a "jazz pianist," La La Land will once again allow Chazelle to indulge in his obsession with the syncopated rhythms of that music. The soundtrack was one of the best parts of Whiplash, and it has been a long time since anyone made the onscreen depiction of music so exciting and visceral as Chazelle did in that film. (See above for proof.)

At its core, this is a movie about artists in love – and what it means to be an artist in love in arguably the most competitive city on the planet. How do you juggle the need to find success as an artist with the need to share oneself with another human being?

Two young artists meet in the big city and fall in love while making beautiful music together? Sounds a lot like John Carney's acclaimed 2007 Irish musical Once — or his recent follow-up, 2013's Begin Again — and that could never be a bad thing. Hopefully La La Land will contain at least one track as haunting and moving as Once's Oscar-winning song "Falling Slowly."

7. It Could Make Musicals Sexy Again

Ever since the 2001/2002 double-whammy of Moulin Rouge! and Chicago, it often feels like movie musicals have forgotten how to be sexy. Since then, we've had happy musicals (Hairpsray), sad musicals (Les Misérables), fantasy musicals (Into The Woods), animated musicals (Frozen), remake musicals (Footloose), terrible musicals (Burlesque) — even a Clint Eastwood musical (Jersey Boys)! — but very few truly sexy musicals. Perhaps that's because there's something about characters breaking out into song and dance that feels inherently silly if done poorly. So it will be exciting to see if Chazelle can bring sexy back to the Hollywood movie musical. Given the steamy combination of Gosling and Stone, it almost seems like a foregone conclusion at this point.