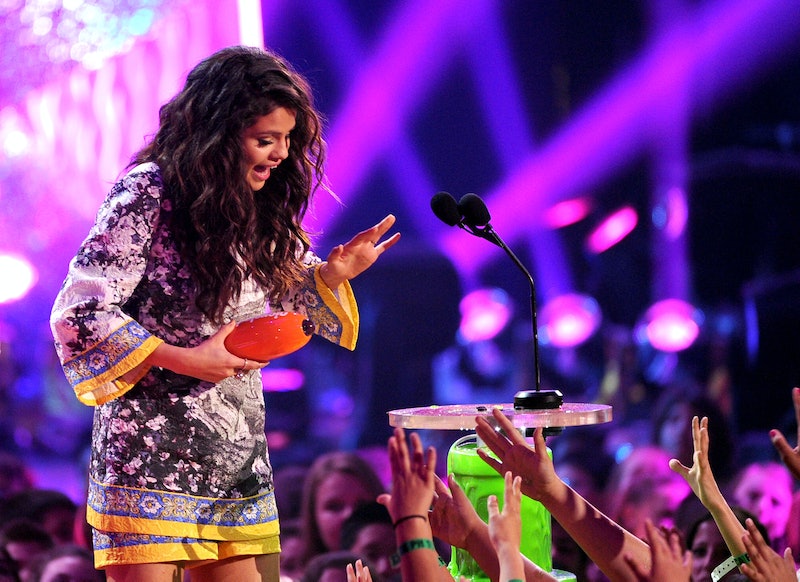 Hardcore Selenator or not, there's a good chance you are rooting for Selena Gomez to move on from Justin Bieber. That's why the most recent gossip about the former (or maybe current?) couple is so hard to hear. Selena Gomez has been wearing a ring on a certain finger suggesting that she might be married/engaged/not-disgusted-by Justin Bieber. She most recently was seen wearing the ring at Saturday's Kids Choice Awards. A source who spoke with Hollywood Life says, "The ring was a gift from Justin, it’s not an engagement ring, but they are back on and very serious." Oh no! Don't do it! He's trouble! Remember your (ex-)friend Taylor Swift, Selena. She thinks he's trouble and she knows trouble when it walks in!

The source goes on to say, "Her family is extremely worried that she’ll do something crazy like elope with him. Selena is totally wrapped back up in Justin, it’s the same pattern happening all over again." If Selena Gomez married Justin Bieber... I mean, how do you even finish that sentence? Twitter would be down for a week? Beliebers would take to the street in protest? I would have to write about a Bieber-Gomez wedding for all of eternity? It's too much to comprehend.

Luckily, there are a few reasons why the engagement or marriage rumors are likely untrue, even if they do happen to be dating again.

Unfortunately there also happens to be one piece of evidence that suggests there could be something fishy going on here.

Ah! Did they think this was a sneaky way to share their love? Did he somehow convince her to get engaged/accept a promise ring/not be disgusted by him and in exchange did she somehow convince him to not talk about it online and not buy a gigantic diamond?

More like this
Selena Gomez Reacts To TikTok Users Who Say She Shaded Hailey Bieber
By Grace Wehniainen
Selena Gomez Joked About Her Relationship Status In Her ‘SNL’ Monologue
By Grace Wehniainen
Camila Cabello Shared Advice For Anxiety & Mental Health With Selena Gomez
By Alyssa Lapid
Is Megan Fox Pregnant? MGK Gave A Shout-Out To Their “Unborn Child” Onstage
By Hugh McIntyre
Get Even More From Bustle — Sign Up For The Newsletter