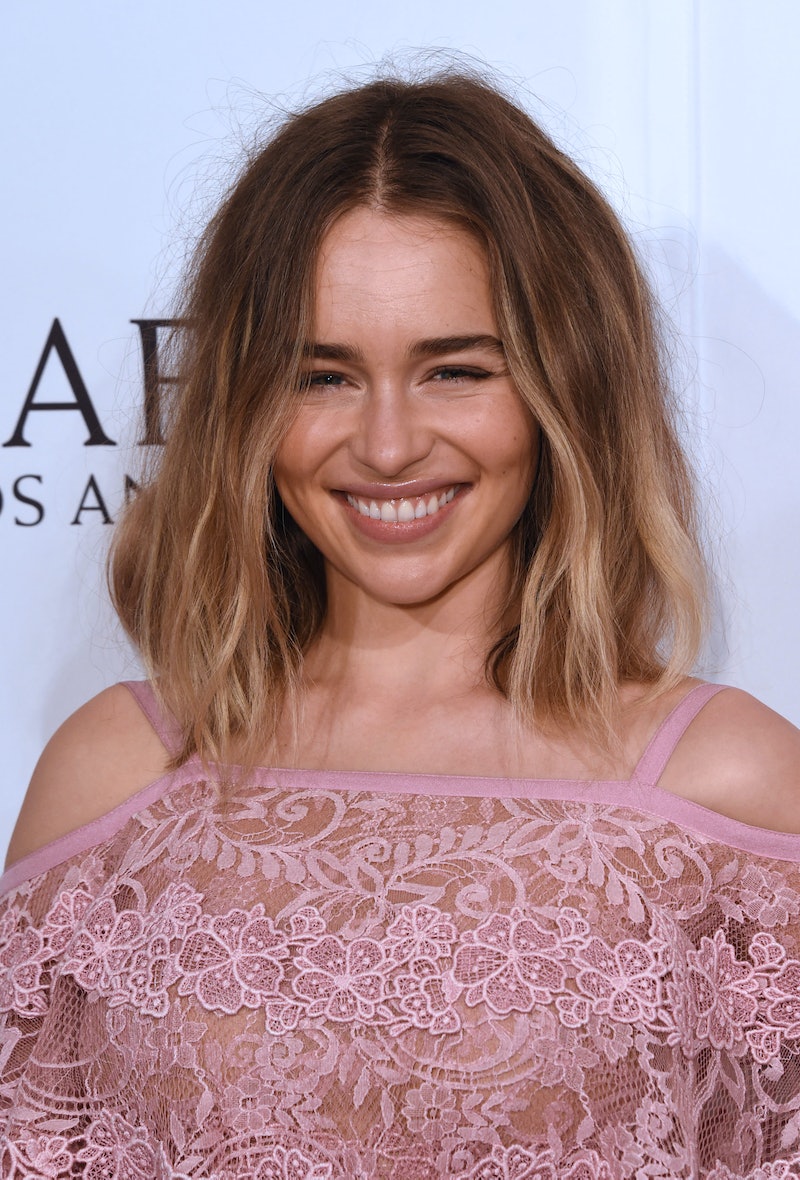 In case you missed the big news, Emilia Clarke is joining the Han Solo standalone film, and she is, without doubt, the perfect addition to this already stellar (or maybe interstellar?) cast. While many of us are aflutter with the unparalleled excitement that comes with such amazing news, there's one important question that still needs answering. Who the heck is Clarke going to play in the film? Surprisingly — or perhaps not, depending on how you see it — the official Star Wars announcement remained mum on her precise role:

Clarke [...] will join the upcoming untitled Han Solo Star Wars movie. Clarke’s role will round out a dynamic cast of characters that Han and Chewie will encounter on their adventures. Clarke joins Alden Ehrenreich and Donald Glover — previously cast as Han Solo and Lando Calrissian, respectively — in the highly-anticipated film, which is set prior to the original Star Wars trilogy.

While tantalizing in itself, the decision to not announce Clarke's exact role actually opens up the floor to a myriad of possibilities. The Hollywood Reporter made mention that Tessa Thompson (Creed), Zoe Kravitz (Divergent), and Naomi Scott (Power Rangers) were all previously in contention for the female lead. It may sound like I'm splitting hairs, but to be honest, that could still be a very real possibility since Clarke's casting announcement omits her actual role. An additional clue in this theory is the Star Wars team's wording: "dynamic cast of characters." That means that Clarke could literally be playing anybody and round out a very diverse cast, like Rogue One — the other Star Wars standalone film. That, my friends, is some exciting news.

There's already some buzz on Twitter that it would be awesome to see Clarke in a non-traditional role, like (amusingly) Chewbacca himself or even the main villain of the piece. Going off the latter suggestion, it would be a great turn in the Star Wars tradition to have a female villain at the center, especially when the Star Wars canon so readily lacks villainous female characters. By and large, Clarke has played heroines (in Game of Thrones) or "good" women (in Me Before You). To see her step into a more shadowy, ominous character would be an unexpected but exciting move.

As with many things in life, only time will tell what Clarke's exact role will be. For now, this is mostly the musings of a diehard Star Wars fan. But really, how can you disagree that watching Clarke go over to the Dark Side would be anything short of brilliant?

More like this
Everything To Know About The Musical 'Joker' Sequel – & Lady Gaga’s Role
By El Hunt and Sam Ramsden
Stephen Graham’s Wife Plays A Vital Role In His Career
By Emma Madden and Sophie McEvoy
Sky’s New Princess Diana Doc Tells Her Story Like It’s Never Been Told Before
By Frances Stewart
The 'PLL: Original Sin' Creators Say A’s Identity Will Be “Very Clear” By The Season Finale
By Alyssa Lapid
Get Even More From Bustle — Sign Up For The Newsletter