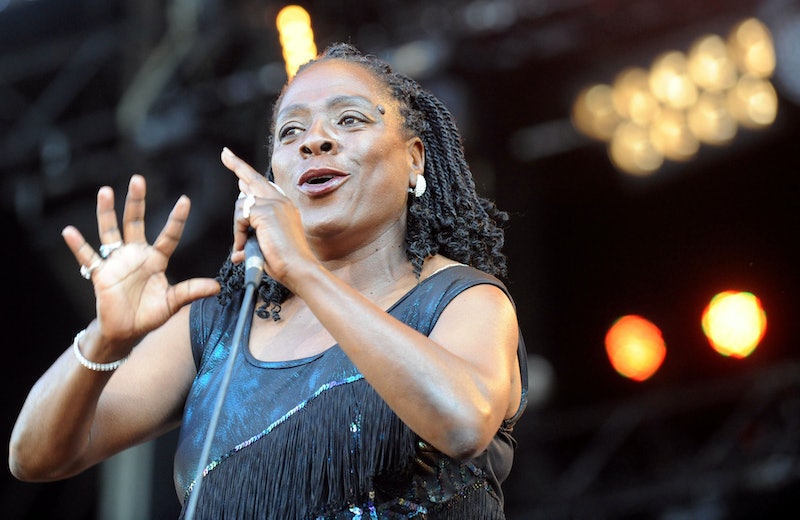 Heartbreaking news in the world of music on Friday evening: Sharon Jones has died at age 60. The soulful singer was best-known for her work with Sharon Jones and the Dap-Kings. In light of this news, you may be wondering: What caused Jones' death? According to a statement on the artist's website, Jones fought a "heroic" battle against a devastating illness — pancreatic cancer. The full statement reads:

We are deeply saddened to announce that Sharon Jones has passed away after a heroic battle against pancreatic cancer. She was surrounded by her loved ones, including the Dap-Kings.

Thank you for your prayers and thoughts during this difficult time.

Instead of asking for flowers, Jones' loved ones are encouraging fans to donate to organizations, such as the Lustgarten Foundation, which funds pancreatic cancer research; the James Brown Family Foundation, which carries on singer James Brown's legacy of giving to those in need; and Little Kids Rock, which supports music education in today's youth.

According to a July 2016 profile in Rolling Stone, Jones was diagnosed with stage two pancreatic cancer in 2013. After having surgery to remove her gall bladder (as well as parts of her pancreas and small intestines) and undergoing chemotherapy, she reportedly went into remission 9 months later. Sadly, the cancer returned in 2015. It also escalated to stage four.

Despite the health scares and struggles, Jones kept moving forward and singing her heart out. She told Rolling Stone in the aforementioned interview,

"When I walk out [onstage], whatever pain is gone. You forget about everything. There is no cancer. There is no sickness. You're just floating, looking in their faces and hearing them scream. That's all that is to me."

Music was her medicine, and she showed just how strong of a fighter she was in her documentary Miss Sharon Jones! — which not only focused on her career, but her battle against cancer. And she didn't let having the disease hold her back. As she told Rolling Stone, "I have this saying: I have cancer; cancer don't have me."

Powerful words from a powerful artist. She will be missed.