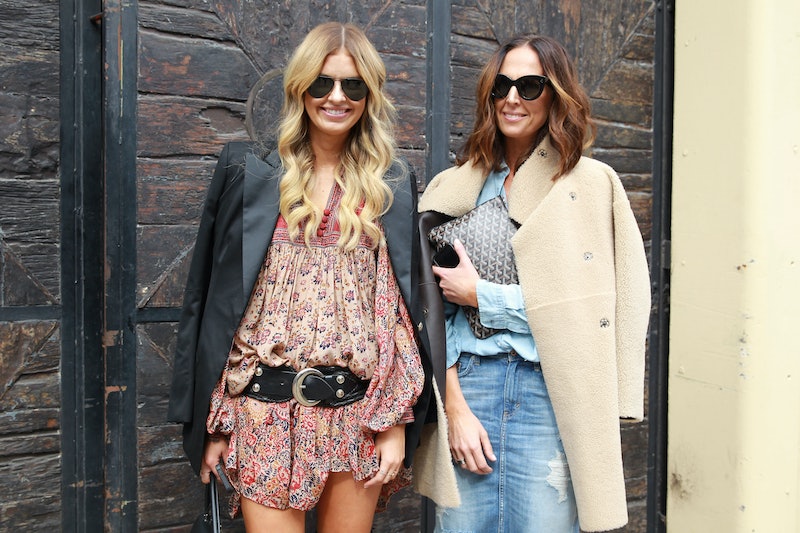 I don't think I'd be lying if I said that most of the Internet is simply fueled by girls taking photos of themselves (that and YouTube videos of cute animals). Truth be told, almost all of us have posted a selfie at one time or another. And no matter how artsy your caption is, let's be honest — we all post photos of ourselves at least partially for that same little buzz of confidence that comes along with receiving positive feedback.

For most style bloggers (and there are a lot of us), posting pictures of ourselves online is something that happens much more frequently than just the occasional "look at my new haircut (and also tell me I'm pretty)" Instagram selfie. And not only that — but we're posting dozens of pictures in outfits we've created; we've made an entire website based on the fact that we think we have good style. Sounds a little narcissistic, right? While most style bloggers would deny any self-obsessed motives, I think that narcissism might play a bigger part in it than we'd like to admit. And that's not necessarily a bad thing.

When people ask me why I started blogging, the truth is that I can't really remember why exactly anymore. Was I envious of all the bloggers I followed who got free things and traveled to amazing locations? I'm sure. Was that dream in the back of my head when I started my itty bitty fashion blog? Absolutely. I think all bloggers start posting because they want a little bit of that attention, but not just from anyone. I wanted to feel like my passion for clothes and fashion could be validated.

Bloggers want to connect with other people who love fashion as much as they do, and feel justified in their love of putting together outfits. When you live or work in a place where fashion isn't exactly celebrated or encouraged, blogging is the best outlet there is to feel confident in your love of fashion, and a great way to become part of a community. Through blogging, I've made friends near and far who love fashion as much as I do. And while we may not all have the same taste, there's still a connection there. Being around people who can appreciate and relate to how much fun you have getting dressed in the morning — that's a great thing.

Bekah McDuffie has been posting on her personal style blog for three and a half years now, and explained how being a teacher encouraged her to start a blog.

"As a teacher I was always on point with my outfits, but in the most unappreciated setting. I think I wanted to share with readers because of my environment being so boring and full of khakis," she says.

McDuffie talked about how she reached out to other bloggers when she first began her own blog, and how she connected with them from there.

"From one comment, to many emails, then to text messages, I was able to build relationships with these girls. Blogging is very much a discussion. I post, I get feedback, I seek advice, all of it! I formed fast friendships with fellow bloggers whose style I appreciated and envied. I would seek their advice in a store dressing room, just as I would a long time IRL friend," she says.

As a college student in a sea of sorority T-shirts and gym clothes, I find that I post photos of myself in outfits because instead of getting asked, "Why are you, like, so dressed up?" as I do so often on campus, I actually get a positive response from people who like clothes just as much as I do. My readers are friends, family, and everything in between — but the blog has given me the platform and confidence to say, "Hey, I love this, and I think I'm pretty good at it." And people seem to respond to it. Maybe it's confidence, maybe it's a little bit of narcissism, but either way, I've found that it's helped me feel even better about my passion for clothes.

So, yes, maybe fashion bloggers post so many photos of themselves for the same basic reason a narcissistic person would do the same. But at the end of the day, blogging usually begins more from the desire for attention from a community, the effort to build confidence, and the desire to feel validated than it is about letting the world know how awesome we are.

While some would think that people start blogging because they are especially self-confident (or even self-obsessed), it's often the opposite. Of course, there are bloggers who are overly confident about what they do — but I think that's more the exception than the rule.

Dani Shapiro has been posting photos of her personal style on her blog, The Daily Dani, since 2011 and says that she finds that bloggers often have low self-esteem, rather than the opposite.

Even fashion bloggers who are particularly confident about what they are posting are almost always unsure about posting on social media. We're self-conscious about the idea that people outside of the blogging community might see it as self-absorbed or, of course, narcissistic hobby.

So is there really any merit behind the idea that all bloggers are narcissistic? Maybe a little. But it's the same narcissism that leads people to post something on Twitter, Instagram, or Facebook. Blogging is a form of self-expression, and an opportunity to present ourselves to the world in our best way possible. Some might define that as narcissism, but being able to showcase what we love, what we are confident about, and our talents is something that everyone should have the opportunity to do, right?

Sarah Barnett, blogger at Think Twice Style, summed up the idea of blogging and self-expression when she compared fashion blogging to any other form of art.

"Artists put their self-expression onto canvas, so why is it different for putting together wearable art? Frida Kahlo could be seen as a narcissist because of her overwhelming number of self-portraits, but does that mean she actually was one?" Barnett says.

It's a simple argument, and maybe one you've heard before — but it holds true.

No, I am not the next Frida Kahlo. Nor do I consider myself the most fashionable person in the world, but fashion blogging, for me, began as an outlet to feel justified that this process of putting outfits together and feeling confident and creative was something I was truly good at. And that it was something that other people could relate to or be inspired by. Everyone needs that type of validation sometimes. Maybe that is a little narcissistic in the end, but fashion blogging has only made me more confident, connected, and creative. So if a little narcissism caused all of that, well, I guess I'm pretty okay with it.