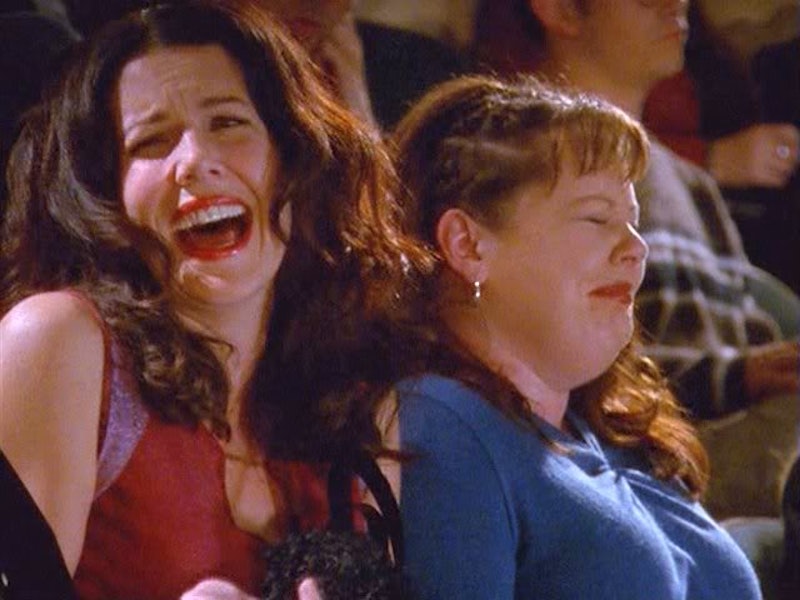 Now that fans are just days away from seeing Gilmore Girls: A Year in the Life, every last minute teaser counts, including one that confirms that Melissa McCarthy and Lauren Graham are adorable together even when the camera isn't rolling. TVLine interviewed Gilmore Girls creators Amy Sherman-Palladino and Daniel Palladino about McCarthy's day on set, and in addition to revealing that the comedian conquered a 10-page scene like a champ, the duo also confirmed that McCarthy and Graham's chemistry is still as amazing as it ever was. Yes, your heart should be feeling super warm right now.

Lorelai and Sookie's friendship was a highlight of the original series, and knowing Graham and McCarthy have a special connection offscreen as well is just as comforting as the show's trademark "la-la-las." According to Sherman-Palladino, "The two of them are like a weird, psychotic Ethel and Lucy when they get together off camera; they finish each other’s thoughts and they have a whole physical thing that they do." It is OK if you are now wishing you could have been on set the day the Lorelai and Sookie revival scene was shot, because I am right there with you.

It is unclear how often Graham and McCarthy saw each other after Gilmore Girls ended. Graham segued into another hit show with Parenthood while McCarthy became one of the most famous movie stars on the planet, but just like all good friends, it sounds like they slipped right back into their natural rhythms for the revival even though years had passed since they last shared a screen. While there is sadly no backstage video of the women getting the band back together, this amazing throwback video for Gilmore's episode 100 features McCarthy and Graham being silly and wonderful together. It's a small taste of what their epic reunion was probably like.

For a few dark days, it looked like the Gilmore Girls revival would be completely Sookie-less, leaving Lorelai without her best friend and partner in inn shenanigans. McCarthy only had time for one scene, but it is sure to be an iconic one. No one ever got real with Lorelai quite like Sookie did, and vice versa. Imagining the revival without at least one moment of Lorelai and Sookie goodness is painful. Happily, McCarthy made sure Lorelai and Sookie were reunited again.

Knowing these two talented women love to banter both offscreen and on is the best news ever. Perhaps Hollywood will take notice and let Graham and McCarthy bring their comedy stylings to the big screen soon. The revival may be the last fans ever get to see of Gilmore Girls, but that doesn't mean its stars should stop being a team. The world needs another Lucy and Ethel team, and Graham and McCarthy are the perfect women for the job.

Come on, Paul Feig, you know you want your next movie to be about two fast talking women with a gift for physical comedy. I have a feeling an army of Gilmore Girls fans would be the first in line to buy tickets.