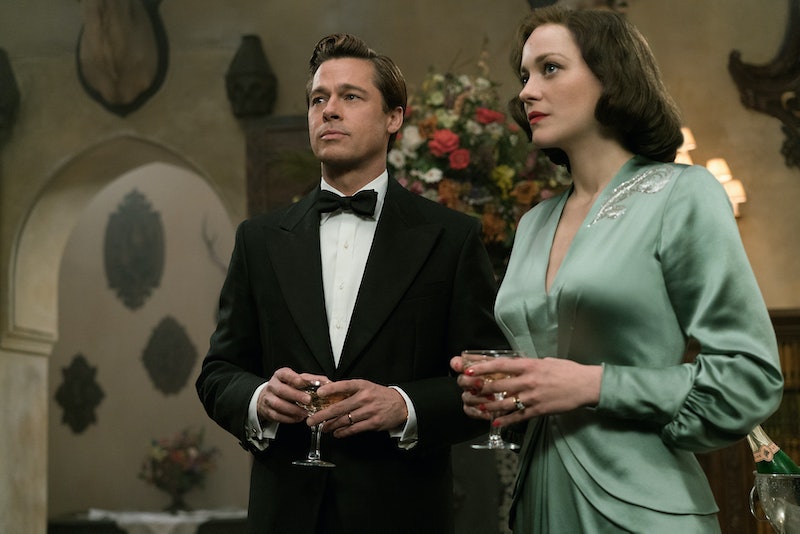 I love a good romantic drama, especially when it comes with a healthy dose of fashion. The costumes in Allied serve as an integral part of the story. The film, starring Brad Pitt and Marion Cotillard, illustrates the story of Max Vatan (Pitt), a dashing intelligence officer, and Marianne Beausejour (Cotillard), a French resistance spy who team up on a deadly mission in Casablanca to take down a Nazi camp during World War II. After falling for each other in the middle of their mission, they hope to leave all their super spy mischief behind them, but instead are pitted against each other in a test of loyalty and love.

Director Robert Zemeckis crafted the lush, distinctive film around the feel of the classic days of the 1940s, working closely with costume designer Joanna Johnston to bring the story to life. Johnston previously collaborated with Zemeckis on such films as Who Framed Roger Rabbit, Forrest Gump, and Back To The Future II.

The costumes were a major hit for Cotillard, who praised Johnston’s creative viewpoint on the project in a press release from Paramount. “Joanna understood exactly how to create a kind of classic, glamorous look that makes Marianne both a little larger than life and believable as a real woman caught in this situation,” she says. “She knows Bob’s aesthetic very well and what he wants, and at the same time is always surprising him. It was really beautiful to watch her and Bob working together.”

Johnston glamorized the characters of Max and Marianne through costumes that were entirely handmade. Many fabric choices for costumes were based on the type of climate the scenes took place in, as well as the feelings illustrated. From the characters’ crisp, desert-toned outfits in front of the backdrop of Casablanca, to their more formal outfits during scenes of parties, or in Max’s case, on duty at his military base.

In a phone interview with Bustle, Johnston explained how, “each piece’s tone and structure helped to under carry the mood of each scene.” Johnston was inspired by the movement of the '40s, and referenced photographs from that time period to help visualize the direction she wanted to take with each character’s costumes. Below are sketches of certain costume pieces from the film, shared exclusively with Bustle:

The costumes are currently on a tour in New York, Los Angeles, and overseas, to accompany various screenings of the film, and allow viewers to get an up close and personal look at the construction of the garments. "We had mannequins created according to the size of the actors to properly display the costumes as they appear in the film," Johnston explains.

Costumes on tour in NYC outside of the Paramount Pictures Screening Room.

Upon viewing the film, I instantly felt transported into the chic, sophistication that occurred during the '40s, through the construction of each garment, and how natural they the pieces felt for each intense (or not so intense) scene presented. From the character's day-to-day wear, to the decadence of Marianne's lingerie and nightwear, it's clear that the costumes help to strengthen how the elegance and difficulty of this time period is conveyed, even during the most action-packed of scenes. The elegance and close authenticity of the characters' garments are as worth watching as closely as the story line itself.

Make sure you have a front row seat to witness all the magic and beauty these costumes have to offer, when Allied hits theaters on November 23rd. I definitely plan on seeing it twice.