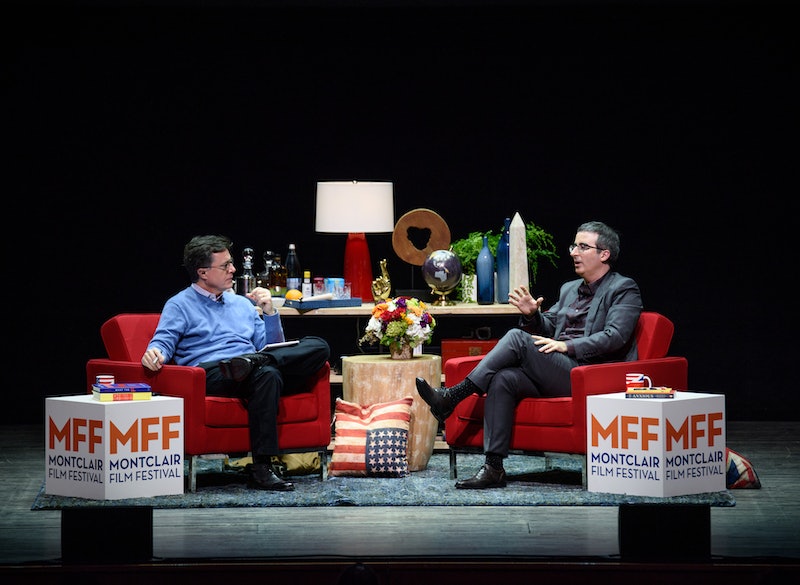 On a stage at the New Jersey Performing Arts Center, two comedians found it wasn't always easy to laugh while sharing their post-election thoughts Saturday. Stephen Colbert sat down with fellow late-night host John Oliver for a two-hour fundraising event titled "Wow, That Was Weird: A Post-Election Evening With Stephen Colbert And John Oliver." While discussing the past political season, Colbert and Oliver shared some sobering post-election thoughts about life under a Trump administration.

Refuting assumptions that Trump made for easy jokes, Colbert and Oliver discussed the challenges they had writing material that went beyond superficial narratives of Trump vs. Clinton. Colbert described the live election night episode of The Late Show he hosted on Showtime as "the hardest thing I've ever done in my professional life." "My audience was sobbing openly," he said.

At one point Colbert urged Oliver to elaborate on a warning against normalization he made during his most recent episode of Last Week Tonight, asking how the British comedian thought Americans could refrain from accepting Trump's extreme views as the new norm without living "in an adrenaline fever pitch."

"I think the danger of 'live your lives, the sun comes out tomorrow' is that that's true for some people, and so it's very easy to forget that it's very much not for others," Oliver said. "That’s the danger. If you are lucky enough for your life to become routine, it's easy not to feel the pain of others whose routines are going to be shattered."

Oliver went on to stress the importance of remembering those who stand to be disproportionately affected by Trump's administration. "Not everyone is going to be OK and it's incumbent upon everyone to remember that," he said. "You have to keep remembering that this is an abnormal version of what we've been through before."

As bleak as it may seem, there's some serious truth to Oliver's message. While some of us will likely emerge from Trump's presidency in disheveled disbelief with a few scrapes and bruises, racial, religious, and sexual minorities stand to suffer a whole lot more. The shortlist of folks that might not be OK under Trump's administration goes (in no particular order) something like this:

But you can go beyond simply remembering that not everyone will be OK under a Trump administration. Volunteer your time to advocacy groups that work to aid those who might be adversely affected by Trump's politics. Donate to the ACLU. Donate to Planned Parenthood. Donate to the National Immigration Law Center. Donate to the Sierra Club. Join the National LGBTQ Task Force. Become a member of the National Organization for Women. Support NARAL Pro-Choice America. Support the Equal Justice Initiative. Get involved with the NAACP Legal Defense Fund. Call your congressional representatives to voice your objection to Trump's policies. Continue to call them every few weeks.

"The country has a lot of problems to solve," Colbert said. "Tonight, we'll solve none of them." While Colbert freely admitted that neither he or Oliver had the key solving America's problems, their message is a reminder of what actions citizens should consider as we head toward a Trump administration. "All I know is that this whole thing about give him a chance? I'm all for giving a chance but don't give him an inch," Colbert said. "I believe everything he said, and I remember everything he said, and it's horrifying."