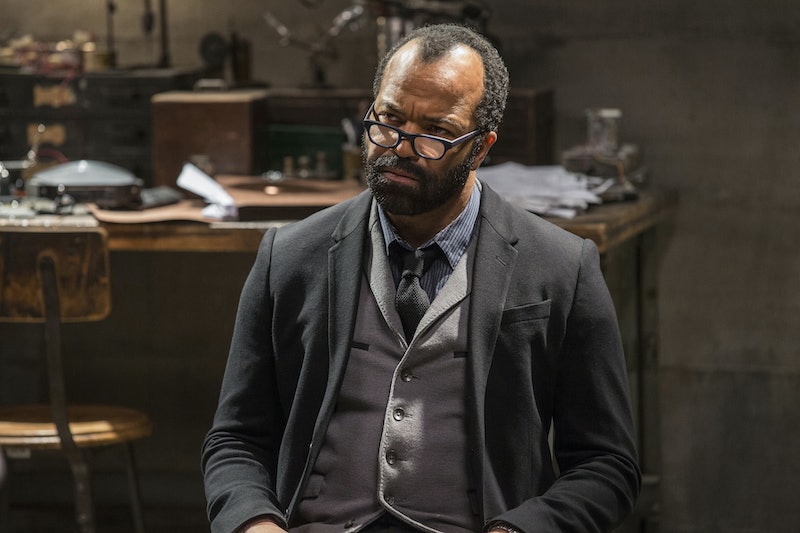 Poor, poor Bernard. The soft-spoken programmer just can't catch a break! Last week, not only did we learn that Bernard is a host on Westworld , but we then had to watch him forced to kill his own lover, Theresa Cullen, after the Quality Assurance head became too meddlesome for Dr. Ford's taste. If you thought this week's episode, "Trace Decay," would slow things down for the beleaguered character… well, you thought wrong. Because now we know that Theresa probably wasn't the host's first victim; Bernard killed Elsie, too. Or at least he probably did.

You'll remember that the plucky programmer (and frequently Westworld's sole source of levity) went missing several weeks back after finding the transmitter Theresa was using to smuggle Ford's code out of the park. Before she could divulge a critical piece of information about who was also using the transmitter to control the hosts inside the park, Elsie was attacked from behind — and we haven't seen her since.

Typically, television rules dictate that a character should never be "assumed" dead. Never believe someone's fate until you have literally seen their body. In this case, there was every reason to believe that Elsie had been attacked but was being held somewhere against her will, or possibly that she had even been surprised by someone friendly to her and was alive and well. But leave it to Westworld to subvert such a well-worn TV trope — because "Trace Decay" pretty much confirmed that Elsie is a goner.

The sad twist came when Ford was analyzing Bernard after the traumatizing events of Theresa's death. Bernard, realizing that he couldn't trust his own memories, asked Ford if the architect had ever asked him to hurt anyone before. Of course not, Ford answered — but you and me and Bernard would all be fools to believe him. Indeed, just as Ford proceeded to wipe Bernard's memory clean, we saw a quick flash — mere seconds, just a glimpse — or Elsie's face contorted in pain as Bernard strangled her from behind.

There you have it. If Ford's control of Bernard is as complete as he claims (and there's no reason from anything we've seen to believe otherwise), then Elsie is definitely dead. The only hope for her is if somehow Bernard managed to stop himself and then convinced Elsie to keep herself hidden away. It seems unlikely —but if Bernard did manage to buck Ford's control, he certainly wouldn't be the first host in Westworld to disobey orders. If Maeve can do it, so can he. Right?

It's a small sliver of hope, but it's one I'm willing to hold on to for the next two episodes. It may be foolish, but I'm going to stick to the tried-and-true TV rules: until we see her body, Elsie isn't dead.