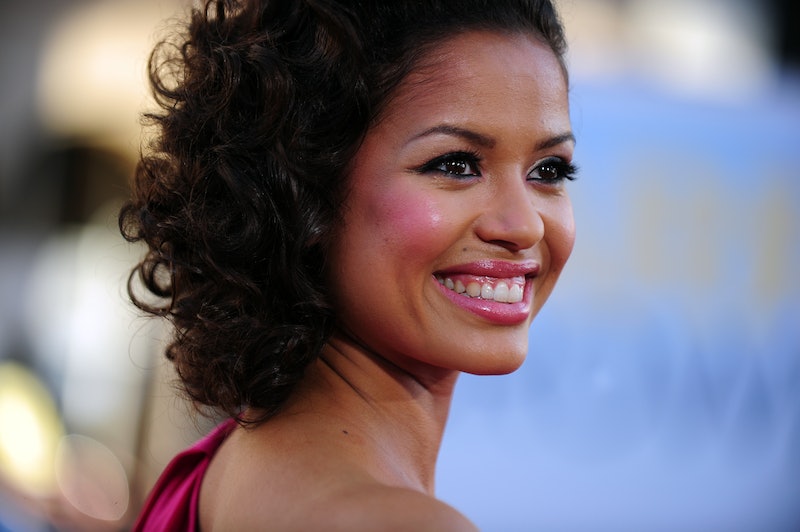 Miss Sloane is a rare type of film. Sure, there are plenty of movies about politics, lobbyists, and the occasionally corrupt system that is American bureaucracy, but hardly any — I can't think of a single one, actually — revolve around women. But Miss Sloane is different. It stars Jessica Chastain as the title character, an imperfect yet powerful lobbyist at the top of her field, and features tremendous supporting roles by other women: Gugu Mbatha-Raw takes on the role of Esme, a conviction lobbyist with a tragic past, and Alison Pill is Jane, Sloane's colleague-turned-competitor. This is a movie about ruthless and brilliant women competing in a stereotypical man's world, and according to Mbatha-Raw, is the reason why the film should be an example to young women of how they can embrace their power — just as these three characters have done.

"The script was so fascinating, especially seeing a woman at the center of this world," the 33-year-old actor says. "I got to do some research in Washington D.C. with Jessica [Chastain]. We had meetings with lobbyists and toured Capitol Hill, and it was fascinating to learn about women in politics in general. [They're] existing in this very competitive, male-dominated arena."

According to Rutgers' Eagleton Institute of Politics, women are grossly underrepresented in politics. They represent only 19.4 percent of seats in Congress, 20 percent of seats in the U.S. Senate, 19.3 percent of seats in the U.S. House, and are mayors in only 18.8 percent of major U.S. cities. And women of color represent an even smaller piece of the pie. Only six women of color currently serve as mayors in major cities, and there is only one woman of color serving in the U.S. Senate. The study goes on and on, but the findings aren't any less grim. Women, it seems, have sadly taken a backseat in politics since the dawn of time — we were given the right to vote in America less than a hundred years ago, after all — so it's extremely refreshing to see three women lead a political thriller like Miss Sloane.

"Hopefully I'm a part of something that inspires conversation," Mbatha-Raw says. "Jessica was saying just yesterday, 'Maybe you've seen George Clooney play a role like this numerous times.' But, I think to have a female-driven story from this perspective is quite radical."

It may be radical, but it's exactly what young women need to see today. Clinton may have lost the election, but three women of color won seats in the U.S. Senate, making this the most women of color in the Senate ever. Now more than ever we need media that reflects diverse politicians. Perhaps Miss Sloane will inspire a new generation of women to fight against the patriarchy — both in and out of the political arena.

"It shouldn't be so radical in 2016, but I think it's really great to see the emotional cost of ambition, also that it's OK to be prepared, and it's OK to go for what you want. Hopefully, even though [the character of] Miss Sloane is flawed, I hope that is a positive message for young women not to feel like they have to hide their power."

And flawed, she is. Sloane is a rule-breaker, and that often comes with a cost. She's made huge sacrifices to get where she is in her career, and she doesn't always have the best bedside manner. Sloane is complicated, but that's part of her appeal; young women need to see that women in positions of power are multifaceted and that they too make mistakes.

"Sloane isn't a saint, and it was fascinating for me to see two women in a movie, both wanting the same sort of good result, but with very different methods. I'm excited that this film definitely passes the Bechdel test — showing female characters operating in this world and the dynamic between them," says the actor.

And this isn't the only one of Mbatha-Raw's films making an impact. She's taking on a leading role in Ava Duvernay's A Wrinkle in Time, the first movie with a $100 million dollar plus budget to be directed by a woman of color. "By a woman, period, not just an African American woman," Mbatha-Raw corrects. "Ava is so dynamic. I'm so excited. It's such a beloved story, and such an amazing cast of women."

Women leading political films like Miss Sloane is a rarity, but so is having a woman direct a $100 million dollar feature, so perhaps times are changing. Yes, Clinton lost the election, and yes, we still have enormous hurdles to overcome every day, but this feels like a step in the right direction. So with thoughtful women like Mbatha-Raw playing such dynamic characters, it can only positively add to the equality discourse.

After all, life imitates art, and young women everywhere are watching closely.