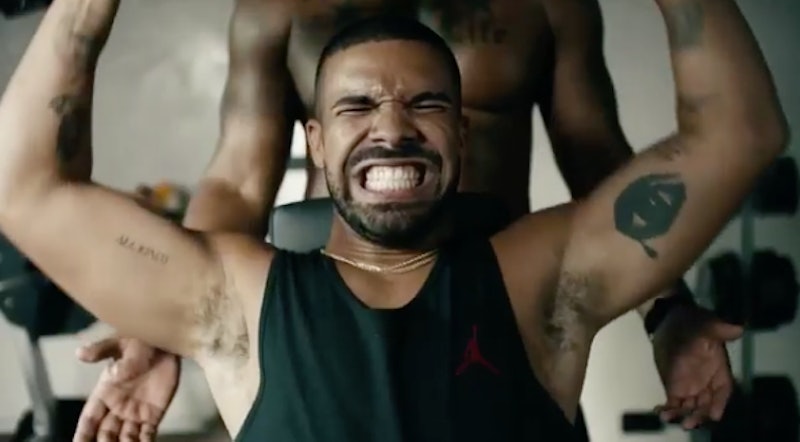 Taylor Swift’s Apple Music commercial last year involved her rapping on a treadmill to “Jumpman” by Future and Drake and then falling off. People loved it, probably because Swift and her stuntwoman do a very convincing pratfall. Drake’s Apple Music commercial debuted at the 2016 American Music Awards, and, in his ad, his gym pump-up song is, of course, “Bad Blood” by Taylor Swift. Boy, does it help him lift — until he gets distracted and falls off the bench. Oh, well. At least we got to see Taylor Swift and Drake congratulate each other on Instagram for their new commercial. Guys, it was probably my favorite faux subtweet of 2016.

I love when an artist can poke fun at his- or herself, so I very much enjoy these commercials, and I was surprised that they would be doing more. I mean, I also get really pumped up when I listen to “Bad Blood” at the gym. I also dance in front of the mirror instead of working out, much like Drake does, too. Swift must have seen that game recognizes game, and she had to call Drake out on Instagram.

My favorite parts of their Instagram posts are the hashtags — #SwiftGains and #DrakeVsBenchPress. Who would have known that Drake’s newly fit physique was the result of imagining he’s in the Swift Squad? Do you think he dreams about shopping with Gigi and Karlie and dining with Lorde and Lena?

I don't know about you guys, but I see endless options for these Apple Music commercials. Maybe Swift and Drake can work out together? And Teyana Taylor, who was in Kanye West's "Fade" video, can come in and completely intimidate them with her gym dance moves? Or Rihanna can come in and teach them how to "Work"? Apple Music, if you need me for a commercial idea brainstorm, I'm absolutely ready to help.