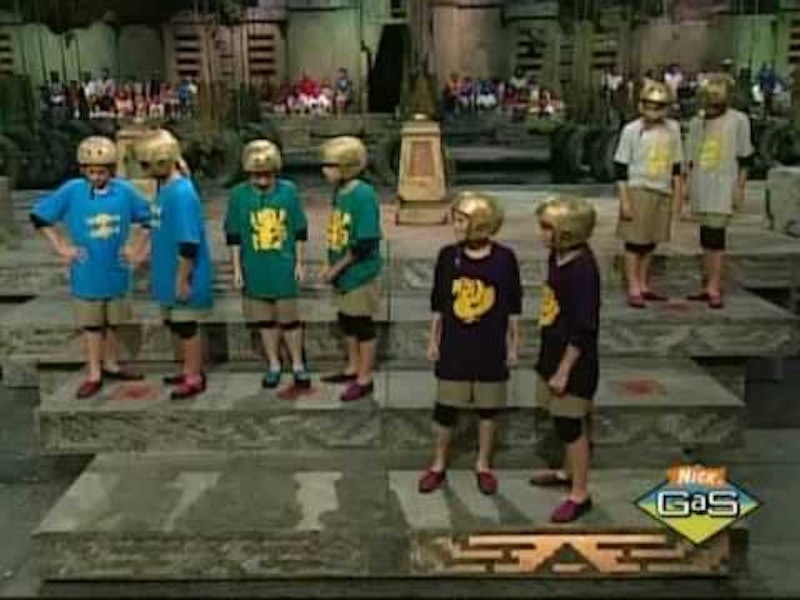 Is it even possible to put into words how obsessed we all were with Legends of the Hidden Temple in the '90s? It doesn't matter that this action-adventure game show for kids only aired for three seasons — we were hooked. And since we all imagined ourselves at some point suiting up in one of those team t-shirts and seamlessly retrieving the designated artifact from the temple to win the game, I thought it would be fun to pinpoint what your Legends of the Hidden Temple team is according to the zodiac. Mind you, this is in no way scientific, because zodiac. What it is, though, is some good ol' fashioned nostalgia pandering. Who doesn't love that?

As you probably well remember, each episode of Legends of the Hidden Temple consisted of six teams of two contestants duking it out during three rounds of competition to determine who would enter the temple. These teams were designed by the t-shirts the contestants wore — a different color and animal logo for each different team. The names of these teams were the Red Jaguars, the Blue Barracudas, the Green Monkeys, the Orange Iguanas, the Purple Parrots, and the Silver Snakes.

I personally always fancied myself a Blue Barricuda, but let's see what the zodiac has to say about that, eh? Keep reading to find out the team your sign matches the most.

It's Blue Barracudas for you, Rams. Like the barracuda, you are quick in both action and motion — it takes a special kind of energy to keep up with your energy and never-ending sense of adventure. It's precisely that sort of dynamic behavior that always made the Blue Barracudas a force to contend with.

If you've ever seen Jurassic Park, then you know that some of the most formidable dinosaur species are more closely related to birds than reptiles. So don't go discounting the Purple Parrots, because they are fierce competitors. Remind you of anyone, Bulls? Also, purple has historically been a color associated with wealth and royalty, and I think we all know that Taureans can't resist a little (or a lotta) luxury in their lives.

Ruled by Mercury, Geminis are a perfect fit for the Orange Iguanas. It is hypothesized that these creatures represent "nature's third eye," which hearkens deep metaphysical thoughts and scientific exploration. And if you've ever had a long conversation with a Gemini, well, you're no stranger to exploring the paraphysical ramblings of the mind.

You can't help but love a Crab, because this sign is loyal to a fault. Having said that, Crabs are also — how shall we put this? — a tad bit moody. Also, since they are inherent homebodies, Crabs can be a bit evasive. All of this points straight to the Silver Snakes. Snakes, as you can imagine, are rather stealthy creatures. And although they can be quite docile in the right hands, they are capable of delivering quite the bite if provoked.

Call it a big cat thing, if you will, but there's simply no team better for lively Leos than the Red Jaguars. A fire sign, Leos are impossible to ignore — they are the life of every party and often the most popular person in the room. Hence, the Red Jaguars. This team is considered the dominant Legends team and, as such, often consists of alpha personalities. Helloooooo, Leos.

Virgos demand nothing less than perfection, both from themselves and from others. This perfectionism tends to make them extremely successful in life, albeit a bit hard to be around at times. Fortunately, their humor and loyalty round out their personalities, making them the type of people others are drawn to. Is it any surprise they would translate to the dynamic, alpha mentality of the Red Jaguars?

Since it is rumored that the Green Monkeys symbolize the ancient Mayan belief of balance in life, there isn't a sign more suited to this team than Libra — also known as "the Scales." Gracious and balanced, Libras believe in putter the greater good before their own needs. The same can be said for the Green Monkeys, who reputedly served as the gatekeepers of the magical Mayan cactus fruit.

Make no mistake, the Blue Barricudas are intense. They're fast on their feet and quick to launch an all-out attack (watch a few Legends reruns, and you'll pick up this pattern). Scorpio, as it were, is arguably the most intense sign of the zodiac. This sign is passionate, and sometimes that passionate compels them to strike out swiftly.

Let's start with the obvious first — purple is the color of the zodiac sign Sagittarius. So there's that. But there is also the fact that the Purple Parrots symbolize strength and the love of the finer things in life. This aligns all too well with Sagittarians, who have a hunger for travel and finding new places to explore and enjoy. Plus, like the regal Purple Parrots, people look up to Sagittarians for their charismatic presence.

Not only is Capricorn an earth sign — which, c'mon, is the element most connected to snakes — but this sign is also powerful and determined to reach their goal, no matter what they have to do to get there. Have you ever crossed the path of a snake? Yeah, they're gonna go where they want to go, and you'd do well to get out of the way and let them go.

Oh, quirky Aquarius — you're forever entertaining with your eccentric theories and ruminations. Accordingly, you definitely would have been on the Orange Iguanas had you made a cameo on Legends of the Hidden Temple. We've already touched on how the Orange Iguanas are likened to being in their mind almost too much, and that's basically what it means to be born into the Aquarius sign as well. Aquarians are a never-ending source of ideas and intellect.

The most sensitive sign, Pisces deeply empathize with others. In fact, they are said to feel the pain of the world and respond to its suffering. This makes emotional Pisces a shoo-in for the Green Monkeys, who are said to embody the wellness, health, and happiness of all people. Green Monkeys, like Pisces, are vehicles for the greater good.