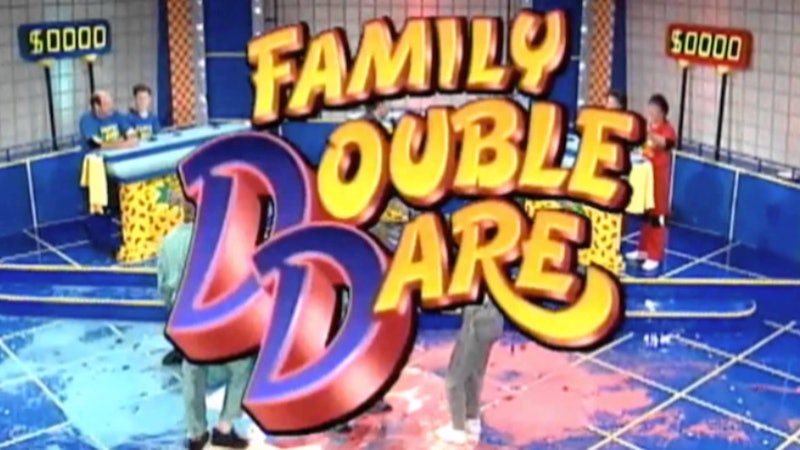 I truly feel sorry for kids today. They have never felt the pure unadulterated envy of watching a child search for hidden objects in a giant nose, and I'm sure they've never smugly thought to themselves, "I could totally assemble the Silver Monkey faster than you." The lack of modern children's game shows is truly a shame. In the '90s, though, kid game shows reigned supreme — and most kids wanted to be on a game show, whether it was Guts or Supermarket Sweep.

The life goals of your average '90s kid were basically: Convince your dad to buy you a Lunchables, figure out what Pogs are for, and audition for Legends of the Hidden Temple. Now that Nickelodeon is actually turning Legends of the Hidden Temple into a TV movie, my old school game show nostalgia is getting out of control. Sadly, I will never scale the Aggro Crag, but my dream — and the dream of '90s kids everywhere — still live on thanks to grainy YouTube videos of the game shows from the past.

Trust me, '90s game shows were legit. With their slime and geography questions, these 11 game shows every '90s kid wanted to be on remain unmatched to this day. Prepare to feel some serious nostalgia for Marc Summers, because you know you will never stop wishing you could time travel back to the '90s for a shot at Double Dare glory.

1. Legends Of The Hidden Temple

Before there were the Hogwarts houses, there were the Red Jaguars, the Blue Barracudas, the Green Monkeys, the Orange Iguanas, the Purple Parrots, and the Silver Snakes. Trust: you and your BFF knew exactly which team you would want to be on if you ever got on the show. Of course, the highlights of the show were undeniably Olmec Head's sass and the final Temple Run which is surely the best part of childhood for every contestant that was ever on the show. If you grew up in the '90s and didn't have a game plan for assembling the Silver Monkey, I just don't know what you were doing with your life.

Who were these wonderful families who indulged their child's dream of digging gunk out of noses and getting covered in slime? If I had asked my mom to let me launch pies at her face on national television, I would have received the dreaded arched eyebrow of doom. Also, at the time, the prizes were the best — the glory and the potential to win a Sanyo keyboard were more than enough reasons to want to fly out to Florida to audition.

I don't care if you hated all sports, you know you wanted to climb the Aggro Crag. Reaching the top meant you got to go home with a shiny green Guts trophy, which seemed like the highest honor a child could possibly receive.

Honestly, it wasn't that hard to recreate most of Wild & Crazy Kids on your own playground. There were three-legged races, Simon Says, and massive games of Twister. Sadly, without the potential to take a pie to the face or get doused in a bucket of slime by Omar Gooding, it just wasn't the same.

5. Where In The World Is Carmen Sandiego?

If you weren't into sports, then for you, the Holy Grail of '90s game shows had to be Where in the World Is Carmen Sandiego? — the show fed into your natural kid curiosity and love for being a detective. If you were a total smartie at school, it probably represented a way for you to revel in your geography skills in front of all of America's youth. Plus, who didn't want to find Carmen Sandiego (and then let her go because she was too cool to lock up in prison)?

You got to go inside a video game! It looked like actual magic. I'm sure the reality wasn't nearly as cool, but from your couch it looked like the greatest thing that could ever possibly happen to you.

Supermarket Sweep was aimed at adults, but the show has universal kid appeal because it fed into your deepest desire: to run through a supermarket ripping items off the shelves with no consequences. You can still taste the freedom, can't you?

Marc Summers hosted this Nickelodeon classic, and the best part about it was all you had to do was be in the audience to get picked to play a game. This added excitement plus the sheer awesomeness of The Pie Slide were more than enough reasons to envy the studio audience of this show.

No, kids weren't allowed to be contestants, but that didn't stop one single child from wanting to wack another person in the head with a giant Q-tip.

Bozo was pure nightmare fuel, but the bucket game was legit. While you most likely spent most of the show with your eyes covered in fear, the minute Bozo broke out the buckets it was on.

If you were lucky enough to be on Figure It Out, you already had some sort of special talent, but even if you were like me and you were seriously lacking in the talent department, you envied the kids on the show because they got to interact with your favorite Nickelodeon stars. Even CatDog was on the show! The '90s truly were a great time to be alive.

No matter how old you get, you will likely never stop wishing you could be on these game shows. And hey, at the rate '90s shows are making comebacks, you might still have a chance!