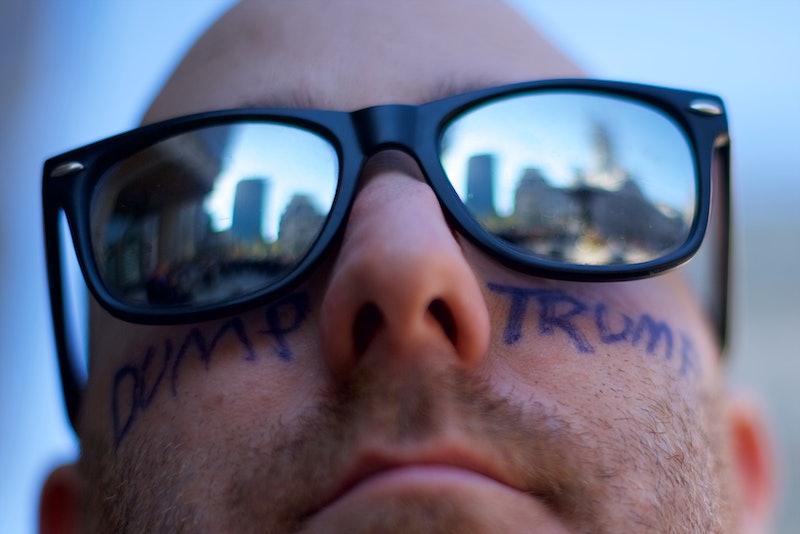 Ladies and gentlemen, as you well know by now, this is not a drill. Donald Trump's campaign and subsequent election to the White House have unleashed a wave of nasty sentiment on so many fronts, with much of it in the white supremacist vein. There are ways to combat this alt-right mentality, though, and it's time to start thinking about them. Running between all the approaches to this huge problem, though, is one big theme: The inclusive voices have to be louder than the white nationalist ones.

First of all, you've got to start calling the alt-right movement what it is: old-fashioned white supremacism. This is an arena where Antisemitism is standard, despite Steve Bannon's claims to the contrary, where Islamophobia is "rational," where anti-feminism is the norm. They couch it in the notion that it's instinctive to feel "wariness of the foreign and the unfamiliar," which doesn't sound so bad as a phrase, right? It's true that humans have an in-group instinct telling them to watch out for strange things that could be dangerous, but anyone with a Twitter account doesn't live in a cave anymore. That wariness might have counted a couple hundred thousand years ago, but now it's just code for racism.

These ideas and the people who espouse them have now been normalized to some extent, what with Donald Trump's appointment of white nationalist extraordinaire Steve Bannon as his chief strategist. But that can't stand. Barack Obama's administration has been a heyday for women and minorities in high-ranking federal positions, and that's the way forward, despite the way Trump has made his appointments so far. If you think that white men who speak openly about their racist beliefs should have less power, you definitely shouldn't like the figures in the Trump administration so far. However, there are ways to protest Trump's appointments, and you should take advantage of all of them.

After you've taken concrete steps to speak out against those people, don't stop letting your voice be heard. Write letters to the editor of your local paper, for example, or submit editorials to online or in print publications. Stand up to people you see being harassed so that everyone feels safe in his or her own city. Know that hate speech is protected under the First Amendment, but that fighting against it is also protected.

The prevailing rhetoric in the country has in recent decades been one of inclusivity and acceptance of diversity, but Trump has exposed a layer of society that was never okay with that. It's highly unpleasant and sometimes even dangerous to see it out in the open, but now that it's there, at least the inclusivity and diversity can push back.