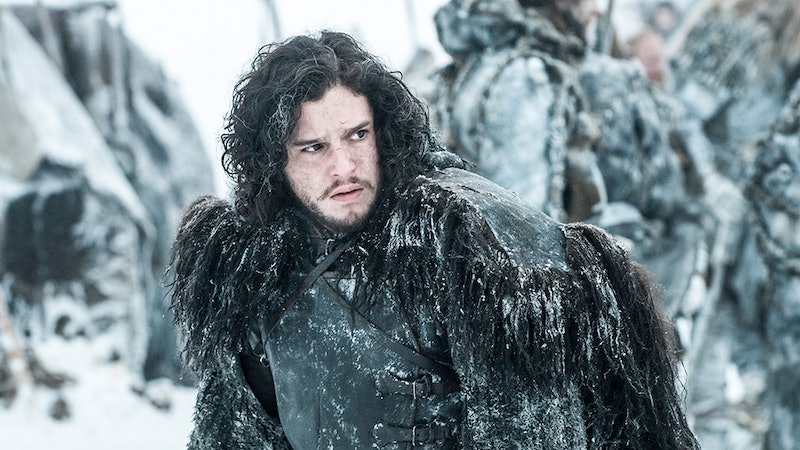 On-screen adaptations can be a perilous thing for book-lovers. On the one hand, it's so exciting to see our favorite fictional characters brought to life by talented actors! On the other hand... now all our friends have to listen to us complain that the Game of Thrones TV writers made Xaro Xhoan Daxos way less gay and much more evil. So, with one huge SPOILER ALERT, let's get down to business and talk about the biggest differences between the Game of Thrones TV show and A Song Of Ice and Fire.

Now, there are a few changes between show and books that are necessary for a screen adaptation. Everyone is older, because child actors grow up (and no one wants to see a 13-year-old girl get married on TV). Many plots are streamlined for time (I don't think anyone's complaining that the show gave Edric Storm's role to Gendry, or made Loras the only Tyrell son). And of course, the TV show has now zipped on past the books —we don't know yet how the books are going to handle Shireen's death, or Jon Snow's resurrection, or Hodor's tragic fate. But still... some things are just undeniably different (and not just all the added "sexposition" scenes).

So, while we wait for season seven, or for GRRM to finally crank out The Winds of Winter, here are some huge changes between books and show to lecture your friends about:

In the show, Ramsay Snow/Bolton marries Sansa Stark, because Sansa's life wasn't terrible enough as is (and because he wants to legitimize his claim on Winterfell). But in the book, he marries Arya Stark—or rather, he marries Sansa's BFF Jeyne Poole, who's disguised as Arya Stark. Sansa remains hidden at the Eyrie. It's a much better deal for Sansa... but you can see why the TV show would want to simplify the story and give Sansa a larger (albeit more horrifying) role.

Do the TV writers have something against people named Jeyne? In the show, Robb Stark marries a lovely nurse from Volantis named Talisa Maegyr, ruining everyone's lives in the process. Talisa is pregnant with Robb's baby when she's violently stabbed to death at the Red Wedding. In the book, Robb still breaks his marriage contract with the Freys, but he marries Jeyne Westerling, which is doubly awkward because the Westerlings were supposed to be team Lannister. Jeyne doesn't get pregnant or attend the Red Wedding, though, so she avoids Talisa's grisly onscreen fate.

WHERE IS LADY STONEHEART? Look, I understand that the show can't have every character from the books, because George R.R. Martin introduces a new character every other page. But in the book, Beric Dondarrion's band of outlaws resurrects the deceased Catelyn Stark, killing Dondarrion in the process. Catelyn returns as the badass zombie queen Lady Stoneheart, and seeks revenge for her murdered children. In the show... Catelyn just dies and we don't get any awesome zombie ladies whatsoever.

4. Basically everything that happens in Dorne

Oh boy, so... there's a whole lot of Dorne plot in the books that the show just tried to gloss over with that whole awkward Jaime-and-Bronn-go-to-Dorne buddy comedy subplot. In the books, Dornish Princess Arianne Martell is a major character, and she tries to crown Princess Myrcella as Queen of the Seven Kingdoms. Her brother, Quentyn, travels to Meereen to try and marry Dany, and ends up getting roasted by a dragon. It's a whole thing.

5. ...and everything that happens on the Iron Islands

As of the end of season six, the show has had Yara and Theon Greyjoy join Dany's entourage to take back the Seven Kingdoms, with their nasty Uncle Euron ruling the Iron Islands. In the books, Yara is named Asha, and she's just been captured by Stannis, while her other uncle Victarion Greyjoy heads to Meereen to (you guessed it) try and marry Dany, while Euron rules the Iron Islands and is maybe involved with a Faceless Men plot to try and hatch another dragon egg??

6. Brienne wanders around a lot

Brienne of Tarth is one character that the TV show really did get right. They just gave her a very different road trip through Westeros: in the books, Brienne searches for the Stark daughters but never finds them, and ends up on trial for oath-breaking by Lady Stoneheart (AKA Zombie Catelyn). But the show cut Zombie Catelyn, so Brienne ends up fighting the Hound and finding and losing both Arya and Sansa instead.

7. All the Stark kids are wargs

Well, kind of—in the books, all the Stark kids dream that they are their direwolves at various points. Jon first sees Mance Rayder's wildling army through Ghost's eyes, and Arya pulls her mother out of the river as Nymeria. In the show, Bran's the only one with magic powers, and there's not nearly enough wolf action.

He's killed by the Sons of the Harpy in the show, but in the books he's still alive and kicking well past that point. Also in the books, Jorah is way more creepy towards Dany and Missandei is eleven.

9. Coldhands is way late to the party and Jojen is dead

C'mon, TV show. We don't get to see Coldhands ride an elk? The show made Bran's trip North much more exciting and bloody, killing Jojen Reed and leaving out Coldhands, the friendly zombie with a secret identity who helps them find the Three-Eyed Crow (it's a raven in the show). The TV show has Bran and Meera escape the cave, and then Coldhands rolls up for a cameo, ruins the mystery by telling us all that he's Benjen Stark, and peaces out.

10. The King Beyond the Wall dies (but actually)

Poor Mance Rayder. The show already cut his wife and baby, and then they kill him off prematurely. To be fair, his death scene is the same in the book... but in the book it's revealed that Melisandre used her magic to kill Rattleshirt instead of Mance, and Mance is still alive disguised as Rattleshirt. Plus, his baby gets swapped with Gilly's baby, in a whole subplot that the show didn't even touch.

Yeah, yeah, Jon's a secret Targaryen. But in the book, one of the huge reveals is that Aegon Targaryen, legitimate son of Dany's big brother Rhaegar, is actually alive (unless maybe he's an impostor?). Varys has been hiding him away all these years, preparing him to retake the Seven Kingdoms. Naturally, some people are rooting for him to marry Dany and go full Targaryen. We don't know yet if his existence is going to mess with her claim on the throne. But the show hasn't shown any indication that they're going to include Aegon, because apparently there's plenty of plot to go around without him.