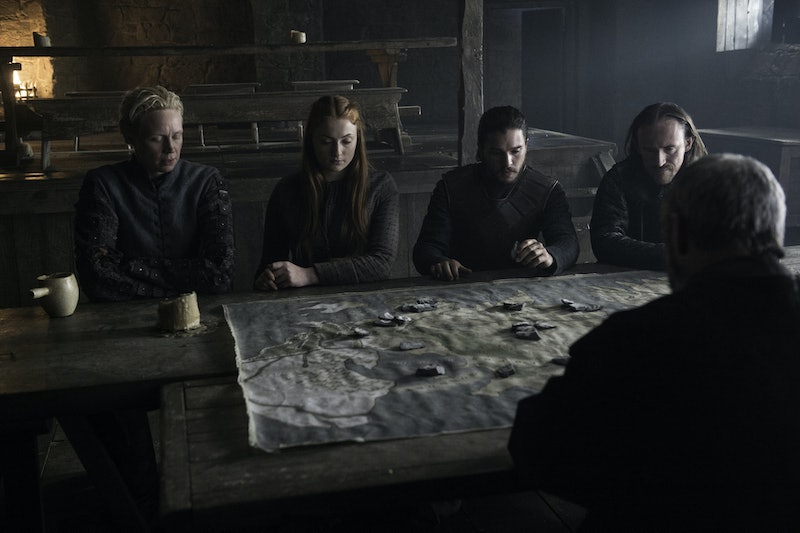 When it premiered on HBO in 2011, I was torn on whether or not I should read the books that inspired Game of Thrones — George R. R. Martin's A Song of Ice and Fire series. I decided the show was so good on its own that I didn't want to spoil it for myself by knowing what was going to happen. Up until now, I had been confident in my decision of avoiding the books, but Season 6 of Game of Thrones has made me accept the fact that it's finally time to read A Song of Ice and Fire .

Like many book junkies out there, I fully support the notion that the book a TV show or movie is based on is typically the superior art form (I'm looking at you, Harry Potter). But Game of Thrones was so tremendous from the get-go that I decided to stick with HBO's telling of Martin's story. The surprise endings from Season 1 episodes, like Bran being pushed from the window after seeing the incestuous Cersei and Jaime or main character Ned being executed, had me at the edge of my seat each Sunday night. So I wanted to watch — not read — how showrunners David Benioff and D. B. Weiss presented Martin's story without each crazy twist being spoiled for me.

Yet, Benioff and Weiss have proven in Season 6 that Game of Thrones is not the A Song of Ice and Fire books. The TV series is moving forward regardless of where Martin is with his books, fully cementing that these two different mediums are providing two different stories. In light of this, here's why I'm going to pick up the books now that Season 6 of Game of Thrones is over — and why you should too if you haven't read them already.

While recently discussing embarking on the books at a party, a reader of the series explained how Martin goes into great detail about the histories of the families of Westeros and beyond. Like Bran gaining insights through his visions as the Three-Eyed Raven, you too will start comprehending the intricacies of the relationships on Game of Thrones when you read Martin's rich history.

Game of Thrones showed a young Cersei having her future told and Melisandre is always going off about "the prince that was promised," so prophecies are important on the show, but they are even more robust in the books — like that Cersei was told that, along with all of her children dying, she will be killed by her younger brother.

With knowing Martin's versions of the family histories and prophesies comes the ability to speculate even more wildly about what might happen on Game of Thrones. For instance, the fan theory R+L=J was revealed to be true in the Season 6 finale of the HBO series and while the show had been giving hints about Jon Snow's parentage, book readers always have a leg up on show watchers when it comes to theories.

As frustrating as it has to be waiting for Martin to release a new book, he is the creator of the Game of Thrones world. He invented the story and characters and set the tone for Benioff and Weiss, so he deserves your respect. Plus, David Orr from The New York Times credited Martin in 2011 with having a "nearly supernatural gift for storytelling," so you know the books are damn good.

It sure would have made the return of Uncle Benjen as Coldhands much more interesting if I had known who Coldhands was in the first place. While Coldhands finally got his (extremely limited) time on the show, there are a plethora of book characters still not on the show, as Den of Geek highlighted. So it's time to understand what all the fuss is about when a character in the books is not featured on the show.

As I mentioned, the main reason I didn't read the A Song of Ice and Fire novels when I first started watching Game of Thrones was because I loved being shocked by the TV series. Now that Benioff and Weiss seem to have their storytelling track set, I expect less major spoilers from the books to appear on Game of Thrones (yes, I realize I am foolish to think this) and I am excited to read the other stories Martin has told that haven't made it to the series yet and may never will — like that Lady Stoneheart story line.

If you love Game of Thrones, then you'll totally love nerding out about it on a completely different level by comparing the show to the books. Reading the books will help up your party banter as well — because obviously a rager isn't complete nowadays without a discussion about Game of Thrones.

Speaking of comparing and contrasting, I know that Tyrion looks notably more attractive on the TV show and that many characters should be younger than they appear, but I want to see (and read) for myself Martin's character descriptions to see how I think the show did. For example, Daario is supposed to have blue hair, but Game of Thrones clearly had enough trouble with casting Daenerys' lover since he has been portrayed by two different actors.

I was completely naive to the fact that many book readers hated the way the TV series portrayed Dorne until after Season 5. Albeit it was a little lame, I didn't have any big issues with the Sand Snakes, but reading the books will give me the badass Dorne that readers had expected and I can see if the outrage was legitimate.

Something unique to the books is that each chapter is presented from one particular character's point of view. This will give you a more intimate look at what is going through a character's head that the show just can't provide — and it shouldn't be shocking to know that Tyrion and Jon lead the pack when it comes to the number of chapters from their points of view.

There are only two more seasons left of Game of Thrones, so you know you're grieving. You can keep up with the Game of Thrones fandom and world for a long time even after the show ends if you read the books — it's not like Martin will be finishing them anytime soon.

12. Enter A Deeper Level Of This Fascinating World

While watching new episodes of Game of Thrones for an hour or more on Sunday nights in April through June is utterly mesmerizing, reading a book can transport you completely.

Tyrion's a big reader and as Tyrion has some of the best judgment on the show, I want to emulate whatever he would do.

So join me in reading Martin's A Game of Thrones, A Clash of Kings, A Storm of Swords, A Feast for Crows, and A Dance with Dragons and truly prove your devotion to the glorious TV series that is Game of Thrones.