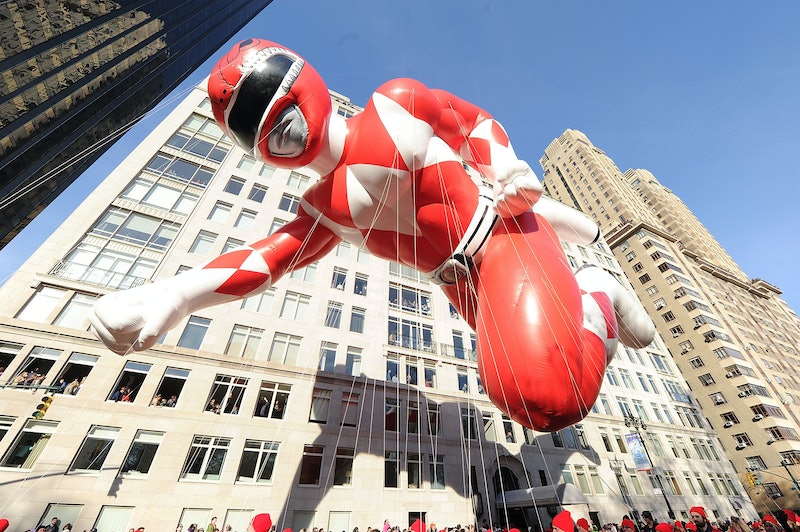 Change can be scary and uncomfortable, so it's good to know that some traditions are reliable. On Thanksgiving, those traditions are you and your sister arguing over the last crescent roll and the Macy's Thanksgiving Day parade. Before the kitchen preparation starts in earnest, families can sit down in front of the TV together to watch parade floats and marching bands go by. It's loud and a little mindless, but it's also bright and wholesome. With the divisive results of the election making dinner tables tense places, a completely noncontroversial event like the Macy's Thanksgiving Day Parade could be just what America needs on Thursday morning. (And the celebration is marking its 90th anniversary in 2016!) The Thanksgiving Day Parade broadcast starts at 9 a.m. ET on NBC and lasts until noon.

NBC and Macy's are thoughtfully offering families across the country three solid hours of G-rated entertainment. You won't have time to bicker when you're discussing the merits of modern balloons like Pickachu and Scrat from Ice Age versus vintage favorites like Charlie Brown and Paddington Bear. You can let NBC anchors Matt Lauer, Savannah Guthrie and Al Roker do all the talking while you and your relatives sip your coffee in peace. And performers like Sarah McLachlan, Aloe Blacc, and the casts of Broadway shows Waitress, Holiday Inn, and Cats will calm your nerves with their musical interludes. Trust me, this is exactly where you want to be on Thursday morning.

After the parade is over, keep the truce going with these innocuous family activities:

One of my favorite things to do when I'm at my parents' house is to load up on Throwback Thursday material. Dig out some old albums and spend the afternoon laughing at each other's bad haircuts and mock turtlenecks. Remember friends and relatives who are gone and that time the heat went out in your vacation cabin and you had to sleep in a gigantic puppy pile to stay warm. Take pictures with your phone, and you'll have enough epic #TBT posts lined up to last until Thanksgiving 2017.

Not Monopoly. That's a surefire start to a family feud. Charades is much safer.

Clean Out Your Room

How long has it's been since you've dug into the back of your closet? Your parents will love you for doing some organizing, and you're bound to find some memories long forgotten. Think old toys, mix CDs, prom corsages, and maybe even clothes that have come back into style again. Don't forget to throw out or donate whatever you know you don't want anymore.

Pull up a casual rewatch like Friends or Gilmore Girls or introduce your extended family to a show they may not have discovered on their own. My pick? No reality competition is as pure as the The Great British Baking Show; it'll soothe everyone to watch a lineup of amateur bakers make puns and be nice to one another.

With these recommendations, you can kick off your holiday with the Macy's Thanksgiving Day Parade and keep that serene mood going until it's time to carve the turkey.