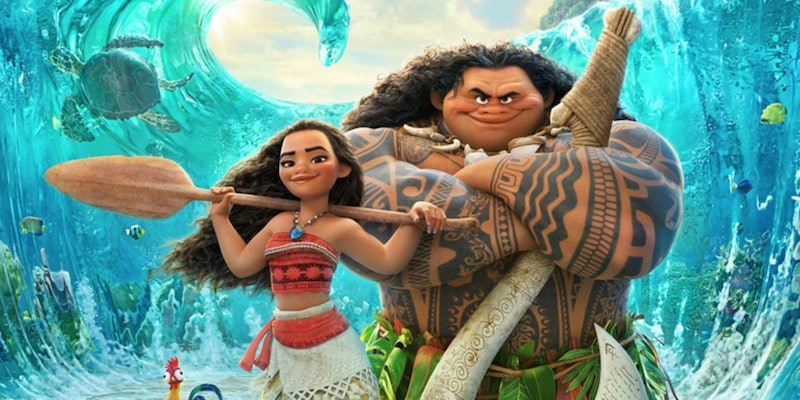 The filmmakers behind Moana put in plenty of effort to make the film as culturally accurate as possible. To tell the tale of Disney's first Polynesian hero, the animation giant formed the Oceanic Trust, "a group of anthropologists, cultural practitioners, historians, linguists, and choreographers from islands including Samoa, Tahiti, Mo'orea, and Fiji," Vanity Fair reports. The goal was to get Polynesian cultures right, and one of the areas in which the film nails it is in its portrayal of Polynesian tattoos. As a tattooed person myself, I was not only amazed that Disney would include them in the film, but totally normalize what some Western cultures still see as a "deviant" act. By featuring body art in Moana , Disney is doing a great deed to destigmatize the art form.

Moana as a film and character are revolutionary for a number of different reasons. As said, she's Disney's first lead of Polynesian descent, and she also has no love interest, unlike the many female leads of Disney movies before. But it's also quite radical to see an animated Disney movie feature characters that are heavily tattooed. There's a lot of historical and modern stigma about having tattoos, even to this day, and the fact that Disney would embrace tattooing and attempt to normalize it truly awesome. Besides, excluding tattoos from the film would simply be historically inaccurate. According to PBS' Skin Stories: The Art and Culture of Polynesian Tattoo, tattooing on the Pacific Islands dates back 2,000 years. Each island has its unique styles, traditions, and methods, but tattoos in the world of ancient Polynesia were a proud fact of life for all.

Moana doesn't take place on any specific Pacific island, but the inspirations behind the portrayal of traditions, music, and clothing in the movie all cull from a variety of Polynesian cultures. When it comes to tattoos, specifically, there are some great scenes that present just how important inked body art is to Moana's culture. There's a quick shot of a young man getting his first tattoo using the traditional tapping mallet, Moana's father is adorned with a number of tattoos, and Moana's grandmother has a few as well, including a huge manta ray on her back that represents her spirit throughout the film. But the most-tattooed character in the movie is the demigod Maui, whose entire body is adorned with elaborate scenes. There's even a magical "mini Maui" on his body that comes to life to tell the stories of his adventures.

As Maui says in the film, new tattoos appear on his body after significant events, and the ones he features aren't just made-up designs Disney's artists thought looked neat. For Maui's tattoos, The New York Times reports, "The Samoan tattoo artist Su’a Peter Sulu’ape, a sixth-generation master tattooist, checked every mark and pattern." This level of accuracy really makes the animation behind the film all the more wonderful. Besides, something tells me the voice behind Maui, Dwayne "The Rock" Johnson, wouldn't have it any other way. Johnson, who is half Samoan, is familiar with the Polynesian tattoo process. In 2003, he had his family history inked on his chest, shoulder and arm — a Samoan tradition — by a famous Tahitian artist named Po’oino Yrondi. The process reportedly took 60 hours and, according to Johnson, tells many stories of his life and family.

Yet while Moana goes to great lengths to depict accurate and respectful tattoos, there's one area where the filmmakers missed an opportunity, and that's in not giving a tattoo to Moana herself. On most ancient Pacific islands, women were just as frequently tattooed as men. "In fact, the tattooing of women was considered to be more sacred in some ways than tattooing the men," PBS' Skin Stories reports. In Samoan culture, men got full-body, hip-to-knee coverage, while women's patterns were smaller, usually on the thighs, legs, or hands. But girls around age 12 would typically get one of their hands tattooed, after which they would be permitted to perform the ceremonial washing of dead bodies and prepare the traditional narcotic drink called Kava. Maori women of New Zealand traditionally got Moko, tattoos under their mouths on their chin to mark passage into adulthood and commemorate special occasions.

Moana's Grandma Tala has a very large back tattoo, and her mother has a much smaller designs on her arms. So it's a shame that the movie chose not to decorate Moana, too, with one of her people's most sacred marks. After all, she's come of age, and the extensive journey she goes on in the film would certainly warrant getting ink to commemorate it, be it magically like Maui or in the usual way. Perhaps a tattooed heroine would be a step too far for the family-oriented Disney, but maybe in the future, that'll change. Thankfully, Moana is breaking plenty of other barriers when it comes to Disney's heroines, so it can only get better from here.

More like this
Meet Foreverist, The Skin Care Brand That Keeps Tattoos Looking Fresh
By Audrey Noble
Jennifer Garner Shared The Beauty Wisdom She Thinks Is Better Than Fillers
By Brad Witter
Amanda Seyfried Says She Felt Pressured To Shoot Nude Scenes At 19 Years Old
By Jake Viswanath
Someone Must Pay For What Happens To Bad Bunny In 'Bullet Train'
By Arya Roshanian
Get Even More From Bustle — Sign Up For The Newsletter