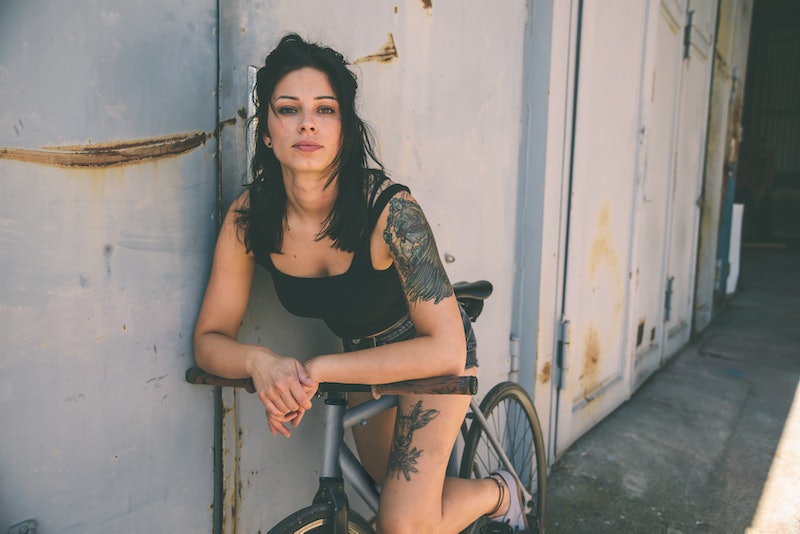 Recent research has demonstrated that when it comes to men and women with tattoos in the workplace, stereotypes still exist — proving that we're still under many misconceptions about people with tattoos. A recent study published in the Journal of Retailing and Consumer Services, for example, found that when comparing tattooed male and female surgeons, participants preferred the tattooed female surgeon. It's especially ironic considering that the results were the opposite when the occupation was a mechanic, despite the fact that both of these fields are male dominated. Regardless, gender bias is there, one way or another.

Tattoos are becoming increasingly commonplace, with a whopping 40 percent of millennials getting inked. They're not as worried about hiding them anymore, as employers have become more accepting of body art — but the stigma is still there. In a 2014 survey conducted by Careerbuilder.com, 31 percent of human resources managers said that visible tattoos can reflect negatively on a potential hire. You know what weighs even heavier, though? Bad breath. One is a form of art; the other is bad hygiene. What does that tell you?

Clearly, some of us remain confused about what tattoos do and do not mean, so let's clear that up. Here are five things people with tattoos want you to know.

Results of one study showed that tattooed women were rated as more sexually promiscuous than women who were not tattooed. Let me assure you: A woman's desire to have or not have sex cannot be determined by anything aesthetic. Also, enough with the gender-based, sex-shaming insults.

People seem to think that women with tattoos love bonging beers and pounding shots. While some women do enjoy these activities, once again, it has nothing to do with their abundance or lack of tattoos. I've seen girls with virgin skin pass out face down on bathroom floors after a night of drinking, and I've seen people with tattoos enjoy many a quiet evening in with Netflix and a couch for company.

4. We Can Be Anything We Want To Be

More than once, I've heard, "Well, how's that going to look in a wedding dress?" in response to a woman with tattoos. "It won't look so hot when she's older" is another common one. Why this misconception that women with tattoos are less attractive? And what in the hell do weddings have to do with it? Do people say that to men? I smell a stinky pile of gender bias.

So, What Does A Tattoo On A Woman Mean?

It means she has a tattoo.

A woman (or man!) who decides to get inked causes no harm to anyone else; let's all try to be a little more openminded.