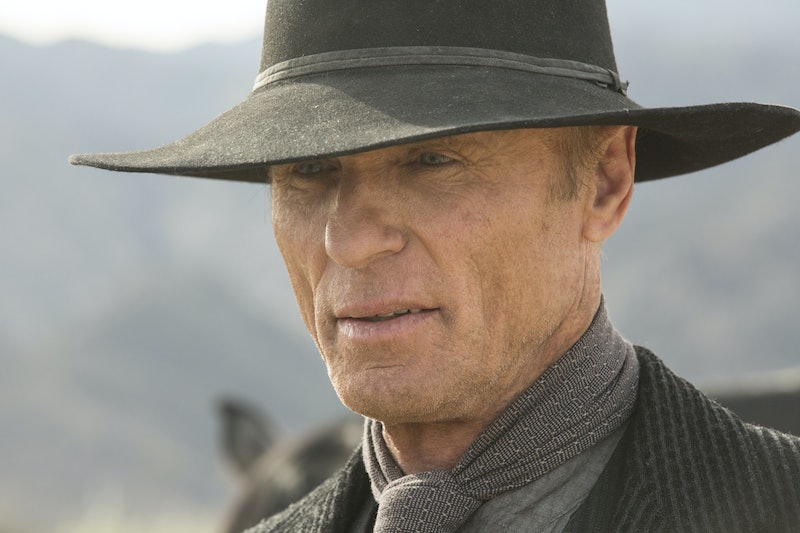 With only two episodes to go in its freshman season, HBO's Westworld is slowly and surely starting to dole out information on some of its core mysteries. First, we learned that soft-spoken programmer Bernard is a host created by Dr. Ford (and who killed both Theresa and apparently Elsie on Ford's orders); then we seemingly got answers about the popular dual timelines Westworld theory (thanks to the knowledge that hosts remember things with perfect clarity); and finally we got our first real information about the Man In Black's history (when the dark-clad guest opened up to Teddy about his family). But did this backstory help to prove or disprove the theory that kind-hearted guest William is the Man In Black?

Before the events of "Trace Decay," all we knew about the Man In Black was that he's apparently a famous figure outside of Westworld, a wealthy man who operates some sort of foundation that likely involves advances in medicine — since another guest who encountered the Man In Black thanked him for saving his sister's life. The Man In Black's backstory got a major upgrade this past week when the mysterious character indulged in a lengthy monologue about his past… and it sounded like a far cry from the William that we know.

The Man In Black revealed to Teddy (and the audience) that his wife had "accidentally" died when she took the wrong pills and fell asleep in the bathtub. However, the Man's daughter believed that her mother committed suicide due to her father's emotional abuse and neglect, and refused to speak to him ever again. So when he came back to Westworld, the first thing he did was seek out some innocent hosts — Maeve and her daughter — and murder them in cold-blood to see if he felt anything. (He didn't, but Maeve's extreme suffering is what sent him on his current quest to find the maze and awaken the hosts' dormant humanity.)

While that dark and depressing story may sound like a far cry from the idealistic white-clad William that we know and love… but in my opinion, the Man In Black's backstory confirms his connection to William rather than debunks it. First of all, there's the heavy focus on the Man In Black's wife, when one of the few things we know about William's life outside of Westworld is that he has a fiancée waiting for him. Granted, the fact that both men have spouses is far from a smoking gun, but there is other evidence that points to a connection as well.

In telling his story, the Man In Black references his "30 years of marriage" to his deceased wife — which is exactly the amount of time that has elapsed since the last "critical failure" at the park, and when many viewers theorize William's storyline is taking place. If William got married soon after leaving Westworld, and the Man In Black's wife died relatively recently, then the timing works out perfectly.

Then there's William himself, who seems to be edging gradually closer and closer to the Man In Black's nihilistic attitude every episode. Ever since he first took a life back during that ill-fated nitroglycerin robbery, William has seemed more willing to view the hosts (or at least the hosts that aren't Dolores) as dispensable. He was perfectly willing to let that injured soldier die last week — and maybe even helped the young host on his way, depending on what you think happened while Dolores' back was turned.

Finally, there's the presence of the second person listening to the Man In Black's tragic backstory, other than Teddy; the conversation is also overheard by Angela, the host who turns out to be a member of Wyatt's posse. When he first saw her, the Man In Black commented that he was surprised Angela hadn't been "retired" yet, implying that they'd met before — and a long time ago, to boot. If Angela looks familiar, there's good reason: she's the same host that greeted William when he first arrived at Westworld with Logan and helped him pick out his outfit and accessories.

When you put it all together — the Man In Black's story about his wife, his remarks on how much time has passed, William's own actions, and the fact that the Man In Black recognized the host that introduced William to the park — it seems like the closest we've come so far to confirmation that William and the Man In Black are indeed the same person. At this point, either the two characters are the same… or the writers are working overtime to make us think they're the same. Considering there are only two episodes left this season, we're bound to find out soon.