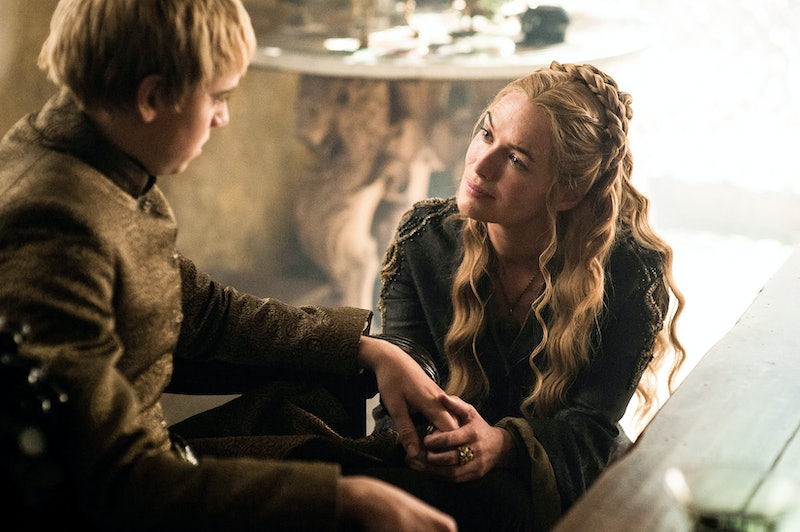 The holiday season means lots of family time for most people. There's arguments about politics between you and your uncle, constant questions about your love life from your grandparents, and your parents are still comparing you to that one cousin who went to med school and still got her law degree just because — it's enough to make anyone hide in the bathroom with a glass of eggnog and a plate of holiday cookies. However weird you think your family is though, take heart in knowing your family is nowhere near as dysfunctional as the families on Game of Thrones .

I am not just talking about the Lannisters here either. From the beloved Starks straight through to the Tarlys, the Game of Thrones ' families are all hot messes. If they celebrated holidays in Westeros it would be a literal bloodbath every single time. Can you imagine being in charge of the seating chart for a Barartheon wedding? Just the thought gives me hives.

Your family may be quirky and exhausting, but give all of your loved ones an extra hug this holiday season anyway because at least you know none of them will ever send a shadow baby to murder you in the dead of night.

I'll take things you don't do with your brother unless your last name is a Lannister for $200, Alex.

2. Ned Stark Teaches His Kids The Fine Art Of Execution

Fatherly advice is great, but it would be a little worrying if your dad taught you the finer points of executing someone over dinner.

3. Stannis & His Obsession With Sacrificing Family Members To R'hllor

First he dispatched a shadow baby to kill his brother, then he attempted to use his nephew as a blood sacrifice, before ultimately burning his daughter alive in hopes of improving his chances of being king. Stannis is the one true nightmare relative.

Randyll not only threatened Sam with death if he did not leave his house, he stripped him of his birthright and treated him with contempt when he came by for a visit — and Sam is amazing. When it comes to dysfunction, Randyll is the champ.

5. Viserys Trades Dany To The Dothraki

I don't care that Dany fell in love with Khal Drogo eventually, brothers do not trade their sisters for armies. I feel like that should not have to be said.

6. Everything Tywin Lannister Ever Did

Tywin's twisted manipulations of his children led to an insane rivalry between Cersei and Tyrion, set Jaime up for failure, and created an environment where all three of his children fought over even the smallest scrap of his love. The next time you think your family is bad, just remember you are not related to Tywin, and be grateful you were not saddled with a monstrous patriarch.

7. Joffrey Has All Of His Half-Siblings Murdered

At least you can sit next to your half-brother or stepsister without wondering if they have issued an executive order to have you killed.

Maybe the Mad King would not have been so mad if his family did not continuously marry only other Targaryens. I'm just saying, the whole keeping the bloodline pure argument has never worked out for anyone.

Every family has secrets — like the time you swore to your mom you would not tell anyone she dropped the turkey on the floor and served it anyway — but Ned raising Jon as his own son without ever divulging he was actually Jon's uncle is a pretty big one. By not telling his wife, Ned also ensured Jon would live a life full of identity issues, shame, and being banished during family events.

Normally, having a family member you haven't seen in a long time visit is cause for celebration. If that family member is Euron you might want to hire a few bodyguards. First the guy murdered his brother and then he went after his niece and nephew — I think they all would have preferred lame souvenirs from his time at sea, to be honest.

I don't normally feel sorry for Cersei, but just imagine if your husband spent all of his time pining over his dead girlfriend. Poor Tommen and Myrcella must have been so confused.

12. The Overpopulation Of House Frey

Walder Frey has so many children, he literally has forgotten most of their names. Trying to have dinner at The Twins is probably a bloodbath even when Walder isn't hosting the Red Wedding.

Roose indulged his insane son (and probably taught him how to torture people) and then Ramsay murdered him. Ah, family.

Every family has it quirks, but admit it, compared to the families of Westeros, your family is the best.