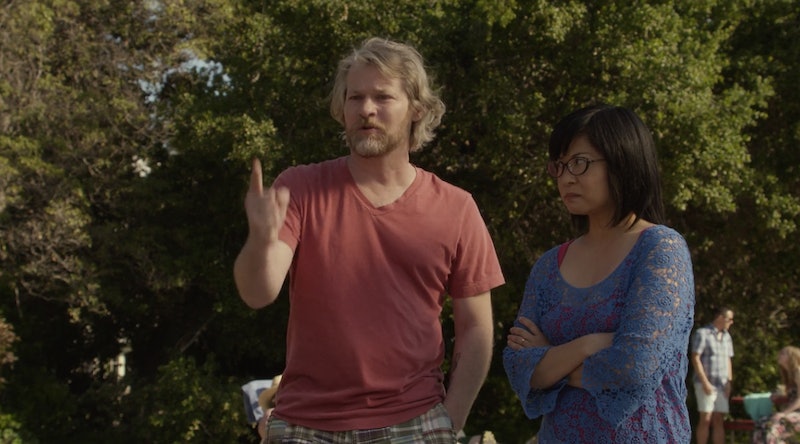 When we last looked at the fate of Hep Alien, hopes weren't high for a reunion: Zach was out touring as a guitarist for a different band, leaving Lane to stay home with their two infants. News of the Gilmore Girls revival placed hope that the band could get back together, despite reasonable fear that Lane and Zach would nerd out after years of marriage, not to mention the financial toll of raising twins (unless they can score a gazillion scholarships college isn't going to pay for itself). The good news is that Hep Alien is still rocking in Stars Hollow... the bad news is that Zach has a real job now. But what is it, exactly, if not "professional musician."

When Rory runs into Lane in "Winter" and asks what's up, Lane is quick to lament this reality. "Ugh, you don't want to know. Zach got a promotion" adding she's frustrated and she "thinks they like him." Rough, babe. "He's a route supervisor now, has to wear a tie, it's fairly devastating," She says. "I tell him he looks like a young Leonard Cohen but really he just looks like his dad." Pause for laughs. So on a base level, that answers our question to what Zach's been up to, but what exactly is a route supervisor? Like, what is it beyond being a nebulous desk job?

In layman's terms, a route supervisor oversees delivery mobiles and to ensure the successful transfer of a product (like say, for example, they would oversee a cornstarch company dropping off their wares at Doose's market). Beyond that, a route supervisor typically, trains, hires, and does routine performance reviews with their drivers. In short, it's the sort of management position that doesn't require a college degree, but you do often need a commercial drivers license. So overall, it seems like a realistic gig for Lane's lovable yet certainly not brilliant husband.

Even though Lane declares the whole thing "fairly devastating," he's certainly not the least successful Hep Alien member. Is Brian staying in the Zach and Lane's spare room sporadically? Dark. Likewise, Sebastian Bach is still Sebastian Bach and Lane seems pretty stay-at-home-y despite her Punky Brewster threads. I do wonder where Dave Rygalski is after all this times, it seemed like California worked out well for him.

Still, being a quasi-cooperate drone definitely drains Zach, who can't wait to rip off his button down before Hep Alien jam sessions. And while "Summer" sees him and Lane still performing at the Secret Bar, it's fair to say that this new promotion could botch the band going really, really big. Sigh. Music just isn't what it used to be.