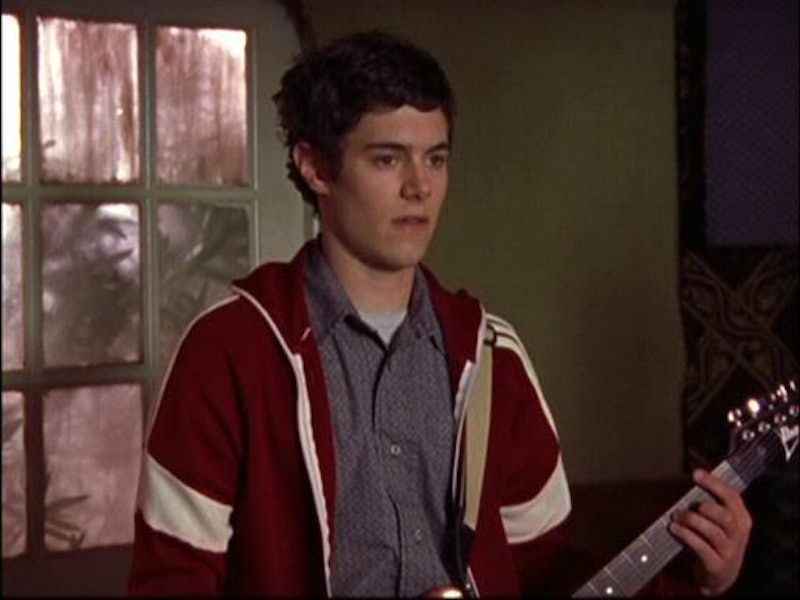 Stars Hollow is going to be full of familiar faces when the Gilmore Girls Netflix revival premieres. Everyone from Lorelai to Miss Patty to Paul Anka the dog is returning, and fans could not possibly be more psyched. Well, maybe they could be slightly more psyched if Lane's ex Dave Rygalski joined the revival. Sadly, everyone's fave '00s boyfriend, Adam Brody, has not joined the revival, and I don't think there are any plans for him to get on-board. But wouldn't it be great if he did?

The last time Dave was seen on the show, it was the end of Season 3 and he adorably read the entire Bible to convince Mrs. Kim to let him take Lane to the prom. It was easily one of the show's most romantic moments, but then Dave went to college in California (ahem, The O.C.) and shortly afterwards he and Lane broke up. Even though Lane is with Zack and there is zero hope of a romantic reunion, it would be nice to see the best first serious boyfriend in television history (I will forever stand by that statement) return to Stars Hollow one more time.

1. Hep Alien Needs To Rock Out With The Entire Band

Hep Alien can be divided into the Dave years and the Gil years, but never have those two eras met. That needs to change. I know Zack thinks people never come back from California, but surely Dave would be up for dropping by for a reunion with his old bandmates.

Lane and Dave were so young when they broke up, but they were each other's first loves and that is a special connection. It would be so sweet to see them compare notes on how their lives have turned out.

3. The World Needs To Know If He Married A Girl Named Summer

Hey, the revival is already staging mini Bunheads and Parenthood reunions, why not add The O.C. to the mix?

4. Dave Was The Most Romantic Gilmore Girls Character Ever

If Dave did return, he wouldn't have anyone to woo unless he suddenly fell in love with April, but I bet he would sneak in something romantic anyway. This is the man who read the entire Bible in one night. He is a romance machine.

Of all Lane's boyfriends, Mrs. Kim was closest to Dave. She even wanted to send him the marriage jug that was not a marriage jug. I would love to see her tease him one more time.

6. Dave Needs To Meet The Twins

Before Lane and Dave were a couple, Dave and Zack were friends. He should meet the family because without him, Zack and Lane never would have met. Plus, seeing the twins torment Dave would be so much fun.

7. Dave Could Be Lane's Pennilyn Lott

What if Dave and Lane have called each other once a year since their breakup just to check in? BRB, I'm dying from emotions.

8. His Humor Was Always On Point

Sure, Stars Hollow is lousy with funny people, but Dave had his own special brand of humor. The mix of sarcasm and self-deprecation have been missed.

9. Fans Need To Know What He Is Listening To Now

Dave's taste in music was matched only by Lane's. After all, he read almost her entire ad which may have featured every band in the history of time. Who is Dave into now? The world needs to know.

Aside from Sookie, who I will hold out hope for until the final credits role, everyone is coming back for the revival. If you can name a minor character, they have likely signed up. Dave is a special part of the Gilmore Girls' history and it only seems right for him to return.

11. Because It Would Mean More Lane Time

The more story there is for Lane, the better. That's just a fact.

The campaign to bring back Dave starts here, guys. Who is with me?