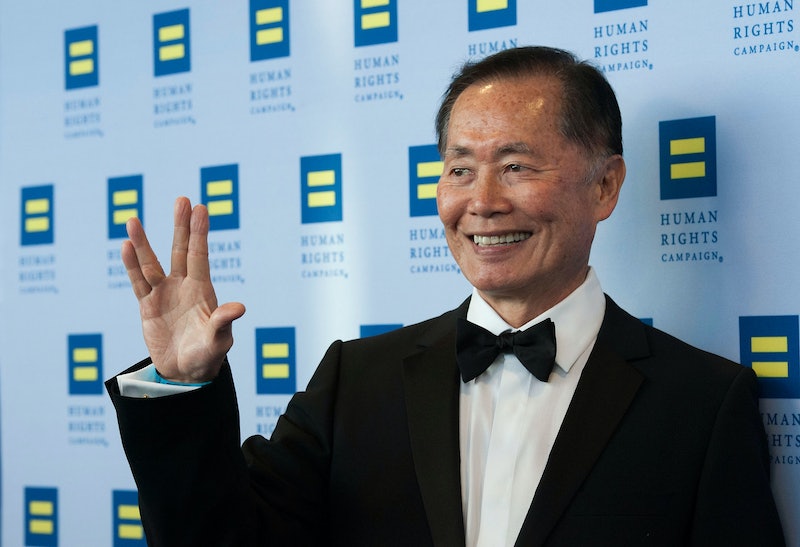 Fun fact: The first episode of Saturday Night Live premiered on October 11, 1975. Another fun fact: Saturday Night Live has only had two hosts of Asian descent in the 39 year span of time between then and now. In his open letter on The Huffington Post, George Takei has announced that he's in talks with SNL to become the third, and that's one bit of comedy news that we're hoping isn't a joke. Especially since Takei mentions the "rather awkward void in representation that [he hopes] to fill."

That said, his blog was published on April Fools' Day. We can't be sure he's serious or not, but we sure hope he is.

Because he entire situation over at SNL is already enough of a joke: A show that made a punchline out of the fact that they hadn't had a black female cast member since Maya Rudolph left in 2007 and then made headlines for finally hiring Sasheer Zamata to replace her isn't exactly diversity's greatest champion. Exactly how long would SNL have gone without a black female on the cast if there hadn't been that controversy? And exactly why is it still news when one is hired? The thing about the diversity issue is that it's an issue that requires an admission of guilt on both sides: that SNL assumed no one would notice for six years and that they were basically right.

Worse, the diversity battle is an ongoing war between the media and the audience because it doesn't stop with the representation of just one minority group. Zamata brings the number of black comedians on the cast up to three and the number of females up to seven, but there's still a complete lack of cast members of Asian descent. And as anyone who has ever watched Comedy Central Presents can tell you, it's not that comedians of a certain minority group aren't ready as Kenan Thompson memorably said about black female comedians. It's that the diversity battle is treated by Hollywood as a scrape on the knee that can be fixed with a simple smiley face band-aid and SNL has kissed the boo-boo and called it a day with the hiring of Zamata.

Zamata's addition to the cast was a victory for people of African American descent, but other minority groups have their own comedic stylings that SNL seems in no hurry to benefit from. While Jackie Chan and Lucy Liu have been hosts, and Takei may be next, SNL has never had an Asian female as a cast member (Fred Amerisan is part Japanese.) Asian representation on TV has been hitting an all-time low recently and letting shows like SNL think that they've placated their viewership is the reason we reach the point of having these diversity controversies. The battle for representation shouldn't stop just because one issue has been fixed for now, or it undermines the entire movement.