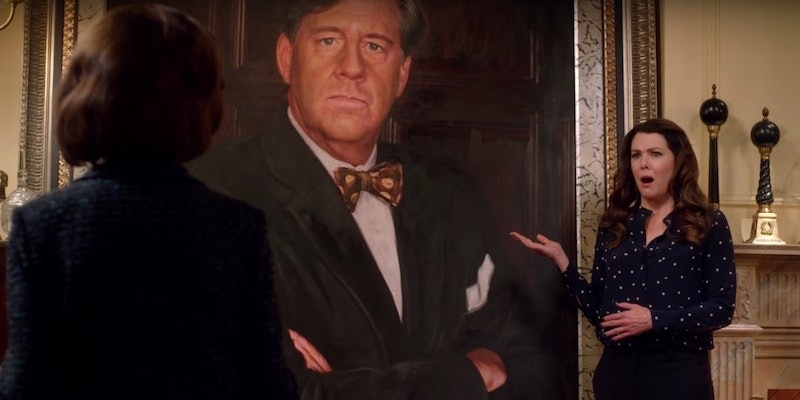 Gilmore Girls fans were devastated when the actor who played Richard Gilmore, Edward Hermann, passed away of cancer in 2014. Unsurprisingly, Netflix's new revival series incorporates the actor's death by stating that Richard has died, and the new episodes feature the Gilmore women dealing with loss of the family patriarch. There's even a huge portrait of the larger-than-life Richard taking residence in Emily's home, and in many of the scenes which take place there, the portrait is creeping in the background, reminding us all of the character, and actor's, passing.

While the portrait is a little overwhelming due to its grandiose size — it's so big that, Lorelai jokes, "Peter Jackson could hang it at the Argonath" — it does make an important point. The Gilmore women may be without Richard in the series, but his presence is always in the background, both literally and figuratively, impacting the ladies and how they see live their lives. Emily and Lorelai, specifically, have some pretty serious issues to work through, and without Richard to back Emily up or be somewhat of a voice of reason between the two, the women seem to be at a loss when it comes to getting along.

Yet as viewers learn in "Winter," the larger-than-life portrait has its imperfections, too. In the first scene featuring Emily in the revival, she is joined by the Lorelais for the time-honored tradition of Friday night dinner. When she invites the girls for some martinis at the dining room liquor cart, they are both shocked by the wall-covering painting of Richard Gilmore. As with many Lorelai and Emily interactions regarding Richard (and pretty much everything), this one doesn't go on without a fight. Lorelai correctly but perhaps not kindly latches on to the fact that her mother "spinal tapped the painting" by giving the painters the "wrong dimensions" and is now "trying to pretend that that massive portrait is something [Emily] actually intended."

At first, Emily denies all and argues that she did intend "for dad's eyebrow and my [Lorelai] forearm to be exactly the same length." But then she has a bit of a meltdown, snapping at Lorelai, "Fine, I made a mistake are you happy? I gave them the wrong dimensions and they screwed it up. I'm a screw-up, I admit. Just please, don't let this be the only thing you remember to say at my funeral." It's a truly tough speech to watch.

Even after this blow-up, the portrait continues to pop up in the background because of its central Gilmore household location. The painting can be seen from the dining room, so it is present during all meals and many other scenes in the Gilmore mansion, reminding viewers of Richard's loss — but also his continued presence in the lives of his relatives. Take the events of "Fall," for instance, when the portrait proves to have some sentimental value for Rory as she prepares to draft her biographic novel. She walks into the Gilmores' mostly-abandoned-for-Nantucket mansion and goes straight to the portrait, giving it a good ole stare-down before wandering around the house, remembering different moments with her grandparents. It's a moving scene, and a reminder of all the wonderful moments shared with Richard in his home.

So be wary, guys, because every time a Year In The Life happens to stumble upon the painting of Richard, you may or may not start tearing up. Honestly, the revival really should have given us some sort of doctor's warning to stay hydrated before we all began watching, because I personally lost so much water while watching this show.