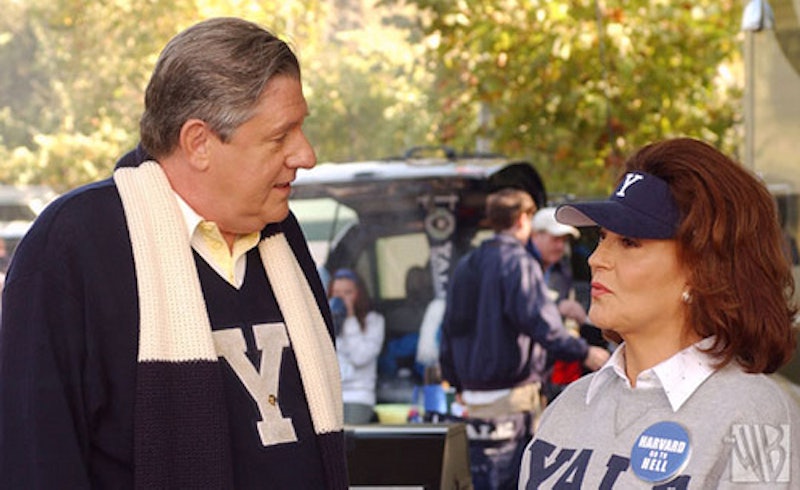 Trying to pick your favorite Gilmore Girls episode can sometimes feel like the Sophie’s Choice of your television woes. There’s just too much wonderfulness to choose from. But if you had to narrow it down, there are a select few episodes that stand out far above the rest — one being the flashback episode where Lorelai gives birth to Rory. The problem is trying to recall when exactly this episode takes place without having to scour through all seven seasons. (I mean, our Gilmore encyclopedia knowledge may be good, but not that good.) Luckily, you need not look further than this very page. In other words, where you read, information will follow. (Get it?) Anyway, the episode, which is aptly titled “Dear Emily and Richard,” can be found in Season 3, Episode 13. But what makes this such a must-see event, you may ask?

Well, not only do we get to see a young, just-as-witty version of the Lorelai we know and love, but we’re also given a firsthand account to the events that led to Lorelai's big Stars Hollow move. Sure, we’ve heard the story plenty of times — how Lorelai didn’t want to live under the thumb of her folks' high-society lifestyle, etc. But this episode allows the audience to actually see it all come to pass and understand both sides of the story.

It was always easy to paint Richard and Emily Gilmore as the villains trying to entrap their daughter into a life that she hated. However, “Dear Emily and Richard” proves that no matter how poorly they went about handling a teenage pregnancy, they genuinely loved their daughter and were simply trying to do what they thought was best back then. Were they disappointed? Yes. But when Christopher’s parents tried to shove the blame entirely on Lorelai, they had her back. After all, many of us are probably familiar with the strain a generational gap can have on a family dynamic, but that doesn’t mean you don’t still love each other.

So while Emily and Richard certainly had their fair share of flaws, they were actually pretty awesome parents — a fact that I think this episode only helps to enhance. In honor of that, let’s take a look back at all the times this Gilmore matriarch and patriarch made us love them almost as much as Lorelai. Consider yourself Gilmored.

When They Embraced Modern Technology

On More Than One Occasion

When They Saw Lorelai Graduate

When Emily Busted a Move

When They Mistook a Band for a Type of Drug

Which actually isn't that far off. LOL.

When They Spoke Candidly About Alcohol Intake

When They Came to Their Daughter's Defense

When They Threw Shade at the Huntzbergers

When They Praised Lorelai's Parenting Skills

When They Shared Their Thoughts on Television

And Finally, When Their Love Made Us Weep