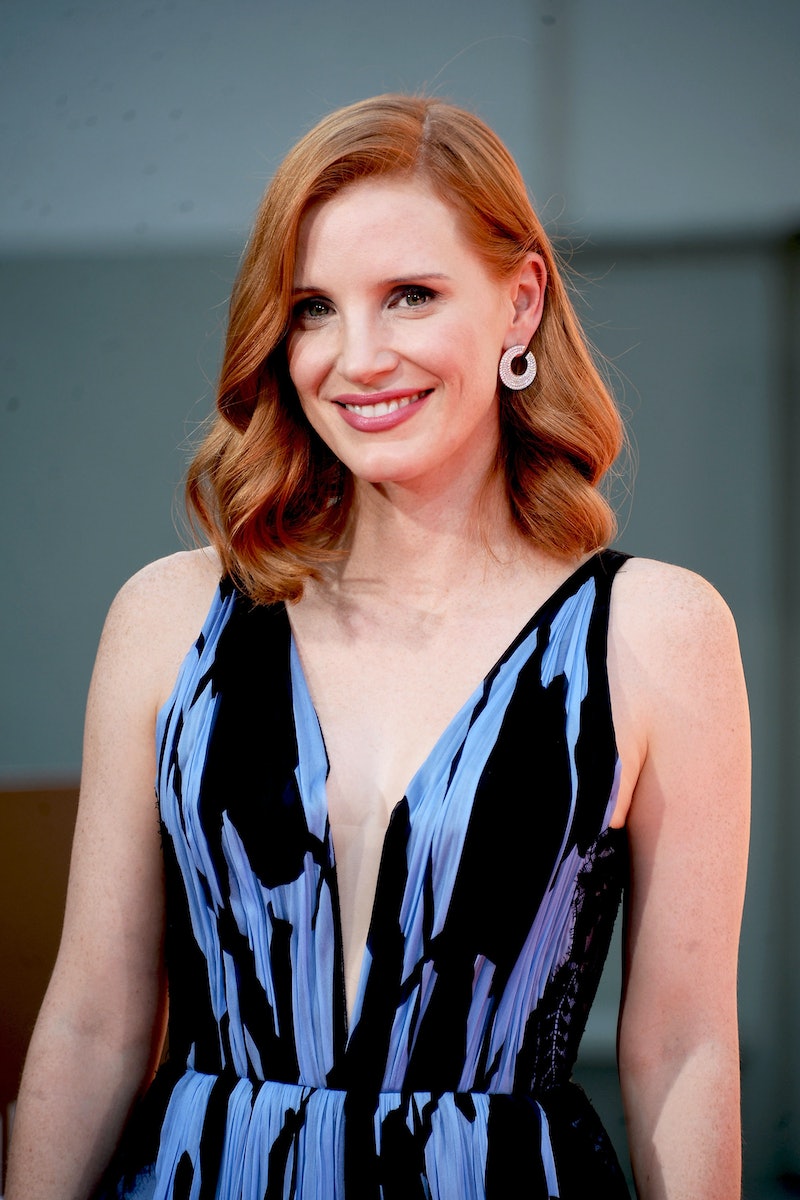 It might feel like ancient history now, but it was only a little over a month ago that Donald Trump took the stage at the third presidential debate, glanced over at Hillary Clinton, and muttered the statement that'd come to define the tail end of the 2016 election: "Such a nasty woman." In the weeks since the phrase was uttered, it's become (and remained) nothing short of a battle cry for Clinton supporters, women who've taken the derogatory connotations behind the words and turned them into points of pride, markers of ambition, preparation, and drive. Still, not everyone is on-board with the repurposed phrase; as the results of the election sadly showed, America would still prefer an ill-equipped man than a nasty woman in the country's highest office. But for the actor Jessica Chastain, an avid Clinton supporter and self-proclaimed feminist, the candidate's loss doesn't mean that the message shared by her supporters has to be lost, too.

"I’m a nasty woman. I’m proud to be a nasty woman," Chastain tells me, the morning after she arrived at her New York home for a quick Thanksgiving celebration. "It’s a strange thing to say, but I’m not going to let someone make me feel bad for succeeding and using my power."

In the time since Trump's win, countless people have looked back at the election and wondered if things could've been different. Would Clinton have won if she were less zealous, less fierce, less herself? It's hard to say, but Chastain — whose new film, Miss Sloane , features a protagonist who's every bit as "nasty" as Clinton and the star herself — has no patience for those who choose to see those qualities as flaws.

"You hear of a woman showing that she cares and that she worked hard, having ambition, wanting to do her job well — it’s not something that typically we celebrate in our society," Chastain says. "Women like that are labeled as difficult or as ice queens or almost anti-women."

And it's time for the push for women to be kinder or gentler or more "feminine" to end, she adds. Says the star, "We’re all participating in writing the role of what a woman is supposed to be, and I don’t think it’s accurate."

In Miss Sloane, now playing in select theaters and opening nationwide on Dec. 9, Chastain plays a high-powered D.C. lobbyist whose determination to win no matter the cost is both the key to her professional success and the downfall of her personal relationships. Elizabeth Sloane is as "nasty" as it gets, a woman who's constantly one step ahead of her opponent and doesn't play her trump card until she knows it'll hurt the most. She's an ice queen, yes — but what makes the film so interesting is that it doesn't view that as a problem. Elizabeth's ruthlessness has made her a star in the Washington political world, a player liked by few, but respected by all.

"We’re all participating in writing the role of what a woman is supposed to be, and I don’t think it’s accurate."

"I was very, very happy to play a character like Elizabeth and show that yes, you can be ambitious, you can be over-prepared, you can be all these things that men have been in the past, and we can still root for that kind of character to succeed," Chastain says. "I like women in my life who [are like that], and I like to go to movies where there’s representation of women stepping outside of their expected roles in society."

When Chastain first signed on to Miss Sloane, it was the film's controversial subject matter — the plot hinges around Elizabeth's fight to get a strict gun control bill passed into law — that caught her attention. But soon, she says, she was drawn to its reversal of the gender politics so commonplace in pop culture.

"Usually in film, when you see a female lead character who’s championing something, it’s something that has to do with being female," Chastain explains. "It’s inherently a female movie, a female issue." But with Miss Sloane, she says, "I was really excited to see a successful female working in politics that was championing an issue that wasn’t gender specific."

In fact, Miss Sloane reverses pretty much every norm when it comes to the portrayal of women on-screen. There's the relationship between Elizabeth and Esme (Gugu Mbatha-Raw), a bond that's intense and complex, yes, but not filled with the cliched competitiveness so often seen between female co-workers in film; the absence of a tragic backstory or failed romance in order to make Elizabeth's ferocity more "understandable"; and, most of all, the character's total lack of apology about the way she is or the success she's found. Elizabeth is proud of her ambition, and she has unwavering confidence in her abilities, despite criticism from practically everyone around her.

"In our society, if a woman steps forward, she’s frowned upon."

For Chastain, and likely for so many other women, Elizabeth's drive is inspiring. "[When we] talk about the wage gap, for so much it’s been about, OK, why aren’t men paying women equally? But then you have to look at it and go, OK, it’s because women aren’t asking for more. That’s what data’s showing. Women don’t ask for promotions and they don’t ask for pay raises. Why is that? It’s because in our society, if a woman steps forward, she’s frowned upon."

"So," she continues, "I think we just have to look at ourselves and how we’re fitting into society and say OK, let’s step forward, let’s ask for pay raises, let’s ask for promotions, let’s get what we deserve, and let’s not ridicule other women for showing up prepared."