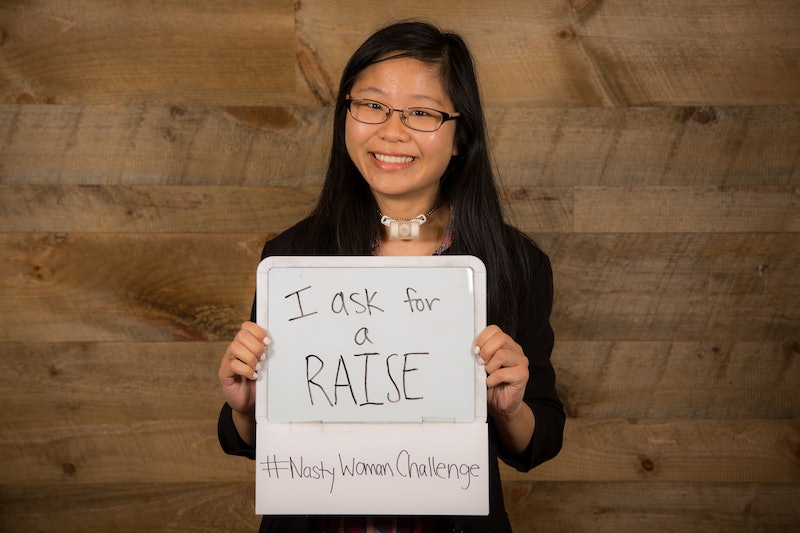 Of all the questionable things known name-caller Donald Trump has called Hillary Clinton — including but not limited to "crooked," "puppet," and "the devil" — perhaps the most resonant happened during Wednesday night's third presidential debate. "Such a nasty woman," said Trump, interrupting Clinton during her discussion of social security plans. Unsurprisingly, the judgment of the Twitter gods was swift, and within minutes the words became not an insult, but a rallying cry. If Trump thinks women who fight for what they believe in and don't take crap from fools like him are nasty, then nastiness should be worn like a badge of honor.

So, fellow women of the internet: wanna let Trump know exactly what you think of his words, while also helping out other women? Then take the #NastyWomanChallenge by posting what makes you a ~nasty woman~, either by sharing a picture of yourself with the words written on a piece of paper, or sharing a video of yourself saying it out loud. Don't forget to add the hashtag when you put it on your social media.

Much like the Ice Bucket Challenge of yore, once you post you can challenge three friends to do the same within 24 hours. Don't feel like airing all your nasty woman laundry on the internet? Instead, contribute a five dollar donation to RAINN, the nation's largest anti-sexual violence organization. Or if you're feeling especially nasty, post your story for the challenge to spread awareness AND donate.

Need some inspo for what you're going to share? We rounded up some nasty women here at the Bustle office to share exactly what makes them worthy of the #NastyWomanChallenge.

It is unsurprising that estimates show that only 15.8 to 35 percent of rapes are reported when people like Trump's alleged victims of sexual assault are constantly accused of only coming forward for the attention, and have come under fire for their claims by people who do not believe them. It is by no means the responsibility of women to feel obligated to speak out about something so personal — but hopefully, nasty women will be able to make a world where women don't have to fear doing just that.

Guys, manspreading on public transport can be documented as early as 1918, and you know cave dudes were spreading their limbs everywhere during cave days, too. We've gotten to the point when men are straight up ignoring transit ads campaigning against manspreading — the time to nastily plant ourselves in space we deserve is NOW.

Cat-calling is among the most notorious and upsetting ways that men create toxic atmospheres for women in public spaces, making crude comments to get a rise out of women or make them feel uncomfortable. While there is nothing wrong with staying silent, many women feel obligated to do so — when truly, women owe catcallers no amount of respect, and should feel free to nastily call them out on their behavior whatever way they damn well please.

Not-so-fun fact: The wage gap is alive and well, as Hillary Clinton has brought up in all three presidential debates in 2016. Women still make 77 cents on dollar to men (even less for women of color!), and it's not because women aren't asking for more — a new study revealed that women ask for raises with just as much frequency as men. But nasty women are still out there fighting the good fight and closing that gap, y'all.

Trolls are a sad brand of human, and among their favorite targets are women who (gasp) have opinions on the internet. Nasty women know how to handle trolls — whether it's ignoring them, or trolling the trolls right on back.

Both state and federal laws protect employees from sexual harassment in the workplace, but all too often legitimate claims are not made or dismissed — not only compromising women's ability to feel safe in public spaces, but compromising their ability to grow and flourish in their professional careers. One of the allegations made against Trump in the last week involves a People writer he worked with in a professional capacity; in other instances, he has made sexist comments on his business reality show The Apprentice, including telling a former contestant, "It must be a pretty picture, you dropping to your knees." In the face of this blatant type of workplace harassment getting aired out in a national election, it is all the more necessary for nasty women to speak out about it now than ever.

ALL HAIL WONKS FOR HILLARY, and every other woman who has had the nastiness to call men out on their sh*t — whether those men are condescending, mansplaining, or straight up telling lies. Hillary's team (as well as, y'know, all of Twitter) has been diligently fact-checking throughout this election cycle, because there is no feeling quite as satisfying as having the receipts.

Personal space is just that, yo — PERSONAL. So whether you're getting inappropriately crowded on public transport or weirdly hovered over by a six-foot-something orange man in a live, television 90-minute debate, you are more than entitled to assert your right to your physical space, loud and proud (and, of course, #nasty).

The epitome of being a ~nasty woman~? Having opinions, and not apologizing for them. In this veritable garbage fire of an election, it is totally excusable to take a vacay from social media until Nov. 9 (a lot of nasty women do), but it is a powerful kind of nasty indeed to stand up for what you believe in — even if friends and fam aren't always on the same page.

Taking a look at this map of what the election would look like if women couldn't vote — you know, that one that inspired a bunch of angry Trump supporters to tweet #RepealThe19th?

In the words of Beyoncé, "WHO RUN THIS MOTHER?"

Don't forget to nominate your friends for the #NastyWomanChallenge, and donate to RAINN on their website here.