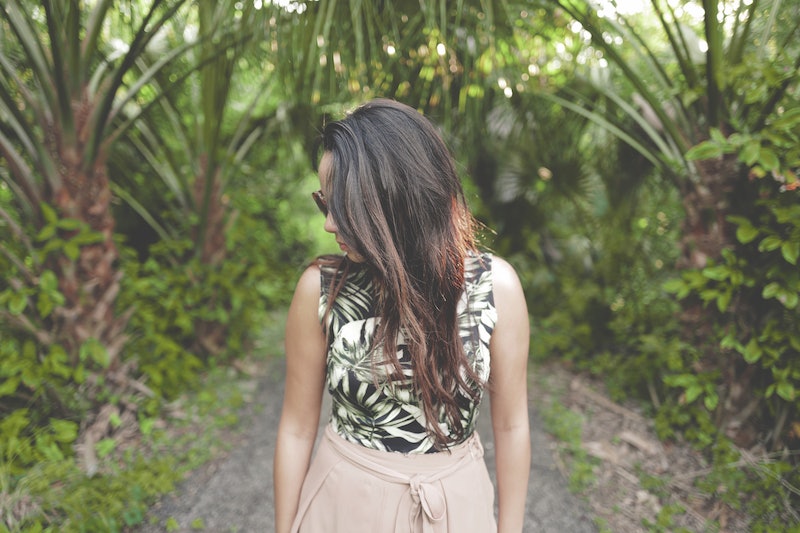 It's one of the most taboo subjects in women's health, but speaking frankly about abortion is necessary if we want to provide women with all the information they need to make sound decisions about their bodies and health. Even though there are already a lot of conversations happening in our society around a woman's right to terminate her pregnancy, it's also important to consider the more clinical side of things. That means understanding the medical details of what having an abortion actually entails.

Unfortunately, due to the stifling stigma around abortion, most of us haven't been educated properly about the details of terminating pregnancy. We often aren't taught anything in health class about it, and we're discouraged from asking any questions about it when we're young. As a result, we only gather certain nuggets of information and take it as gospel, even if that information doesn't come from a reliable source.

Bustle spoke with Alyssa Dweck, M.D., a gynecologist in New York, assistant clinical professor OBGYN, and author of V is for Vagina, in order to find out more. Dweck says that women can be "very uncomfortable with what they’re going to expect" from an abortion, and says it's important to learn as much as you can about the procedure.

There are many horror stories out there about what can go wrong when terminating pregnancy. We've heard about everything from deadly infections to an inability to conceive again. Dr. Dweck assures that abortions done in a controlled setting rarely result in abnormal bleeding, infections, or any other issues that might have a lasting effect on the body. Furthermore, when the procedure is done by a trained professional, the death rate is less than .01 percent.

Having an abortion in the first trimester is actually one of the safest procedures you can have done in our healthcare system. The complication rate is less than .05 percent. In fact, having a standard colonoscopy is 40 times more dangerous than terminating pregnancy. Even abortions that are done later in the pregnancy are considered extremely safe (in fact, in most cases, safer than giving birth). The real time anyone should be nervous about getting an abortion is when it's done in an underground facility that isn't run by accredited medical providers.

They Think All Doctors Won't Perform Abortions After A Certain Point

We've heard all kinds of different things about how far along in a pregnancy a doctor will refuse to terminate. Some say eight weeks is the cutoff point, while others say 12 weeks. "There is no hard and fast rule," Dr. Dweck tells Bustle. "Some doctors just have a personal feeling that after a certain period of time it’s inappropriate." That's why you'll run into practitioners who won't perform abortions at all, because they simply don't feel comfortable with it.

You'll never know how your doctor operates until you speak to them and ask the necessary questions. Just because you heard from a friend that their provider won't terminate a pregnancy after 10 weeks, doesn't mean yours won't. Speak to them before you make any assumptions. If your provider chooses not move forward as you make this decision, you have every right to seek out a professional who will.

That said, keep in mind that every state has its own abortion restrictions. For example, 26 states have made abortions between 24 and 26 weeks unlawful, and eight states have made it illegal to have an abortion after 22 weeks. Look at where your home state falls, because unfortunately some women have to travel to surrounding states to terminate their pregnancy.

There's also been a lot of confusion about late-term abortions and what that term actually means. Performed at 20 weeks or later, these make up less than one percent of all abortions, and it's a two or three-day long procedure that's performed once the patient is admitted into a hospital. A woman can only qualify for a late-term abortion if she or the fetus's physical health is at a high risk, or if she is at risk of losing her life. In other words, late-term abortions only take place due to medical emergencies.

"In general, especially early on in the first trimester, there are usually two ways to do abortions early on,” Dr. Dweck says, even though many of us were taught that a surgical procedure is the only way. The other option is the medical abortion, which consists of a woman taking a pill prescribed by her doctor in the comfort of her own home, which results in the embryo exiting the body vaginally. You experience heavy bleeding and some cramping during the process.

This way of ending pregnancy is quite common these days. Dr. Dweck even says surgical abortions "have become less common with the progress of the medical pill." Thirty-six percent of abortions in the U.S. that are done in the first nine weeks of pregnancy are performed medically. However, Dr. Dweck says there are still many women who opt in for the surgical route, only because they're not exactly sure when the bleeding will happen or when the cramping will hit with the medical pill. With a surgical procedure, you can at least know exactly when and where it's going to take place. Both methods of abortion are equally safe, though.

According to Dr. Dweck, this is one of the biggest questions women have when they're getting ready to take the medical pill. They worry whether they will see any human tissue or any other similar remnants flushed out of their vagina. She assures this is not the case at all, though. "Most of the time what occurs only seems like a heavy period that can be crampy and uncomfortable," she says. So don't worry, there won't be any kind of residue that resembles a fetus. Grabbing a heating pad and simply resting your body can go a long way.

Thinking you'll be infertile because you end a pregnancy is a pretty common myth in our society. Sadly enough, some of us are told this when we're younger in an attempt to scare us off from getting the procedure done at all. "The truth of the matter is early abortions that go without complications should be no problem with subsequent pregnancy," Dr. Dweck insists.

Dr. Dweck does point out that, just like with any other cervical procedure, if your cervix is dilated many times with the surgical abortion, your cervix could weaken and compromise future pregnancy and delivery. However, this is only something to think about if you've if you've had repetitive procedures. Additionally, the risk of infection exists, and "any overwhelming and untreated infection might impair fertility for the future," Dr. Dweck says. This is an extremely rare occurrence, though, and she says a lot of these stories have been passed down to us from the distant past when abortions were illegal and they were being performed in dodgy settings.

They Think Emergency Contraceptive Pills Are The Same As Abortion Pills

Dr. Dweck says she has seen many people mistakenly think of post-coital emergency contraceptive pills, such a Plan B, as just another form of the abortion pill, which is the medical abortion. Plan B is a hormonal contraceptive that works by preventing a fertilized egg from implantation and therefore preventing pregnancy. It doesn't cause the uterus to contract like the abortion pill does, and therefore doesn't affect an already existing pregnancy. The morning after pill is taken up to 72 hours after unprotected sex, but the abortion pill is taken up to 70 days after the first day of the missed period.

They Think It Takes A Long Time To Physically Recover

It will be different for every woman, but Dr. Dweck tells Bustle it usually takes a couple days to physically recuperate from the procedure, even if you have had anesthesia for the surgical abortion. Granted, your hormones will fluctuate and you may need some more time to emotionally recover, but don't think you will be in bed for weeks on end after an abortion, unable to function properly. About two to four weeks afterwards, your period should return. It may look a little different, in terms of length or heaviness, but you'll soon after get back to your normal cycle.

Ultimately, if you have any questions about getting an abortion, ask your doctor. Even if you aren't currently pregnant, it doesn't hurt to seek out the correct information, because it helps to cut through the potentially harmful stuff we've been told about abortions in the past. The more you know, the better chance you'll have at taking care of yourself in the future — no matter what choices you end up making.