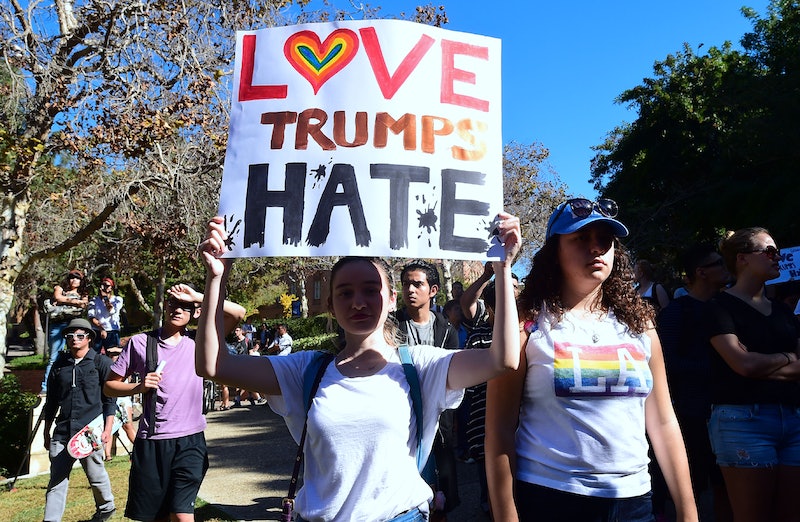 If you've turned your attention to the news at all over the past few weeks, there's a good chance you've seen the phrase "alt-right." An abbreviation of "alternative right," the movement has made headlines for its vocal support of Donald Trump. But in case there was any misunderstanding as to what the movement actually stands for, a Chrome extension that changes "alt-right" to "white supremacy" now exists.

Created by a New York advertising professional who goes by the pseudonym George Zola, the "Stop Normalizing Alt Right" plug-in automatically edits any mention of "alt-right" to "white supremacy" when installed in your browser. "This gentle-sounding name ['alt-right'] is the rebranding of white supremacy and white nationalism, and its normalization must be stopped," writes Zola on the extension's website. "Don't make this language of hate part of your vocabulary."

Following its release on Nov. 17, the extension has amassed over 1,700 downloads and 59,000 Facebook shares; it also recently debuted a new version, which uses "neo-Nazi" instead of "white supremacy."

"Stop Normalizing Alt Right" is not the only substitutive plug-in to emerge in recent weeks. Jay Smooth, a radio personality and cultural commentator, has launched "Alt-Right Denormalizer," which replaces any mention of "alt right" with "rebranded white nationalism."

What both of these plug-ins highlight, however, is a frustration with the media's seeming sanitation of the phrase "alt-right," and a glossing over of its ideologies — which, to be clear, disavow "multiculturalism" and favor the preservation of "the white race" in addition to (and sometimes, over) traditional conservative values of low taxes and limited government. As Bustle's Joseph D. Lyons recently put it, "Let's call the alt-right movement what it is: Racist, white nationalism."

In the post-election recalibrating that so many in this country conducted, there emerged a schism within the journalistic community. What is the difference between neutral and truthful? Where do we draw the line? How do we utilize strong language while remaining un-biased — especially when many journalists fear that they may be targeted in the near future?

In answer to those and many other questions, John Daniszewski, the Vice President of Standards for the Associated Press, recently penned a blog post outlining the official journalistic stance on the term "alt-right." In a portion entitled "Usage," he stated the following:

“Alt-right” (quotation marks, hyphen and lower case) may be used in quotes or modified as in the “self-described” or “so-called alt-right” in stories discussing what the movement says about itself.

Avoid using the term generically and without definition, however, because it is not well known and the term may exist primarily as a public-relations device to make its supporters’ actual beliefs less clear and more acceptable to a broader audience. In the past we have called such beliefs racist, neo-Nazi or white supremacist.

BOOM. It's no wonder a screenshot of that particular portion of the post has been making its way around social media:

As has an excerpt from the section following it, titled "Boilerplate":

ThinkProgress, too, made the same declaration as AP several days earlier:

Daniszewski's post emphasizes that the "alt-right" does not support "the democratic ideal of protection under the law" for pretty much everyone who's not a white, straight, cisgender dude. You know, women, people of color, LGBTQ people, immigrants, non-Christians. As in, much of the United States.

So whether you choose to download one of these plug-ins, or elect to be your own reverse censor, remember that normalizing hate speech and re-branding bigotry has, throughout history, time and time again, proven disastrous. Proven, for so many, fatal. We can't afford to do it again — so it's high time we stopped mincing our words.