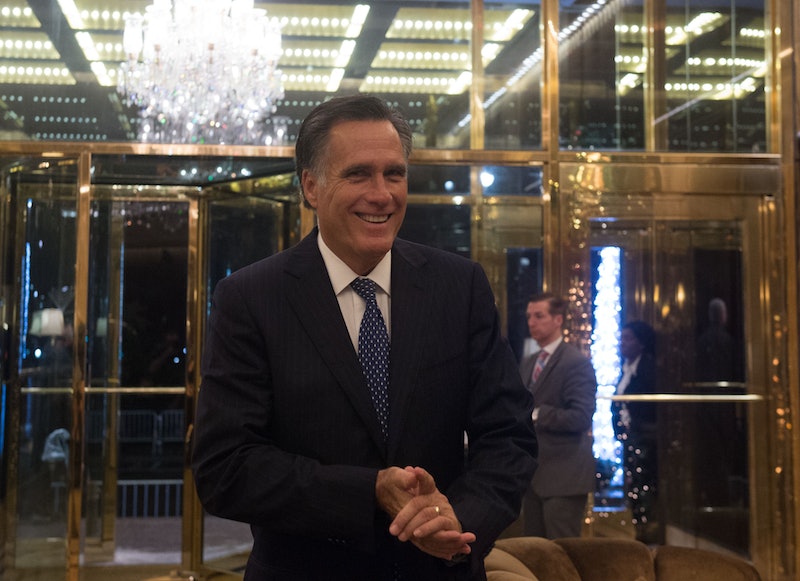 Throughout the presidential campaign, former Republican presidential nominee Mitt Romney criticized Donald Trump to anyone who would listen. Now that Trump has won, though, Romney has completely changed his tune. Amid rumors that the former Massachusetts governor might be nominated for Secretary of State, Romney met Trump for dinner at Trump Tower.

I can only imagine there was some level of awkwardness when the two men pretended to ignore the half a dozen massive elephants in the Michelin-star restaurant. Last spring, Romney openly criticized Trump and implored Republicans to nominate someone else. He called Trump "a phony" and a "fraud," even adding, "his promises are as worthless as a degree from Trump University." Trump, never one to be the bigger man, called Romney a "failed candidate" and a "choke artist."

Despite this beef, there's certainly evidence that Trump is considering Romney for the Secretary of State post, although members of Trump's own team have disparaged the idea to reporters. A recent CNN panel even discussed whether talk over the nomination is just an attempt by Trump to humiliate Romney as revenge for his earlier criticism.

I don't think that there is anything inherently hypocritical about the prospect of Romney accepting a position in the Trump administration. I've written before about the ethics of Trump critics who might work for him, and I concluded that working within the administration might be the best way to promote one's own policy beliefs and preferences and stopping bad policy. I am sure that Romney realizes this and I suspect he wants the job in part because he believes he knows better than Trump.

However, I do find it hypocritical that Romney seems willing to walk back his comments publicly in order to audition for the job. After the dinner, the man who was once Trump's severest critic had only sniveling praise and milquetoast comments about the "future," telling reporters:

Romney's praise of "the people [Trump] has selected," is particularly grating. Is he referring to Steve Bannon, who is beloved by many white supremacists and is accused of being one himself (an accusation Bannon has denied, telling The Hollywood Reporter "I'm not a white nationalist, I'm a nationalist. I'm an economic nationalist.")

Romney's recent remarks mark an upsetting change from a Republican who earned respect even from Democrats for his uncompromising honesty during the campaign. Perhaps Romney's criteria for a "better future" is simply one in which he has more power.