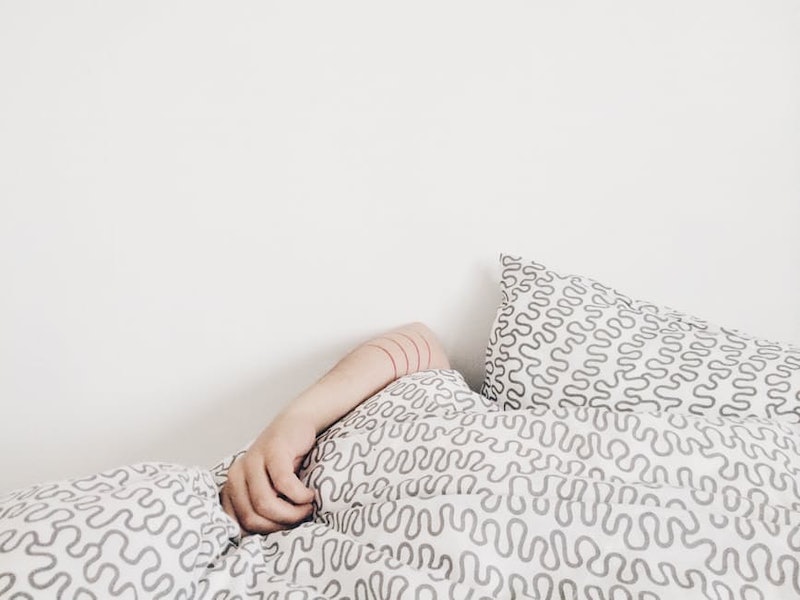 If you've ever woken from a scary dream about monsters, only to discover that your cat is climbing across your face, then you already know there are ways to explain your weird dreams. It seems the visions we have at night are often connected to what happens during the day — and sometimes even to what's going on in our rooms while we sleep.

I've had dreams about crawling through the desert when my A/C was broken. And I've definitely had a few nightmares about fire alarms, only to startle awake to the sound of my annoying alarm clock. If you think about dreams in this sense, the connection makes a lot of sense.

But occasionally we all have dreams that come with a decided lack of explanations. They can be funny, or sexy, or downright bizarre. And sometimes, they can even become a bit unnerving. If that's the case for your nighttime dream reel, it can help to talk with someone.

"Sharing your nightmares, discussing them with others who are interested in dreams, and thinking about their insights about your dream or nightmare can ... provide relief," says Dr. Angel Morgan, Director of Reflectors and Advisory Board Member for the dream interpreting website DreamsCloud, in an email to Bustle. But even if you aren't bothered, it can be fun to uncover why your brain gets so strange at night. Read on for some of the things that can affect your dreams, according to science.

1. Sleeping On Your Stomach

2. Your Love Of Video Games

If you're an avid gamer, you might have more control of your "dream self" while sleeping, according to Pincott. It sounds strange, but makes total sense if you think about how skillful maneuvering in a virtual environment could translate into the context of your dreams. Pretty cool, right?

3. Having A Lot On Your Mind

If you're strugglin' with something during the day, the problem will probably make an appearance in your dreams. This is even more likely if you lie awake worrying for a few hours. "If you are thinking about something before bed, like a problem you’d like to solve, often those thoughts weave into your dreams," says Morgan. This connection has been researched by dream experts, and to me, makes a helluva lot of sense.

4. Whether Or Not You Ate Cheese

Did you partake in some 30 Rock-worthy night cheese? If so, it could mean you'll be in for a night of vivid dreams. Pincott pointed to a study done by Tore Nielsen, Ph.D, at the University of Montreal. Apparently, he found the most commonly mentioned dream-disturbing foods contain dairy. "Nielsen explains that when dairy dreams are distressing, the problem could be an undiagnosed sensitivity to dairy (indigestion, cramping, gas), which is incorporated into the dream as disturbing symbols or emotions," she said.

5. Smells Wafting Around Your Room

If you've ever had a breakfast-themed dream whilst your friend made pancakes, or dreamt about fire after blowing out a candle, then you already know how scents can affect your dreams. This happens because "dreams are sleep protective," J. Catesby Ware, Ph.D., told health writer Kim Tantrell in Woman's Day. "So instead of waking up, you incorporate those stimuli into your dream."

If you have a thing for art — or stare at a canvas all day for work — it's more likely you'll have interesting dreams, Morgan tells me. She says creative types are the ones to have the most vivid nighttime visions. (Perhaps all thanks to a sparkling imagination?)

If you're pregnant, or just had a baby, then you may notice an uptick in your weird dreams. "Studies have found that it's common to have extremely vivid dreams during pregnancy and your baby's infancy, likely due to a mix of emotions, lack of sleep and fluctuating hormone levels," Tranell said. As if you need something else to do deal with, right?

Us ladies with night owl tendencies may be more prone to nightmares, according to another study by Nielsen. "One theory, he explains, is that go-to-bed-late types wake up at an earlier-than-usual circadian phase, in which dreams (or nightmares) are their most intense — and memorable," Pincott explained. As someone who has strange dreams after pulling all-nighters, I can totally vouch for this.

9. You're Trying To Focus On Something Else

During the day, it's much easier to keep annoying/dark/sad thoughts at bay. But the moment you fall asleep, the brain becomes a total free-for-all. This is all thanks to the thought-wrangling prefrontal cortex, which essentially turns off when you dream, according to Pincott. One study, at the Goethe University of Frankfurt, tested this by asking volunteers to suppress thoughts before going to sleep. "Not only was the thought likelier to intrude in their dreams, but suppressing it also led to more nightmares overall," Pincott said. Not cool, brain. Not cool.

10. You Had Spicy Food For Dinner

If you made a late night trip to the taco stand, those spicy nachos could come back to haunt you in the form of a nightmare. Or, at least, one you're more likely to recall. As Tranell said, "Anything that could cause indigestion — cheese, spicy foods, a big meal — makes you stir more, meaning you have a better shot of remembering that nightmare." Makes sense to me.

Good on you for taking a antidepressant medication to feel better. Don't be surprised, however, if you start having stranger dreams. "They've been shown to make REM bursts more intense in the people who take them," Dr. Deirdre Barrett, Ph.D., told Turnell. It could be kinda fun, but is worth telling your doctor should the dreams become annoying.

Strange dreams, depending on your preferences, can be a welcomed part of your night — or downright maddening. Whatever your opinion may be, at least now you may have a better idea as to the cause.