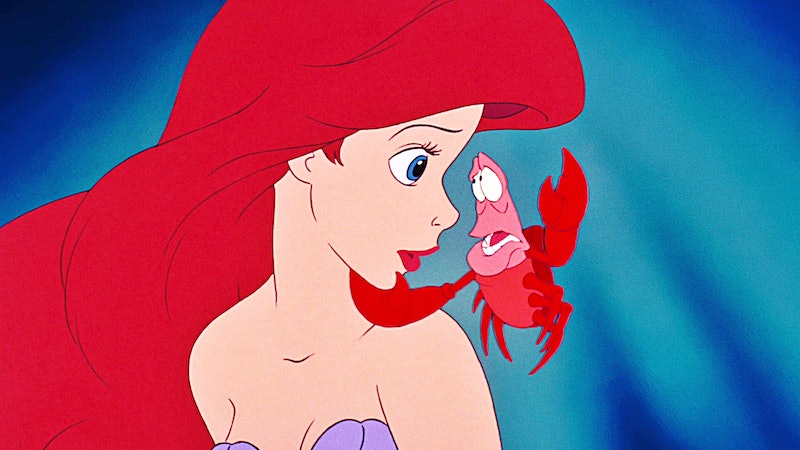 Is nothing sacred in 2016? First, the year robbed the world of all its best musicians, then the Great British Bake Off fell apart, and, oh, yeah, the election happened. Now, 2016 has unmasked Ariel's cautious friend Sebastian as a total fraud. According to Refinery29, Hearst editor Alexis Nedd made the shocking discovery that Sebastian's real name is Horatio and shared the news on Twitter. As you can imagine, The Little Mermaid fans are not amused.

Sebastian's true identity has been hiding in plain sight all along. The crab's full name can be found on the Disney Princess website, and it's pretty nuts. Sebastian is actually Horatio Felonius Ignacius Crustaceous Sebastian. Yeah, that means Sebastian is actually his surname, and Ariel's friend should be referred to as Horatio — not that anyone can be sure Ariel even knows Sebastian is his last name. Nothing makes sense in this topsy turvy world anymore.

The revelation that Sebastian is actually a five-named crab better known as Horatio, at least to his mom, has not been met with enthusiasm. Sebastian simply does not look like a Horatio, and, let's be real here, having Crustaceous in his name is just weird since he is a crab. Nothing about this makes sense unless Sebastian/Horatio has been leading a double life this whole time. He could even be working for Ursula. How can he be trusted when he doesn't even tell his best friend his proper name?

The Little Mermaid fandom is understandably shaken by Horatio-gate and they have taken to Twitter to express their outrage.

Some fans were simply disillusioned. I mean, at this point, 2016 has conditioned everyone to expect the unexpected. Of course Sebastian is actually Horatio. Flounder probably goes by Bob on the other side of the ocean too.

Other fans just embraced the impending sense of doom. If you can't trust Disney, what can you trust?

At least one fan simply wants answers about the whole Crustaceous thing. It really is an odd choice. It's like his parents were afraid he would forget he was a crustacean if they did not include the title in his long list of names.

But wait, there may be one more twist to this story. Could Sebastian have been Horatio all along? One fan pointed out Sebastian's full name is actually announced in the movie upon his first entrance alongside King Triton. That means Sebastian was always Horatio, but no one ever noticed.

See, guys, here is Sebastian's first and only formal introduction.

OK, so what this news actually means is everyone needs to go re-watch The Little Mermaid as soon as possible. In the meantime, feel free to break out this little piece of Disney arcana at your next trivia night.