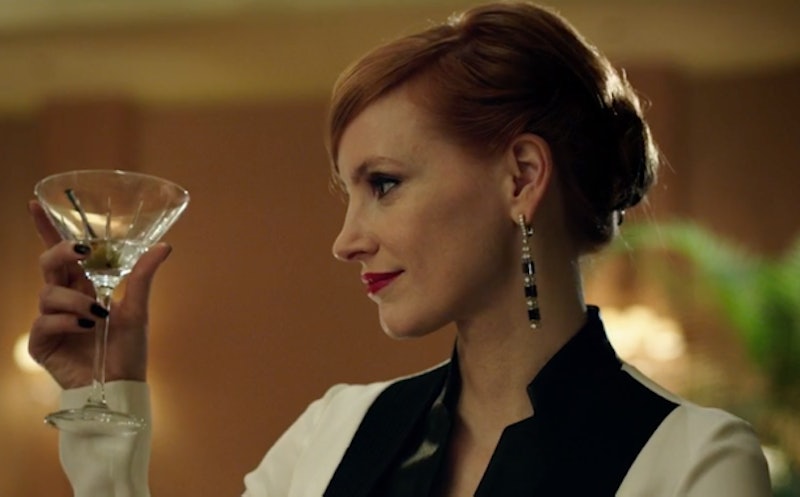 Is there a more vilified figure in American politics today than the dreaded lobbyist? Most often thought of as highly-connected sellouts using their clients' wealth to influence policy that favors Big Oil, Big Tobacco, and Big Pharma over the American public's best interests, not all lobbyists fall into the category of evil corporate lobbyists. Some are actually trying to do some good, like the titular character in the new film Miss Sloane. She takes on the NRA's powerful gun lobby, which is no easy task, but is Miss Sloane based on a real person?

It's not, at least not in the way you're thinking. The movie is an original work, and while many wish that there really were a powerful female lobbyist named Elizabeth Sloane taking on the NRA in Washington, that's not the case. The film was written by Jonathan Perera, and it marks his debut as a screenwriter. Not only that, but according to IMDb, the script is his and his alone — it's completely free of any studio meddling, rewrites, or punch ups. And while Elizabeth Sloane isn't a real person, Perera did somewhat base her on an actual person, just not someone whom you would guess — he based her on his own mother.

"Miss Sloane was actually somewhat based on my own mother," the screenwriter told Zach Laws of Gold Derby. "I was raised singlehandedly by my mother, and the good traits of Miss Sloane are the facts that she's incredibly smart, she works very quickly, she's stubborn, she's kind of like a bulldog — she gets her teeth into something she doesn't let go, she takes no prisoners... that all comes from my mother." In addition to his mom, Perera also did loads of research on lobbyists, who are responsible for Sloane's less favorable personality traits — not his mother. "The more deceitful and manipulative aspects [of Miss Sloane] came from my research of the lobbying world generally, and just my desire to make the movie as entertaining as I could," he said.

As far as how Miss Sloane comes across on screen, it's actor Jessica Chastain who is most responsible for that. "She in her mind constructed the character's backstory completely of her own volition," Perera said of the star. "She never asked me a single question about who Miss Sloane was, she wanted to fill in all of those blanks herself as opposed to being spoon fed the answers."

Even though Miss Sloane isn't based upon a real Washington lobbyist, her traits as a strong and hard-working woman come from the screenwriter's single mother, without whom this powerful movie would never exist.

More like this
The Biggest Differences Between 'Bullet Train' & The Book It’s Based On
By Arya Roshanian
Naomi Osaka & Emma Raducanu’s Experiences Have Inspired A New Amazon Show
By El Hunt
What's New On Netflix: A Third '365 Days' Movie & Lili Reinhart’s New Film
By Arya Roshanian
We’ve All Had Bad Sex. Nona Willis Aronowitz Is Talking About It.
By Sophia Benoit
Get Even More From Bustle — Sign Up For The Newsletter