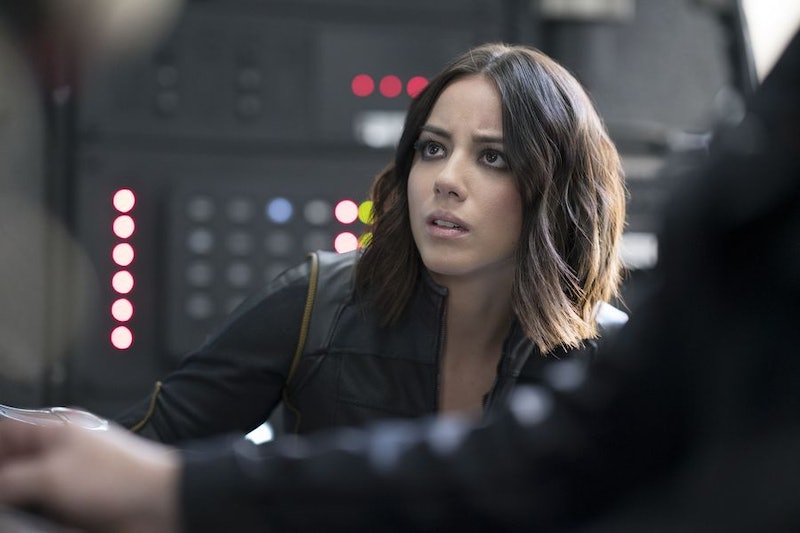 This season, Agents of S.H.I.E.L.D. has gone darker and more mysterious. With the addition of Ghost Rider and the rise of a new director, Jeffery Mace, our team has taken on some challenges. Fitz and Simmons, while still together romantically (thankfully), are working mostly in secret from each other; the group is mostly disbanded with Daisy on the run; and Coulson is having trouble staying out of things when it comes to his team's safety. With so many pieces in play, you can bet that when Agents of S.H.I.E.L.D. Season 4 returns from hiatus, it owes us some answers.

But first, we should take a look at when the show returns — which is something to get excited about. Though the past two seasons have returned from winter hiatus in March, ABC announced after the midseason finale that Agents of S.H.I.E.L.D. will pick back up on Tuesday, Jan. 10. (This may be because, for the past two years, Agent Carter has taken S.H.I.E.L.D.'s time slot from December to March, but tragically, the show was cancelled last season). I'm so relieved that we only have to wait a few weeks for more, because I have a ton of questions

What Will Become Of The New Director?

Over the past few episodes, Director Jeffrey Mace has revealed more and more about himself and his agendas. We know that in Marvel Comics, he becomes a superhero known as The Patriot, who has ties to Captain America. Of course, the show could go off in its own direction, as it has with many popular comic book characters in the past. Still, we have a lot to learn about Mace. What's his real purpose?

Will We Get Back To The Inhumans?

Are we ever going to come back to the ramifications of the Sokovia Accords and what they mean for Inhumans? We kind of saw the storyline stall out in favor of Uncle Eli's important book, but Daisy, Robbie, and so many others are still out there and under jurisdiction.

Is Robbie Gone For Good?

First, we saw Robbie coax back his Ghost Rider spirit from where it had taken over Mack by promising to settle his score. But will we really see Robbie owning his debts? He disappeared in the midseason finale, so it all hinges on what exactly happened to him and when (or if) we'll see him again.

Will Coulson & May Finally Become "Philinda"?

It's the question fans have been asking since the pilot episode: Will Agent Coulson and Agent May become a "thing"? The actors have both teased their feelings about becoming more than friends, and when Coulson disappeared with Fitz, May was more than a little upset. But now that AIDA has taken May's place and we have no idea where the real May is, I'm not expecting to see them ride into the sunset any time soon.

I want Daisy to find love and happiness again, but that's probably too much to hope for, given how badly she's been burned already. And I wouldn't exactly trust falling in love again after what happened to Ward and Lincoln. But I hope there's a way Daisy can still find some happiness in Season — maybe in the form of finding a good friend in Robbie.

No matter what happens in the second half of Season 4, we can count on the Agents of S.H.I.E.L.D. team to protect each other and fight for the good of the world.