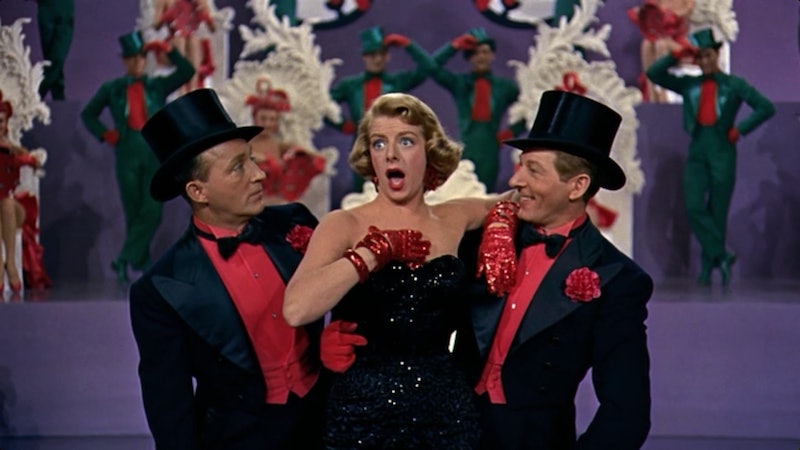 When it comes to holiday movies, there is almost an endless supply of films to watch. However, actually watching them can sometimes be a bit tricky. Many people today don't subscribe to cable, or even network television, and therefore miss out on the constant movie broadcasts throughout December. That leaves the option of either buying/renting holiday movies (usually not in the cards during the purse strings-tightening holiday shopping season) or streaming them. So for those who have only the option of streaming their holiday movies this year, I'm here to tell you that White Christmas is the one holiday movie to watch on Netflix this December.

Netflix offers a lot of holiday fare this year, but the vast majority aren't exactly what most people would consider to be classics. But few people would deny the draw of White Christmas, a movie that is still widely respected as a holiday classic 62 years after it debuted. Only 1946's It's a Wonderful Life and 1947's Miracle on 34th Street have had a longer shelf life when it comes to ancient holiday movies that are still considered required viewing in 2016, but why is that?

For one, the cast is amazing. There's arguably no celebrity who's more associated with Christmas than Bing Crosby, whose timeless carols still dominate radio stations and department store playlists every December. In addition to him, there's also Rosemary Clooney, another legendary star from Hollywood's Golden Age who was known mostly as a successful singer in addition to being an actress. Then there's Danny Kaye, a crazy-talented entertainer known as a comedian, singer, dancer, TV star — you name it. And rounding out the main cast is Vera-Ellen, who was such a gifted dancer that she managed to become a Radio City Rockette, despite being only 5'4", before moving on to Hollywood stardom.

Another terrific aspect of the film is the music. The talent on camera were largely known for their musical abilities, and the songs composed by the legendary Irving Berlin really allow them to shine. The title track is of course a standout, but there are a number of other less-heralded gems that are also tremendous, like "Snow," "Sisters," and the delightful "Count Your Blessings;" which was nominated for a Best Original Song Oscar.

Also, and this may not sound like a positive at first, but the film isn't all that Christmasy. With the exception of the big (and wonderful) conclusion, the bulk of the film isn't really centered around the holidays. Many Christmas movies really beat you over the head with so much holiday cheer that you're sick of it by the time you've watched a couple films, but White Christmas doles out its Christmas spirit in small doses, instead focusing on the main themes of romance, loyalty, and generosity.

White Christmas is wholly deserving of its classic holiday movie status, and it's definitely a lucky break for Netflix subscribers that the movie is streaming this December.