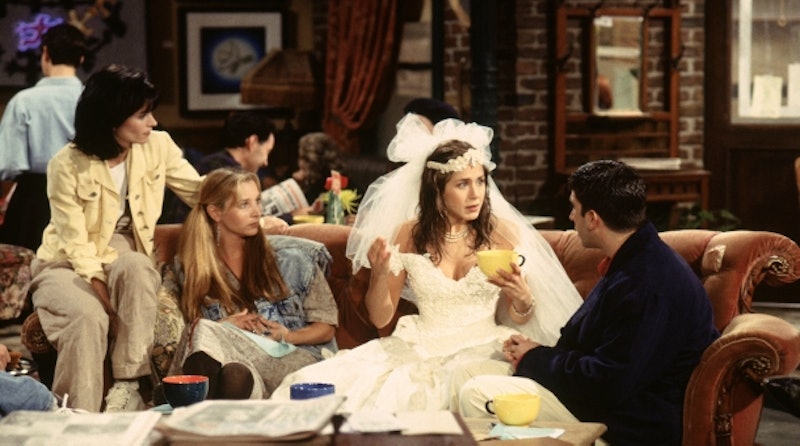 I have a feeling this might be controversial, because it's something we've all been asking for for a long time. Myself included. But Jennifer Aniston doesn't think a Friends reunion is a good idea, and I tend to agree with her. Over a decade after Friends went off the air in 2004, and with the hit show airing pretty much every day in syndication, the actress is still tirelessly fielding questions about a possible reunion. In fact, that's what she did in an interview with ITV’s Lorraine Kelly that aired Thursday. When asked if fans could expect a reboot of the classic, Aniston didn't mince words, saying that she doesn't know what a reunion would look like, but that fans probably wouldn't like it even if they got it.

"I don’t know what we would do. I think that period of time was sort of nostalgic, you know? I think people have such affection for it, even though it was only 12 years ago since it ended..." she said. "There was something about a time where our faces weren’t shoved into cellphones and we weren’t, like, checking Facebook and Instagram, and we were in a room together, or at a coffee shop together, and we were talking... having conversations. And we’ve lost that."

Think about it: what ground is there left to cover? Would any of us really want a version of Friends set in 2016, where doors are locked and the former roommates live in different neighborhoods and have no time to hang out because they're focusing on their families? Do you need to see Monica obsessed with Candy Crush and sending constant Facebook messages asking you to join?Joey accidentally Snapchatting his weiner and sharing it with all of his friends? Or Phoebe refusing to talk to anyone before she gets on better terms with Siri?

Actually, to be honest, I would absolutely watch that third episode, but the point is that we already have what we want. As lovers of the show, the sentimentality and nostalgia that we feel about Friends is proof that it has already served its purpose. In Aniston's words, "it makes [fans] feel better when they are down, when they want to distract themselves, because it’s always on, you can pretty much find it anywhere."

And she's right. Just turn on your TV between the hours of 6:00 p.m. and infinity, and you can probably find "The One We All Remember", and happily quote along with every line. The feeling that you'll get from doing so is familiar, and special, and exists in a specific moment. For that very reason, it isn't easily replicated. Friends was a lightning strike that made a lot of people feel a lot of things for 10 long seasons, and maybe that could be enough. Maybe, instead of risking the way we feel about the original by demanding more and more and more, we can be happy with what we have. Because what we have is a lot.