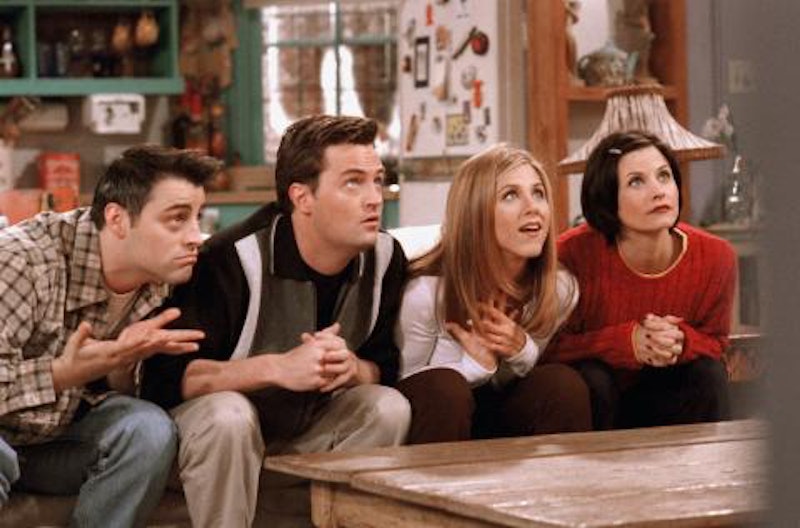 It’s a sad day for Friends fans, because, in a recent round table with other comedy show runners over at The Hollywood Reporter, Marta Kauffamn said there would not be a Friends reunion in no uncertain terms. Not now. Not ever. In fact, when asked about a possible reunion, Kauffman said without a minute of hesitation, “I don’t know how many ways we can say no.” That sound you hear, by the way, is the sound of millions of Friends fans’ hearts breaking. Because that means no more Chandler jokes. That means no more of Ross’ amazing physical comedy. That means the 10 seasons of Friends that we got back in the ‘90s and early ‘00s are all we are ever going to get.

But before you go lock yourself in a closet and cry for the rest of your life, keep in mind that there are ways of looking on the bright side, even though there will never be an official Friends reunion. When it comes to beloved comedy sitcoms, the situation could be way worse.

After all, it’s not like these former cast mates are holing themselves up in a closet like you just wanted to do and never giving fans anything for their time. Unlike some former television and film stars who are never heard from again, these former cast mates still give fans plenty to talk about, even if a formal reunion won’t ever be one of them.

1. The Show Will Always Speak For Itself

As much as I love revivals and reunions, there's always something about trying to make something old into something new that inevitably taints the original. Seeing Chandler as a man living 2016 might really kind of ruin the Chandler we knew and loved in 1995. With no reunion ever happening, the show totally speaks for itself. It’s like a time capsule that we all have the privilege of digging up and revisiting whenever we need a fix. Thanks for that, Netflix.

2. We Already Got A Mini Reunion

Let’s not forget the gifts that we have been given. The Friends did sort of reunite already, even if Matthew Perry wasn’t able to make it. Beggars can’t be choosers, people.

3. The Cast Is Still Friends

Like, legitimate friends. The fact that I can pull up pictures of Courtney Cox and Jennifer Aniston on a beach together today makes me feel like mini Friends reunions are happening every time they hang out.

4. They All Still Love The Show

They could be a bunch of bitter and embarrassed actors, but, instead, all of these actors appreciate what the show was and what it did for their careers. Gratitude in and of itself is a lot to be thankful for.

These guys could have run for the hills the minute this show ended. I wouldn’t have blamed them for the attention and fandom that it drew. But, lucky for all of us, each of these former Friends are still in the limelight and still creating new content for all of us to enjoy.

6. There Won’t Be A Revival

I know this sounds like blasphemy, but am I the only one who sort of cringes when I hear that there is going to be a revival of something I once knew and loved? Sure, the build-up is always super exciting, but the real thing is always somehow slightly disappointing. I like that I won’t have to live with that kind of emotional roller coaster in my life when it comes to Friends. Thank you for that, Marta Kauffman.

TV has changed. The things we have come to expect from 30-minute shows have changed. We don’t watch shows like we used to. And laugh tracks make me super uncomfortable. I’m glad Kauffman has put the final nail in this coffin and let us all move on with our lives already.

Now excuse me while I go binge watch all 10 seasons and try to remember how lucky I am to have every single one.

More like this
Jennifer Aniston Is Still Wearing That 'Friends' Dress She Stole From Monica's Closet
By Jake Viswanath
Emma Thompson, Lashana Lynch, & Stephen Graham Lead Netflix’s 'Matilda'
By Sophie McEvoy
Jennifer Aniston Spoke Out About *That* Viral TikTok
By El Hunt
Everything To Know About 'My Big Fat Greek Wedding 3'
By Grace Wehniainen
Get Even More From Bustle — Sign Up For The Newsletter