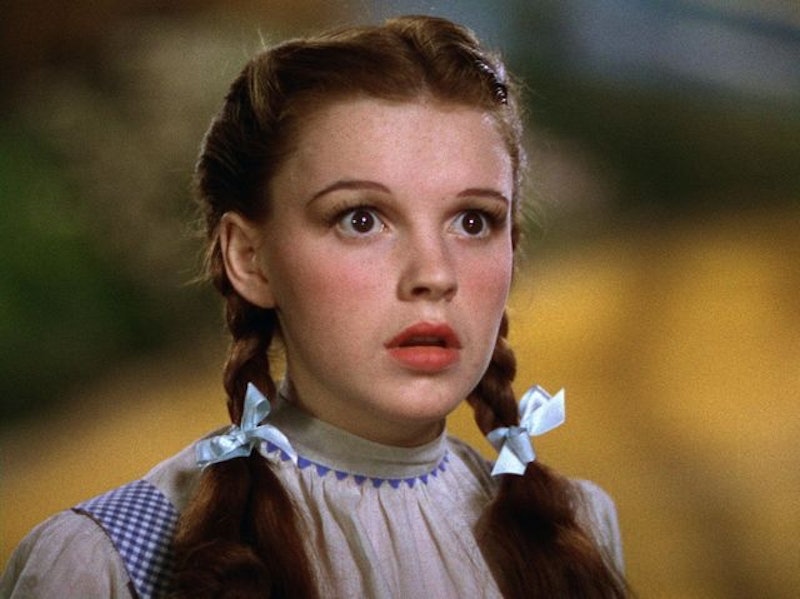 Now, let me be clear: for the most part, these are not anti-heroes who are supposed to be terrible. These aren't the Holden Caulfields and Prince Hamlets of the world, who are meant to be sad and bratty. These are the characters who a lot of people genuinely like, but who are actually just human dumpster fires with no impulse control. But we never noticed that they were terrible, because we read these books when we were young, or we're only familiar with the squeaky clean Disney-fied adaptation of the source material.

And don't get me wrong, I still love a lot of these characters. Being a terrible person doesn't make you a terrible book character. But still, we need to be honest: these fictional "heroes" are just the worst.

Like, yeah she's cute and she has a dog, but she murders two people. Is manslaughter not a crime in Oz? We're just cool with executing witches without a trial now? In one of the later Oz books (albeit not written by L. Frank Baum), Dorothy sees an innocent person in a witch costume and immediately starts dumping water on them with no provocation. Damn, Dorothy. You can't do that. And those slippers are not yours.

Mary Poppins has no business being in charge of children. No business. Disney mellowed her out in the movie adaptation, but in the books she's strict, vain, selfish, and she gaslights children—every time the kids ask about her magic, she scolds them for being "bad" and claims to have no magical powers. And yet? She allows children to be transported to a planet full of cats with no supervision? That's not very responsible, Mary.

Encyclopedia Brown is just terrible and no one can convince me otherwise. Sally Kimball deserves better. Mostly he's just an entitled little snot who thinks that everyone wants to hear his opinion (they don't). And the first page is the same in every book! No one wants that! Encyclopedia is constantly mucking around in crime scenes, and his terrible policeman father enables him. I posit that Encyclopedia Brown is committing all these crimes and then miraculously "solving" them because he's so desperate to win his inattentive father's love.

Yeah, Heathcliff is just as bad as Cathy from Wuthering Heights, but at least Heathcliff had a rough childhood that explains some of his behavior. Cathy is just garbage. She loves Heathcliff, but she won't marry him because it would "degrade" her, and then she's furious at him for leaving her?? You are creating all of your own problems, Cathy! Please just date Heathcliff or break up with him, don't keep going back and forth until you die in childbirth and then haunt him forever, that's so rude.

Honestly? Where do people get the idea that Pinocchio is anything other than a demon puppet that's been brought to life, Chuckie-style? The Disney movie made him all cutesy, and cut the part where he kills the talking cricket and also where he's hanged for his crimes. His bad behavior might come off as charming but dude murders a sentient cricket and steals Geppetto's wig.

Both of them. I couldn't choose. Both are terrible. Look, I know that the internet doesn't need any more people piling on Bella and Edward and yes, I enjoyed the Twilight books as a preteen, too. But man are these two worse than ten thousand Cathy and Heathcliffs. Bella has little to no agency. Edward is an elderly man stalking a teenage girl. They name their baby Renesmee. There are no winners here.

I'm cheating a little, because Phoebus isn't exactly a hero in The Hunchback of Notre-Dame. But somehow people know this character from the unsuccessful Disney movie better than from the wildly successful Victor Hugo novel. In the movie, he's handsome and helpful. In the book, he's handsome and he just wants to have sex with Esmeralda before letting her be executed for his murder (even though he isn't dead). Plus he steals her goat before marrying his mean cousin. Terrible.

Sorry, but Charlie is bad. Willy Wonka is worse, but Charlie is supposed to be our hero. What gives, Charlie? Why would you not immediately report Wonka to the Better Business Bureau? He's possibly a murderer. At the very least, his factory is unsanitary, what with the kids being sucked into chocolate rivers. And he pays his oompa loompas in chocolate beans, which cannot possibly be legal.

I know you had that Audrey Hepburn poster in your freshman year dorm room, but Holly Golightly from Breakfast at Tiffany's is just... pretty racist in the book. Like, very racist. And kind of homophobic. She uses a lot of slurs and talks a lot about which races she is and isn't attracted to... maybe at the time it came across as quirky, but now it's... fairly horrifying.

Tom Sawyer is a nightmare of a child. Not just because of the fence thing, either. He watches his own funeral with minimal remorse for the suffering of his loved ones? He and Huck witness a murder and are just like... "meh, we won't tell anyone about it"? Yikes.

So... we all understand that Peter Pan is a terrifying god-like being with no human sense of empathy, right? We understand that? He's an immortal solipsistic child deity who "thins out" the Lost Boys when they get to old (so he kills them? Oh god he kills them). The book is very explicit about his wish for all grown ups to die, and the fact that he occasionally switches sides while fighting the pirates, just for fun. Let's all hope that Peter never appears in our windows late at night.