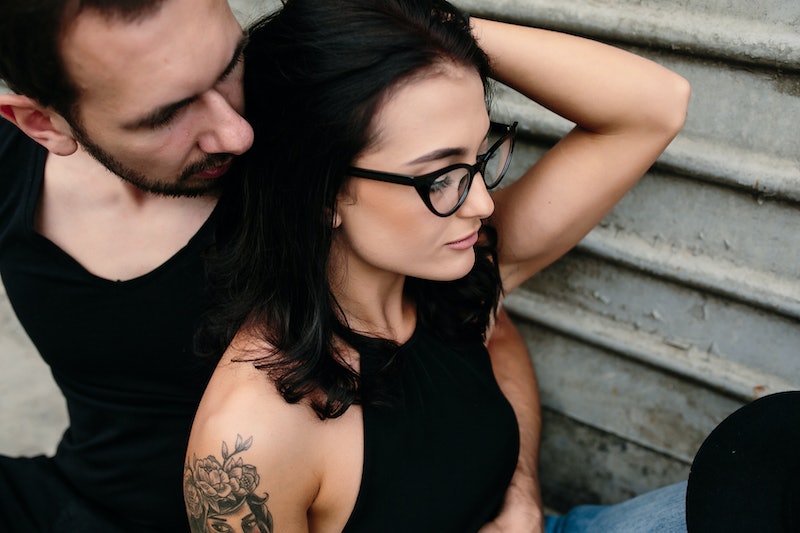 A new study out of the University of Minho in Portugal is shedding some light on why people stay in bad relationships. It found that the more time, money, and/or effort people invest into a hypothetical relationship that's a bad fit, the more likely those people were to stay in that relationship. In psychology, the evolutionary impulse behind this type of risk-aversion is called the sunk cost fallacy. Basically, people are more willing to continue investing in something they've already invested in, even if it's hurting them, rather than cut their losses and embark on a riskier, but truly open-hearted, search for a strong fit. The study, which was published in Current Psychology by psychologists Sara Rego, Joana Arantes, and Paula Magalhães, was completed over two experiments surveying 951 participants and 275 participants, respectively.

In the first experiment, participants were given a hypothetical model of a failing marriage, with grievances including communication issues ("little things turn into big discussions and you feel that you can no longer communicate with your partner"), going months without sex, going out of their way to avoid seeing their partner, and a belief that they would be happier if the marriage ended. This was the control scenario. They were then given the same scenario with three different investment variables — time, money, and effort — and asked if they would choose to end the marriage or continue it.

The second experiment asked its 275 participants how much time they'd continue to invest in the control scenario of a one-year marriage versus in the control scenario of a 10-year marriage. This was measured in two ways. First, participants marked how much time they'd continue investing in the marriage on a ruler labeled "no time" at one end and "a lot of time" at the other. Most participants marked around the halfway point in both the one-year and the 10-year relationship. But when they were asked to quantify how much time that meant to them in days, there was a huge difference in their perceptions of a medium amount of time. For the one-year relationship, they were only willing to try and make it work for 289 days. For the 10-year relationship, they'd be willing to stay for 583 days. That's a difference of about nine-and-a-half months versus over a year-and-a-half.

The study confirmed researchers' initial hypothesis that sunk cost fallacy would apply to relationship investments just like in other types of risks, though its hypothetical methodology would have to be replaced in future experiments with real-life relationships for further study.